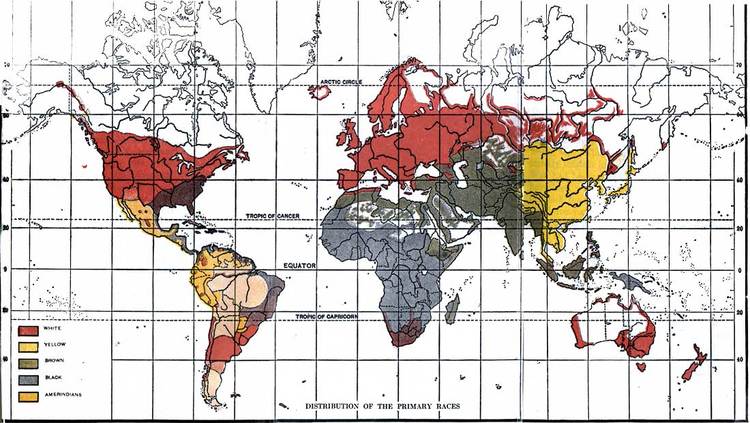 Everyone accepts that it's OK to read great thinkers of the past, like Aristotle, Hobbes, or Marx, who believed in things—slavery, absolutism, communism—that we abjure today.

But strangely, when it comes to the great racial thinkers of the past, this rule is suspended. So complete has been their effacement by the liberal establishment, so far beyond the pale of legitimate opinion have they been pushed, that it's almost unnecessary to repress them anymore.

But in their day these men were best-selling authors and respected scholars. They produced some serious thinking on race that I have recently been trying to rediscover. The first of my rediscoveries: Lothrop Stoddard.

Stoddard (1883-1950) was no marginal figure. He came from a distinguished New England family, had a PhD in history from Harvard, and wrote 14 well-respected books. A lifelong Unitarian and Republican, Stoddard was also a member of the American Historical Association, the American Political Science Association, and the Academy of Political Science. 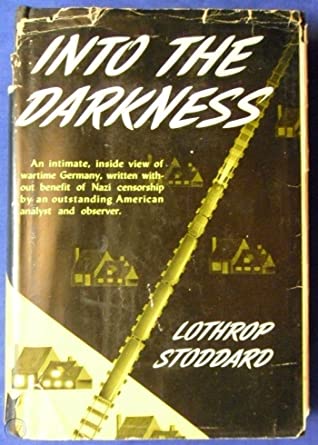 As with most thinkers, not everything he said can be endorsed. What he wrote, mainly in the 1920's and '30's, reflects the snobberies of that time—for example, the old WASP preference for (surprise, surprise) Northern Europeans over Southern or Eastern ones. I accept this attitude as a natural preference for one's own kind but must dismiss it if it's proposed to inform serious politics in this country today. But, since Stoddard also wrote of the dangers of internecine jealousies undermining the unity of whites, I can forgive him. Stoddard was not, as liberal critics like to tar all race-conscious thinkers, a Nazi or anything like it. In fact, he wrote a book critical of Nazi Germany entitled Into the Darkness, and he saw, years before the Nazis became significant, the essential falsehood of their core racial myth:

"Indeed the national-imperialists presently seized upon race teachings, and prostituted them to their own ends. A notable example of this is the extreme Pan-German propaganda of Houston Stewart Chamberlain and his fellows. Chamberlain makes two cardinal assumptions: he conceives modern Germany as racially purely Nordic; and he regards all Nordics outside the German linguistic-cultural group as either unconscious or renegade Teutons who must at all costs be brought into the German fold. To anyone who understands the scientific realities of race, the monstrous absurdity of these assumptions is instantly apparent. The fact is that modern Germany, far from being purely Nordic, is mainly Alpine in race. Nordic blood preponderates only in the northwest, and is merely veneered over the rest of Germany, especially in the upper classes… To let Teuton propaganda gull us into thinking of Germany as the Nordic fatherland is both a danger and an absurdity." (The Rising Tide of Color p .202)

This is the only place I know where Nazi ideology is refuted on its own terms.

Let's look at some key passages from Stoddard's magnum opus of 1920, The Rising Tide of Color. The first passage that really got my attention was his warning (in 1920!) that an obscure variety of Islam called Wahhabism was destined to be a major source of trouble for the Western World:

"The brown world, like the Yellow world, is today in acute reaction against white supremacy... The great dynamic of this brown reaction is the Mohammedan Revival…

"Islam's warlike vigor has impressed men's minds ever since the far-off days when its pristine fervor bore the Fiery Crescent from France to China. But with the passing cycles this fervor waned, and a century ago Islam seemed plunged in the stupor of senile decay. .. Yet at this darkest hour a voice came crying from out the vast Arabian desert, the cradle of Islam, calling the Faithful to better things. This puritan reformer was the famous Abd-el-Wahab, and his followers, known as Wahabis, soon spread the length and breadth of the Mohammedan world, purging Islam of its sloth and rekindling the fervor of its olden days. Thus began the great Mohammedan Revival.

"That revival, like all truly great regenerative movements, had its political as well as its spiritual side. One of the first things which struck the reformers was the political weakness of the Moslem World and its increasing subjection to the Christian West… The result in Islam was a fusing of religion and patriotism into a 'sacred union' for the combined spiritual regeneration and political emancipation of the Moslem World...

"No more zealous Moslems are to be found in all the ranks of Islam than those who have sojourned longest in Europe and acquired the most intimate knowledge of its sciences and ways. Mohammedans are keenly alive to the ever-shifting uncertainties and divisions that distract the Christianity of today, and of the woeful instability of modern European institutions." (p.56)

Here Stoddard lays bare all the things we are missing today in the analysis of these questions—a grasp of the broad sweep of history beyond anything within the reach of the neocon imagination; honesty about the reality that a Nietzschean racial will-to-power lies in the background of Western relations with the Moslem world; a prescient recognition of the key fact about these fanatics that puzzles the globalist consensus—that they are not seduced by our society on contact, like East German teenagers guzzling their first Coca-Colas.

Stoddard wrote more about Islam in his book The New World of Islam. His ability to see things from an adversary's point of view is remarkable, and gives the lie to the myth that only people indoctrinated in multicultural sensitivity can do this. (In fact, of course, multicultural ideology tends to produce the opposite effect, as it teaches that "we're all the same" and forbids honesty about the core Hobbesian fact of relations between peoples: they are often enemies.)

Another contemporary problem whose racial aspect is taboo to discuss is cheap Oriental labor. Stoddard wrote:

"Assuredly the cheapness of Chinese labor is something to make a factory owner's mouth water… With an ocean of such labor power to draw on, China would appear to be on the eve of a manufacturing development that will act like a continental upheaval in changing the trade map of the world." (p.244)

Stoddard also foresaw the Third World unarmed invasion scenario made famous in Jean Raspail's novel The Camp of the Saints decades before it began to become visible:

"And let not Europe, the white brood-land, the heart of the white world, think itself immune. In the last analysis, the self-same peril menaces it too. This has long been recognized by far-sighted men. For many years economists and sociologists have discussed the possibility of Asiatic immigration into Europe. Low as wages and living standards are in many European countries, they are yet far higher than in the congested East, while the rapid progress of social betterment throughout Europe must further widen the gap and make the white continent seem a more and more desirable haven for the swarming, black-haired bread-seekers of China, India and Japan…We shall not be destroyed, perhaps, by the sudden onrush of invaders, as Rome was overwhelmed by northern hordes; we shall be gradually subdued and absorbed." (p. 289)

Stoddard wrote about one factor in the racial conflict of our time that tends to be ignored by Americans: the fact that the white race used to feel a sense of solidarity before World War I. The collapse of this sense of solidarity was one key to the unraveling of the white world's instinct for racial self-preservation:

"Thus white solidarity, while unquestionably weakened, was still a weighty factor down to August 1914. But the first shots of Armageddon saw white solidarity literally blown from the muzzles of the guns. An explosion of internecine hatred burst forth more intense and general than any ever known before… Before Armageddon there thus existed a genuine moral repugnance against settling domestic differences by calling in the alien without the gates. The Great War, however, sent all such scruples promptly into the discard." (p.208)

World War II, which Stoddard foresaw, was just the apotheosis of this process, complete with one state mythology that defined Jews, Russians and Poles as outside the pale of white civilization and another that denied the value of race altogether in favor of an economic mythology.

Finally, I would like to quote a succinct passage that can only trigger a shock of recognition:

"Our present condition is the result of following the leadership of idealists and philanthropic doctrinaires, aided and abetted by the perfectly understandable demand of our captains of industry for cheap labor." (p. xxxi) [not online]

How little has changed in 83 years!

I have the curious sense that since the melting of the geopolitical ice of the Cold War, which froze human relations into an artificial pattern for 44 years, history has not only not stopped but is in some ways going backwards—and that all these issues from earlier times are once again becoming live.

We have much to learn by revisiting the racial thinkers of the past—even if we do not always agree with them.

Robert Locke (email him) is a former associate editor at FrontPageMagazine.com (archive here).