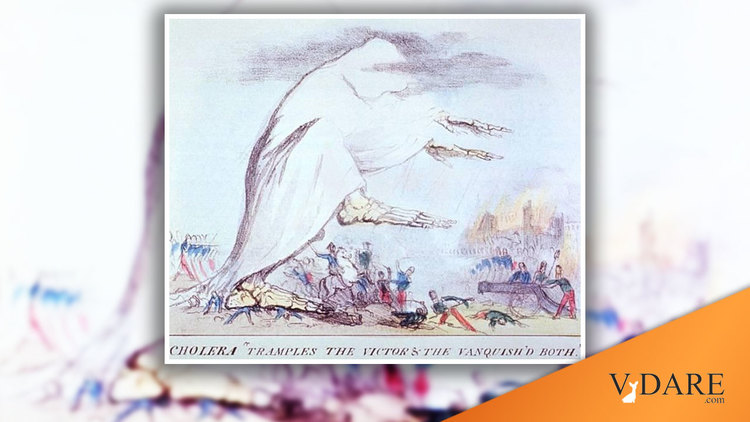 Sailer In TakiMag: The Miasma Theory Of White Racism

The Miasma Theory of White Racism

Scientific-minded dissidents frequently compare today’s orthodoxy that the cause of whatever ails blacks is—and, indeed, must be—white racism to discarded scientific constructs such as phlogiston in chemistry and aether in physics. But the most informative comparison might be to the long, unfortunate hold of the miasma theory of disease on medical thought.

In 2021, the conventional wisdom is that while you almost never see white racism, it’s always out there somewhere, everywhere, ruining the lives of blacks, lowering their test scores and raising their murder rates. It’s as if white people implicitly exude a poison from their pores that harms only blacks, due to their being genetically different, although, as everyone also knows, genetic differences, like race, don’t exist. C’mon, man, follow the science!

Similarly, the history of miasma theory shows how resistant poor explanations can be to correction. The notion that malaria (Italian for “bad air”) and other diseases now known to be contagious were caused by poisonous emanations (or miasma—ancient Greek for “pollution”) was common (although not universal) from classical times until the later 19th century.

There's a great comparison to be made between Current Year understanding and the history of scurvy, which they'd more or less figured out around 1750, but then bad theories undid everything to the point that people were still dying of expeditions well into the 20th century