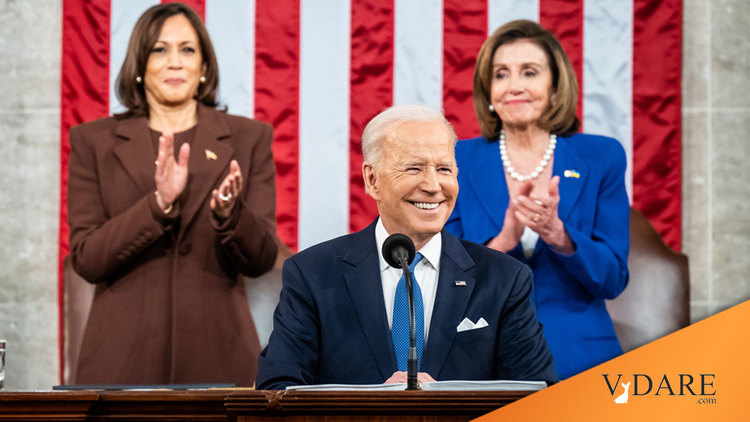 President Joe Biden squeezed a few words about the southern border and immigration into his State of the Union address on Tuesday. The Regime Media largely ignored it, but we at VDARE won’t. And we won’t ignore the lies he told about his firm commitment to border security, which he has worked tirelessly to undermine, or what he claims will fix the problem and help America: Amnesty. Biden knows Americans are unhappy with Open Borders, but he doesn’t intend to change. Dispossessing the Historic American Nation with mass immigration is just too important to the Democrats to give up.

Of course, Biden claimed he is improving border security:

We’re putting in place dedicated immigration judges in significant larger number so families fleeing persecution and violence can have their cases heard faster and those who don’t legitimately here [sic—apparently he ad-libbed this] can be sent back.

We’re screening, we’re securing commitments and supporting partners in South and Central America to host more refugees and secure their own borders.

And he’s doing all this “while keeping lit the torch of liberty that has led the generation of immigrants to this land—my forebears and many of yours.”

It wouldn’t be a truly Leftist speech unless he included the usual falsehood that America is a “nation of immigrants.”

Biden’s pitch that he is securing the border is a bald lie. He’s deliberately done the exact opposite. Some three million illegals crossed the border in 2021, some observers estimate, a massive increase from the Trump years. Border agents detained only two million or so. The rest got away. This year’s figures will likely be the same…or worse. Agents detained more than 153,000 illegals in January. That was almost double that of the previous January.

And while Biden claims that “cutting-edge scanners” and joint patrols with Mexico show his commitment to border security, everything else he does shows that too is a lie. His Cuban-Jewish Homeland Security chief, Alejandro Mayorkas, has repeatedly said illegals need not fear deportation unless they commit a very serious crime. Many detained at the border are released to disappear into the American heartland. And we pay for their travel and accommodations! In other words, Biden and Mayorkas are breaking the law, which requires illegals to be detained…and bragging about it.

As for the immigration courts, tens of thousands of illegals don’t receive court dates when apprehended. They’re just told to show up to an Immigration and Customs Enforcement office and get one. Not surprisingly, many don’t. We already know 50,000 illegals haven’t bothered to report to ICE, which cannot find them [DHS begins tracking migrants through phones after losing track of 50,000, by Anna Giaritelli, Washington Examiner, January 25, 2022]. Welcome back, catch and release.

Biden also crippled ICE. Deportations are down 70 percent from Trump’s last year in office [ICE Deportations Down 70 Percent in 2021 Under Biden, by Joseph Simonson, Washington Free Beacon, February 9, 2022]. Experts complain that Biden has abolished ICE in all but name, and the few restrictions he will enforce he does so only reluctantly. Example: Remain in Mexico. This policy, which Biden revoked but a federal court reinstated, keeps dubious asylum seekers out of America while they wait for their application to be processed. Though Biden is required to enforce it, fewer than 300 migrants are in the program [Fewer Than 300 Asylum Seekers Enrolled in ‘Remain in Mexico’ After Biden Gutted Policy, by Joseph Simonson, Washington Free Beacon, January 27, 2022].

All this has undermined morale in the Border Patrol. Frustrated agents lashed out at Mayorkas last month when he visited the border. They said Biden’s policies prevent them from doing their job. Mayorkas’ answer? “I know the policies of this administration are not particularly popular with U.S. Customs and Border Protection, but that's the reality and let's see what we can do within that framework” [DHS Secretary Had a Disastrous Meeting with Border Patrol Agents, by Julio Rosas, Townhall, January 26, 2022].

One agent told Mayorkas the border was better under the Trump admin. Sources who were at the meeting tell me Mayorkas was visibly upset.

Border Patrol agents are pissed and they let Mayorkas know about it today.https://t.co/hAdryUWeke

Americans are unhappy about the illegal-alien invasion. Surveys consistently show the president foundering on the issue. Biden’s own pollster has released a survey that shows just how bad things are for him: 66 percent of voters disapprove of Biden immigration policies [Biden’s handling of immigration gets low marks in his own pollster’s survey, by Natasha Korecki, NBC News, February 27, 2022]. But rather than change the policy, the president is changing his rhetoric to deceive the public.

The lies aside, at least he was honest about his plan for the future: Amnesty. (Sort of. He called it “a pathway to citizenship.”) Again, the Regime Media was silent about his intentions:

Provid[ing] a pathway to citizenship for DREAMers, those on temporary status, farm workers, essential workers.

Revis[ing] our laws so businesses have workers they need and families don’t wait decades to reunite.

That’s why immigration reform is supported by everyone from labor unions to religious leaders to the U.S. Chamber of Commerce.

Of course, the labor unions, religious leaders, and Big Business support it Amnesty. But it’s not the “right thing” or “economically smart thing to do.” Remember, the Amnesty proposals that the Senate parliamentarian kept out of the Build Back Better budget bill would have cost $483 billion through 20 years [20-Year Cost of 'Build Back Better' Amnesty: $483 billion, by Steven Camarota, Center for Immigration Studies, December 6, 2021].

Biden clearly signaled that he wants Amnesty pushed through. Despite the parliamentarian’s ruling that it was not germane to the bill, Democrats still might overrule the decision. Leftists have demanded it. Biden might just encourage this strategy.

Biden knows immigration hurts him. He knows open borders and border invasion could be midterm election killers. And he knows he can’t pass Amnesty. Still, he has kept his campaign promises, such as ending deportations and trying to legalize illegal aliens. He undoubtedly believes that promise to Hispanics is crucial for the Democrats in November.

The calculation is that one election can’t harm the Democrats all that much. But Open Borders and Amnesty are part of the Democrats’ long-term strategy to dispossess and replace the Historic American Nation and establish a permanent governing majority by Electing A New People.

That’s why no poll can dissuade Biden from the path he has chosen—and why the Regime Media is downplaying it.

But what is the GOP’s excuse?