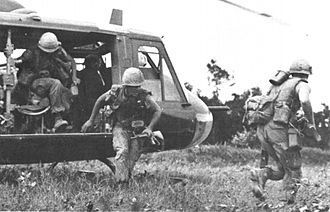 The Virtual Fence And The Air Assault

The Obama administration is reviving the idea of a "virtual fence," an idea put forward during the Bush Administration as a substitute for a real fence.

"Virtual Fence" is another name for Burglar Alarm. The idea is that the camera shows the intruder, where they're coming in, where they're heading, and if they're carrying rifles.

But once the alarm is given, the government has to do something, and that's what has made us all skeptics. The Bush Administration, after years of scandalously bad border security, sent unarmed national guardsmen to the border, and agents Ramos and Compean to prison.

It's easy to visualize the appropriate force to respond to incursions detected by the sensors. A US Army helicopter force carrying a mix of infantry and MPs, the infantry to make sure the illegals surrender, and MPs to accept the surrender, search the prisoners, and prepare them for their return to Mexico.

The infantrymen would have rifles (loaded) with bayonets (sharpened). The MPs would carry nightsticks (large) and pistols (loaded).  See FM 3-19.4, Military Police Leaders Handbook for details.

It's easy to visualize such a force, since America  fought much of the Vietnam War on this basis, and it's possible that such forces are guarding borders in Iraq at this moment.

It's not easy to visualize Commander In Chief Barack Obama sending such a force to the border to protect the United States from invasion. After all, George Bush didn't, and he wasn't considered shy about the use of military force.

And that's why we need the real fence. It works, even when there's no one to answer the alarm.