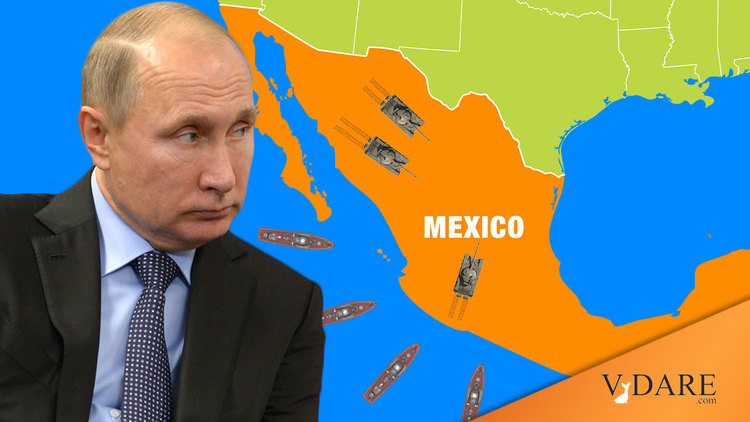 Ann Coulter: My Position On Russia—Millions Of Illegals Are Pouring Across Our Border And Must Be Stopped!

As World War III looms in Europe, we must put narrow partisan differences aside and tap the brain power of the greatest minds among us. It is time for the Biden White House to call upon…Jared!

Speaking of the best and the brightest, our foreign policy mandarins must have felt like it was Christmas Day when a senile dementia patient became president. Finally! No meddling politicians to get in the way of our beautifully designed plans worked out at the Council on Foreign Relations. Although Joseph R. Biden is technically, in a strictly legal sense, “president,” it’s progressives running his domestic policy, and think-tank geniuses running his foreign policy.

Let’s review the consistent position on Russia from our ruling class, informed by the whiz kids of international affairs.

Throughout President Obama’s “reset” of the relationship with Russia—which had “deteriorated alarmingly” under President Bush, according to the New York Times—foreign policy experts were thrilled to have an American leader finally acknowledging the end of the Cold War.

A Times article cheerfully reported that “Mr. Obama has resolved not to let the ghosts of the 20th century get in the way of his goals in the 21st.” The paper editorialized, “We are relieved that Washington and Moscow are talking about cooperation.”

Evincing our shared humanity, the Russkies loved Obama. “After relations with the United States curdled in the final years of President George W. Bush’s tenure,” the Times cooed, “many people [in Russia] were relieved by Mr. Obama’s election.” Indeed, “Russia’s leaders … could not say enough good things about President Obama.” Sting was right: The Russians DO love their children, too!

When Mitt Romney came along and described Russia as our “No. 1 geopolitical foe” in 2012, the world laughed itself silly.

Ridiculing Romney in an editorial titled “The Never-Ending Cold War,” the Times said his remark revealed “either a shocking lack of knowledge about international affairs or just craven politics.”

The BBC cited “experts” who said Romney’s statements on Russia reflected “his lack of experience in foreign policy.”

In a debate, Obama responded to Romney, “The 1980s are now calling to ask for their foreign policy back.” To hoots of laughter at the Democratic National Convention, he accused Romney of being “stuck in a Cold War mind warp.” Then-Sen. John Kerry joked, “Folks, Sarah Palin said she could see Russia from Alaska. Mitt Romney talks like he’s only seen Russia by watching ‘Rocky IV.'”

Trump ran on having better relations with Russia, and he questioned the wisdom of letting every country in Europe into NATO—whereupon Russia became the most psychotically evil country in the world.

Nearly all the other Republican candidates jumped on Trump, sneering, “that’s not how the real world works” (Jeb!), calling Putin a “gangster” (Sen. Marco Rubio) and vowing to “start rebuilding the Sixth Fleet right under [Putin’s] nose, rebuilding the … missile defense program in Poland right under his nose … conduct very aggressive military exercises in the Baltic states … and I might also put in a few more thousand troops into Germany” (Carly Fiorina).

Clearly, Republican primary voters thus had a choice of two very divergent views of Russia. They picked the guy who wanted to have a better relationship with Russia.

Then Trump beat Hillary, and Democrats announced that he’d stolen the election by colluding with Russia, the most evil country on Earth. (This was absolutely NOT an insane conspiracy theory supported by zero evidence.)

To our great misfortune, instead of doing what he’d run on, Trump decided the sole focus of his administration would be proving that he was not too friendly to Russia! Voters never got the thawed relationship with Russia they’d voted for. (Or the wall, now that I think about it.)

You know who else didn’t want to sell lethal weapons to Ukraine? Obama. German Chancellor Angela Merkel. Leslie Gelb, president emeritus of the Council on Foreign Relations. Professor Graham Allison of Harvard, national defense expert. As Matthew Rojansky, director of the Kennan Institute, explained to the New York Times in 2015, sending lethal weapons to Ukraine would make the U.S. “a belligerent party in a proxy war with Russia, the only country on Earth that can destroy the United States. That’s why this is a big deal.” This was “the view of many experts,” the Times added.

You’ll never guess what happened next. Before the end of his first year in office, Trump approved the sale of…lethal weapons to Ukraine! Conservatives were thrilled! See? Trump isn’t controlled by Putin! What do you say now, Resistance? (They said: Trump still stole the election by colluding with Russia.)

The Cold War is back! You might say liberals are “stuck in a Cold War mind warp.” They talk like they’ve “only seen Russia by watching ‘Rocky IV.'”

Joy-Ann Reid, February 27, 2022: “Republicans … who came into the party through Reagan … which was highly adversarial toward the Soviet Union, why do they love Russia so much, … why do they love the Kremlin and Putin so much?”

Hey, Joy-Ann! The 1980s are now calling to ask for their foreign policy back!

Unlike the experts and journalists whose deep study has led them to a sophisticated take on Russia (that flips back and forth with the politics of the moment), my position on Russia has been as unchanged as the Rock of Gibraltar, at least since the end of the Cold War. Coincidentally, it is exactly the same as my position on Taiwan, Haiti, Uganda and North Korea.

It is this: Tens of millions of illegals are pouring across our border and must be stopped.