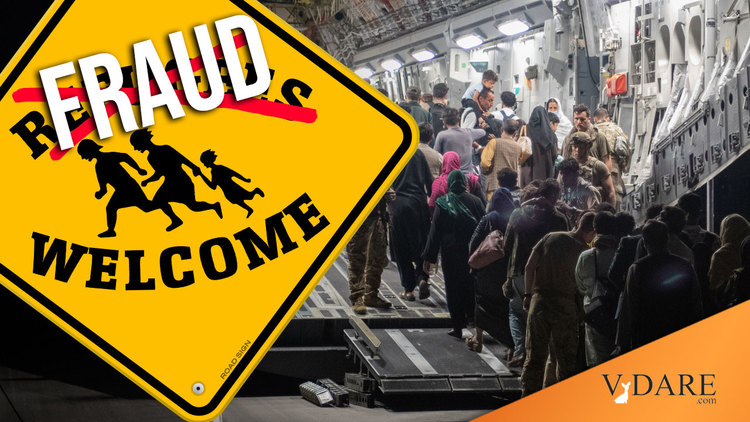 A major fraud ring has been exposed in the refugee racket, but it is a drop in the bucket of all the refugee fraud being perpetrated by the Biden Regime at the border and inside the Department of Homeland Security (DHS). But it does expose inherent problems with refugee admissions programs and the employees used to administer those programs.

It might shock most readers, but for a large part, the refugee admissions program that funnels dangerous and welfare dependent aliens into the United States is not directly administered by Americans employed by the United States government.

Almost all refugees are referred to the United States refugee program by aliens employed by the United Nations High Commissioner for Refugees (UNHCR) and assorted globalist Non-Governmental Organizations (NGO) that are contractors to the UNHCR or affiliated with it and working in conjunction with the UNHCR. These NGOs run the gamut from organizations like International Organization for Migration (IOM) to alien smuggling organizations disguised as rescue boats.

Even in the United States government components responsible for adjudicating refugee applications, thousands of aliens are employed, mostly overseas, to “assist” with the process. For every one Department of State (DOS) bureaucrat or U.S. Citizenship and Immigration Services (USCIS) Refugee Officer (RO) assigned overseas, there are myriads of interpreters, assistants, paper shufflers, and assorted hangers-on involved in the work.

Obviously, employing what the DOS calls Foreign Service Nationals (FSN) or Locally Employed Staff (LES) may be necessary or practical in some situations; embassy cooks, gardeners, or drivers are quite innocuous and of little intelligence or fraud threat, but giving aliens, not even Lawful Permanent Residents (Green Card holders), access to important databases, forms, and, more importantly, access to the diplomats and officers reviewing records, conducting interviews, and making decisions, is an invitation to fraud or corruption.

A short story before I continue. A former colleague was employed by the State Department  in our embassy in Iraq. He had the misfortune to be assigned to embassy security relating to visa fraud. He confirmed to me that both Shi’ite and Sunni sides of the then ongoing Iraqi civil war were gaming the system, with the full consent of DOS and USCIS, in an effort to place operatives in the United States for both operational and support purposes, mostly fund-raising, using the refugee program.

He even had a major terrorist suspect, employed by DOS in their refugee processing program, who was untouchable. Basically, in Iraq the United States was giving refugee status to both Al Qaeda operatives, because they were being killed by a Shi’ite government, and to Shi’ites, because they were victims of Sunni terrorism that the Shi’ite-dominated Iraqi government could not or would not control. And yes, if an alien is the victim of terrorism overseas, and the local government cannot defeat that terrorism, even if that government wants to, that is a basis for getting refugee status in America or having deportation charges dismissed.

As another example, once while employed by the legacy Immigration and Naturalization Service (INS), I encountered a Filipino citizen with a green card returning from the Philippines. She had an unusual immigration designation, not the usual alpha-numeric designation on the green card for the usual Filipino immigrants—spouse, child, or parent of a U.S. citizen, spouse, child, or parent of another green card holder, etc.

Yes, that is how bad the refugee and asylum policies are. I was a new employee then and quite shocked that the United States was, and is, rewarding all parties in a civil war or terrorist campaign with refugee or asylum status for no apparent reason.

But back to the most current refugee fraud system, and yes, it is a system, as well as a fraud scheme, because not only are employees of the United States corruptly participating in the schemes, but also, at all levels, the government is complicit in the fraud. Whether it is Deep State ideologically motivated operatives or the fraudulently elected Biden Regime electing a new people, they are complicit.

In the most current case, a conspiracy of three aliens, one a DOS Foreign Service National and one a USCIS local employee, with the leader being a denied refugee, which is amazing in itself. Aws Abduljabbar must have been an obvious fraud if he lost out on the 99% approval rate of refugee applications.

An Iraqi national, Aws Muwafaq Abduljabbar, pleaded guilty today to one count of conspiracy to defraud the United States related to his role in a scheme to defraud U.S. refugee programs…

Abduljabbar is one of three defendants charged in an indictment that was unsealed on January 22, 2021. The indictment charges Abduljabbar and two other foreign nationals, Haitham Isa Saado Sad, 43, and Olesya Leonidovna Krasilova, 44, in connection with a scheme to defraud the U.S. Refugee Admissions Program (USRAP) and, in particular, the Iraq P-2 program, which allows certain Iraqis to apply directly for refugee resettlement in the United States. Sad previously pleaded guilty and remains held pending sentencing. Krasilova remains at large.

We can, of course, thank the morons in Congress for actually creating and giving Afghans and Iraqis access to the refugee program. Generally, none would be considered true refugees and therefore summarily rejected, but at the instance of Congress mere association with the United States, the international press, or an NGO suddenly turns Afghans and Iraqis into refugees. We have even outsourced to the Leftist nation-busting Lying Press and NGOs the authority to “refer” an applicant for refugee status. And by “refer,” they mean this application will be approved or the press will publicize the case.

Individuals Eligible for the P-2 Program:

Afghans who do not meet the minimum time-in-service for a SIV but who work or worked as employees of contractors, [1] locally-employed staff, interpreters/translators for the U.S. Government, United States Forces Afghanistan (USFOR-A), International Security Assistance Force (ISAF), or Resolute Support;

Afghans and their eligible family members (spouse and children of any age, whether married or unmarried) can be referred to the P-2 program by a U.S. government agency. For non-governmental organizations (NGO) and media organizations that were not funded by the U.S. government, but are headquartered in the United States, the senior-most U.S. citizen employee of that organization may make a referral.

There was a similar designation for Iraqi nationals which resulted in massive fraud under the Obama Regime, which President Trump thankfully reduced by over 100,000 admissions annually.

Fortunately, the Iraqi P-2 program has been suspended, but only temporarily. The Biden Regime will eventually reopen this program. We just don’t have enough Iraqi and Afghan child molesters for Joe Biden’s taste. This fraud problem is similar to the Somali P-3 program, which was suspended because of fraud some years ago. The P-3 program is for aliens who do not qualify for refugee status, but have family in the United States. Somalis abused the program with fraudulent applications from persons not actually related to refugees already admitted to the United States. But all that was for naught as all those denied P-2 or P-3 need only run to our border with Mexico and get a free airplane ticket to their destination in the United States.

Note that P-2 and P-3 were created because those beneficiaries do not meet the statutory definition of a refugee, i.e., an alien, outside the United States, that demonstrates by clear and convincing evidence that they were persecuted or fear persecution by the government of their citizenship or nationality, or the government of their last nation of residence, due to race, religion, nationality, political opinion, or membership in a particular social group. Note there is no mention of employment, much less employment merely by an NGO or the Lying Press, in the definition of a refugee.

The fraud scheme, which involved thousands of applications, including those already admitted to the United States, was only possible because, to save pennies by paying a foreigner to do work American citizens should do, the DOS and USCIS gave access to sensitive computer databases to corrupt foreigners outside the United States.

According to the indictment and statement of facts agreed to by Abduljabbar as part of his guilty plea, from approximately February 2016 until at least April 2019, the three defendants, led by Abduljabbar, conspired to steal U.S. government records related to hundreds of USRAP applications. Sad was employed in Amman, Jordan from 2007 to 2016 by U.S. Citizenship and Immigration Services, and Krasilova held a similar position at the U.S. Embassy in Moscow, Russia. As part of their duties, both defendants had access to the State Department’s Worldwide Refugee Admissions Processing System (WRAPS), a database containing sensitive, non-public information about refugee applicants and their family members, as well as the results of security checks and internal assessments by U.S. officials regarding applications.

Who thought giving a Russian and an Iraqi access to sensitive databases was a good idea? Well, the same people who want to flood the nation with immigration fraudsters, child molesters, and welfare cheats. This will not be the end of refugee fraud. The open borders left is already complaining that there is not enough Afghan refugee fraud.