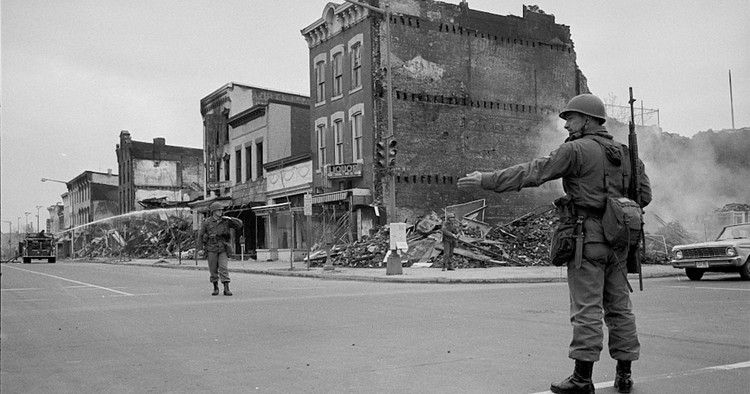 Sunday morning, President Trump announced that the world's worst terrorist, the head of the ISIS caliphate who had raped an American woman, had received justice.

About to be captured and carried off in a helicopter by U.S. special forces, Abu Bakr al-Baghdadi blew himself up with an explosive vest in a compound in northwest Syria. The long search for the sadist and fanatic had ended in triumph. No U.S. troops were lost.

That evening, Trump went out to the fifth game of the World Series between the Washington Nationals and Houston Astros. As his face was flashed on the big screen, the stadium erupted with people booing and chanting, "Impeach Trump!" and "Lock him up!"

That Trump is not cheered at a D.C. baseball game is not odd, for the spectators are not working-class Trumpians. Series tickets cost hundreds, even thousands, of dollars, and the spectators are drawn from a town that gave Donald Trump 4% of its votes in 2016.

The mutual distrust in this city was on display when Trump told the press yesterday morning that he had not alerted House Speaker Nancy Pelosi to the impending U.S. raid, because he was afraid of leaks.

"I wanted to make sure this kept secret," said Trump. "I don't want to have people lost. ... We were going to notify them last night, but we decided not to do that because Washington leaks like nothing I've ever seen before. ... A leak could have cost the death of all of them."

The Russians, however, were alerted we were coming, as they control the airspace over the compound we were targeting. And Trump thanked the Russians for their cooperation.

Also left out of the loop was the chairman of the House Intelligence Committee, Adam Schiff, one of the "Gang of Eight" that is almost always given a heads-up about major military operations. Schiff is conducting secret hearings to drum up support for Trump's impeachment and removal for "high crimes and misdemeanors."

It is imprecise to say this city is divided over Trump. It is rather almost solidly united behind what millions of Middle Americans believe to be a Deep State-media conspiracy to overturn the 2016 election and effect a coup d'etat against a president whom this city detests but fears it cannot defeat in 2020.

It is imprecise to say this city is divided over Trump. It is solidly united behind what one-third of America sees as a media conspiracy to and effect a it detests but fears it cannot defeat in 2020.

A week ago, this writer noted the astonishing number of foreign capitals that were on fire with protests that go beyond marching and demonstrating—to riot, rebellion and even revolution. As with the "yellow vest" protests that shut down Paris on many weekends this past year, and the disorders in Hong Kong, the epidemic had spread to Beirut, Barcelona and Santiago, Chile.

In Iraq, over 200 have been killed and thousands injured in protests this month against the Baghdad regime. In Algeria, now six months after President Abdelaziz Bouteflika was forced to step down, rioters still battle the army.

The thread common to these uncivil, often-violent disruptions?

A conviction that the cause the protesters are advancing is so critical, noble and necessary that democratic rules may be dispensed with and law and order suspended in pursuit of the cause.

Saturday's Washington Post describes the mindset that is taking hold in D.C. among militants, using as an example the Extinction Rebellion group's dragging of a boat into the street at 16th & K to block traffic for hours to call attention to rising sea levels.

"Blocking traffic may only be the beginning," wrote Marissa Lang. "As protests in the District continue at a rate of about two a day, activists looking to stand out from crowds that march near the White House or the Mall have resorted to more disruptive measures in recent weeks—a tactic that experts said will probably escalate." [After rush-hour traffic disruptions, D.C. protesters look to escalate tactics, October 24, 2019]

She cites sociology professor Dana Fisher [Email her]: "There has been a lot of discussion among people on the left who use protests as a tactic that peaceful, traditional protests may not be enough. ... That could mean ... more people blocking traffic. ... I think we're going to see a lot more people coming into D.C. to get arrested."

Fisher continues: "When activists don't feel like their grievances are being heard or responded to ... the natural progression is to get more confrontational and, sometimes, to get more violent. ... I'm ... surprised it's taken so long."

Who wins when leftists go lawless—in liberal citadels like D.C.?

This thinking echoes the famous "bodies upon the gears" speech of Mario Savio at the famous 1964 University of California, Berkeley campus riot: "There's a time when the operation of the machine becomes so odious, makes you so sick at heart, that ... you've got to put your bodies upon the gears and upon the wheels, upon the levers, upon all the apparatus, and you've got to make it stop!"

After Berkeley came civil disobedience; the burning of ROTC buildings; and urban riots marked by looting, shooting and arson. Out of that came Richard Nixon's 49-state landslide, Ronald Reagan, and Republican triumphs in five of six presidential elections starting in 1968.