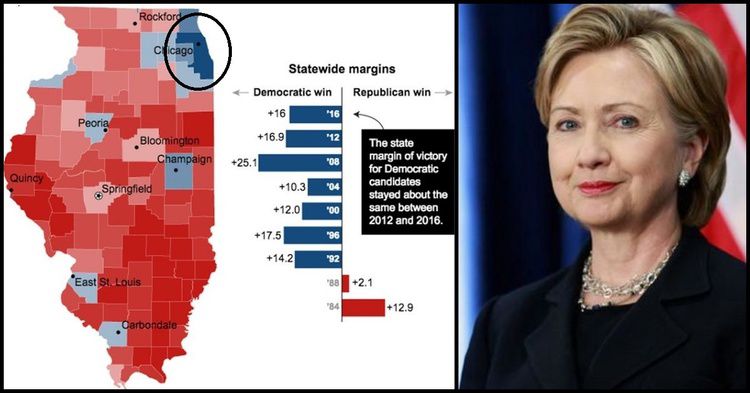 If you want to know how divided the country is becoming thanks to immigration-driven demographic polarization, Black Lives Matter type-bullying, and the never-ending demonization of whites by SJWs and their torpedoes in the MSM, consider this: Polling data show that more and more Americans across all categories—most notably, age and race—think secession (subdividing towns, cities, even states—all the way up to outright leaving the American Union) is a good idea. This is great news for American whites, i.e. the group that used to be known as “Americans” until the disastrous 1965 Immigration Act. It offers them a way to protect their interests and their communities. Hence last year’s try in California, and the long-running effort in Illinois. You read that right: Illinois—Barack Obama’s launching pad.

Republicans there want to split the Land of Lincoln like one of Honest Abe’s fabled logs. Well, almost. In 2018, HR 1138 proposed Chicago as the 51st state, while 2011’s HJR 0052 would have split off Cook County (which includes Chicago and other townships and comprises 40% of Illinois population). Both efforts failed, but two grassroots organizations are keeping hope and change alive. [Meet the people working to kick Chicago out of Illinois, by Cindy Dampier, Chicago Tribune, August 1, 2019]

New Illinois and The Illinois Separation formed in 2018 and are both fighting to jettison Cook County. Both organizations are gathering signatures from sympathizers across the state. [Will this Southern Illinois county join a new 51st state? Voters will get their say, by Kavahn Mansouri, Belleville News-Democrat, October 2, 2019]

The Illinois Separation boasts a vigorous 25,000 Facebook followers. It hosts regular events and hopes to put the separation question on the 2020 ballot. Its website details the process and how many signatures it needs in each county to make the ballot: eight percent of 2018’s gubernatorial vote by May. Meanwhile, New Illinois, 12,000 strong on Facebook, “believes the situation in our state is beyond reformation. We believe that the only way the citizens can escape from this corruption, obtain truly representative government, and achieve financial recovery is through a state split.” [The History of New Illinois, NewIllinoisState.org]

Success will also require a Federal constitutional convention, something 28 states have called for; only 34 are needed under Article V of the Constitution. [U.S. Constitution Threatened as Article V Convention Movement Nears Success, by Jay Riestenberg, Common Cause, March 21, 2018]

Ultimately, however, separationists will need the federal government to act, just as it did with the when Maine left Massachusetts in 1820 and West Virginia divorced Virginia in 1863.

Even an MSM scribe agrees. Chicago Tribune columnist John Kass, who calls Illinois the “Venezuela of the Midwest,” proposes dissolving the state completely. Cook County would stand on its own as unrecognized federal territory. The surrounding states be made more red by giving them slices of Illinois: Wisconsin and Iowa, now swing states, would receive suburban Illinois territories, while solid red Indiana, Kentucky and Missouri would absorb rural areas. (See map below). One issue to resolve: $251 billion of unfunded public-sector union pensions as of 2017. [What to do with a broken Illinois: Dissolve the Land of Lincoln, June 20, 2017] 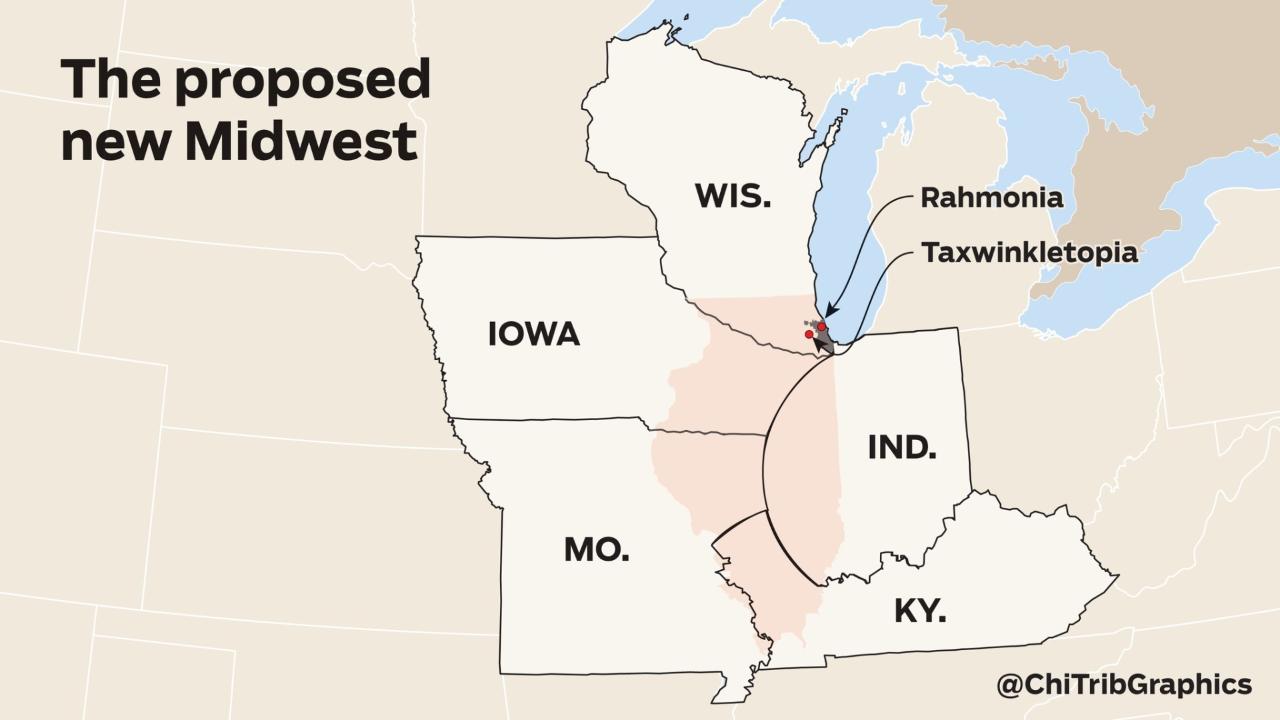 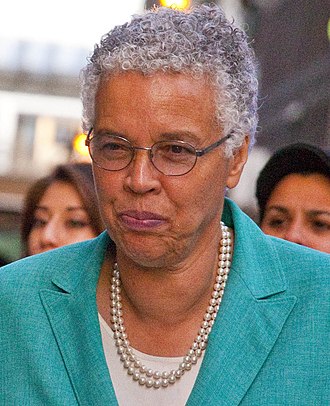 Above, Rahmonia and Taxwinkletopia refer to Chicago and Cook County, after 2017 Mayor Rahm Emanuel and Cook County Board President Toni Preckwinkle, right.

Reasons abound for separating from Chicago, a city with 573 homicides last year and 357 so far this year. [Tracking Chicago’s Homicides, Chicago Tribune, September 9, 2019]

Demographically, the move makes perfect sense. The needs of an urban, nonwhite majority are not the same as those of a rural or suburban white majority.

That’s where immigration, the National Question, and the Historic American Nation come into play. Hispanics are now the largest minority in Chicago, nearly one-third of the population. [Mexicans and ‘Hispanics,’ now the largest minority in Chicago, by Jacqueline Serrato, Chicago Tribune, October 13, 2017] With unchecked illegal immigration, high legal immigration, and foreign workers overstaying their visas, this problem will worsen. That means the chasm between Cook County’s growing Hispanic population and the city’s native whites and blacks, as well as the divide between Cook County and the rest of the state, will deepen.

Without bringing up demographics, New Illinois chairman GH Merritt explained separation from Cook County for a reporter at The Southern Illinoisan: “They can do best for theirs, and we'll do best for the rest.” [Group seeking to divorce rest of state from Cook County plans meeting in Mount Vernon, by Molly Parker, July 12, 2019]

As for demographics generally and what they mean in elections, the July 2018 census estimated a population of 12.7 million, 7.5 million of whom would live in “New Illinois,” with 5.2 million left for the new state of Chicago.

Illinois is one of the safest Democrat states in presidential elections. Hillary Clinton crushed Donald Trump in 2016, 55.4 percent to 39.4. But Clinton’s margin of victory came from Cook County, where she beat Trump by nearly 1.1 million votes. [2016 Illinois Presidential Election Results, Politico, December 12, 2016] There, Clinton shellacked Trump by more than 50 points, 74.4-21.4.

Consider what those figures would mean for Trump if Illinois had split before the 2020 presidential election.

General consensus is, a Trump win next year requires one of these three states that he won in 2016 by using the Sailer Strategy and mobilizing working class whites: Michigan, Wisconsin, or Pennsylvania.

If Trump holds Nebraska’s and Maine’s second congressional districts, he has 260 electoral votes. Now, add “New Illinois” to the mix. Trump would need only one of the big four—”New Illinois,” Michigan, Wisconsin, or Pennsylvania—for an easy victory and re-election. In 2016, his margin of victory in an Illinois sans Cook County would have been far better than it was in any of the three “Blue Wall” states he flipped.

In other words, “New Illinois” becomes a key player in presidential elections.

As for the practical benefits of separation, residents of both states would have far more control of their municipalities than they do now.

Cook County’s congressional delegation and two senators would remain all Democrat. That supermajority would allow the State of Chicago to do whatever it wishes without imposing its will on the whites who live in the rest of Illinois now. Locally, the state’s legislature could also do what it wants. If Chicagoans want to be weak on crime, create more Affirmative Action policies, let illegal aliens vote, or adopt other stupid policy ideas, they would be free to do so.

Likewise, “New Illinois” would likely elect a Republican governor and enjoy a Republican-controlled legislature that would do the opposite of liberal Chicago: get tough on crime and liberalize gun laws, to cite just two examples. It would never become a sanctuary state and could implement E-Verify.

Meanwhile, majority white “New Illinois” would have a louder conservative voice in House because voters would generally favor Republicans. After all, Republicans do reasonably well now in congressional races across Illinois outside of Cook County, which sends eight Democrats to Capitol Hill. Of the state’s remaining 10 seats, Republicans hold five. Two of the five Democrats represent R+ districts 6 and 14 that went blue in the 2018 midterms. Republicans could win those back.

And without Chicago and Cook County determining the outcome of every statewide election, “New Illinois” would likely send two GOP immigration patriots to the Senate. [PVI Map and District List, The Cook Political Report, Page 8]

In other words, as the National Question goes, separation would be a victory for immigration restriction.

But a final cautionary note for Illinoisans comes from California. Winning at the ballot box won’t be enough. The Kritarchy awaits. The initiative that would split California into three states made the November ballot in 2018, but the state’s high court removed it on a technicality. [Measure to split California into three states removed from ballot by the state Supreme Court, by Maura Dolan, Los Angeles Times, July 2018]

Then again, Cal-3’s pulling enough support to get on the ballot shows just how powerful secessionist movements are.

Separating Cook County from the rest of Illinois is a long shot. But as VDARE.com’s Peter Brimelow says, miracles happen quite often in politics. Separation—if not outright secession from the Union—is a path forward for whites. A win there would send the message that the Historic American Nation can survive.