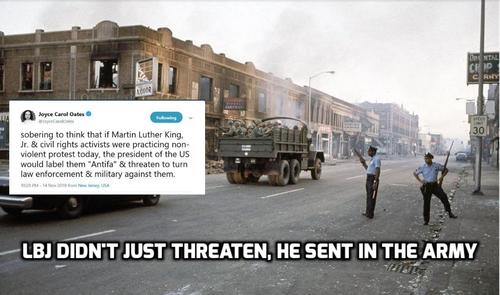 MLK, Antifa, And The City Burning Riots Of The '60s

This is a fascinating Tweet from Joyce Carol Oates, who really is old enough to know better, especially since she was in  Detroit in the '60s during the riots:

sobering to think that if Martin Luther King, Jr. & civil rights activists were practicing non-violent protest today, the president of the US would label them "Antifa" & threaten to turn law enforcement & military against them. 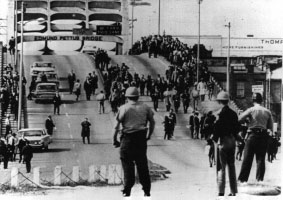 MLK's nonviolent tactics of civil disobedience were based on Gandhi's—he and his followers would do something illegal, provocative, and not overtly violent, and then blame the authorities for the reaction.

Selma Bridge was the classic example. As I wrote a while back, when protesters were streaming (illegally) across the Edmund Pettus Bridge to face badly outnumbered state troopers, they were backed by the President of the United States (Lyndon Johnson) and led by a Nobel Peace Prize winner.

But in 1967, while MLK was at the height of his Gandhian pacifist organizing fervor, the US experienced the Long Hot Summer of 1967, when whole cities were under siege by black rioters, who were looting, burning, and of course, being arrested or shot by both the police, and the US military. Wikipedia says of that summer, slightly edited for readability

Long, hot summer of 1967 refers to the 159 race riots that erupted across the United States in 1967. In June there were riots in Atlanta, Boston, and Cincinnati, as well as the Buffalo riot (in Buffalo, New York), and a riot in Tampa, Florida. In July there were riots in Birmingham, Chicago, New York, Milwaukee, Minneapolis, New Britain, Conn., Rochester, N.Y., and a riot in Plainfield, New Jersey. The most serious riots of the summer took place in July, with the riot in Newark, New Jersey and the Twelfth Street riot, in Detroit, Michigan. As a result of the rioting in the Summer of 1967, and the preceding two years, President Johnson established the Kerner Commission to investigate the rioting.

That's 159 riots, of which these are some of the largest:

Now, antifa aren't non-violent, and never have been. They don't even try to fake pacifism, but they're not doing anything like this.