Pat Buchanan: The Passing of the Pelosi Era

In the first round of the special election for the House seat in Georgia's Sixth District, 30-year-old Jon Ossoff swept 48 percent. He more than doubled the vote of his closest GOP rival, Karen Handel.

A Peach State pickup for the Democrats and a huge humiliation for President Trump seemed at hand.

But in Tuesday's final round, Ossoff, after the most costly House race in history, got 48 percent again, and lost. If Democratic donors are grabbing pitchforks, who can blame them?

And what was Karen Handel's cutting issue?

Ossoff lived two miles outside the district and represented the values of the Democratic minority leader, whom he would vote to make the speaker of the house, Nancy Pelosi of San Francisco.

The Pelosi factor has been a drag on Democrats in all four of the special elections the party has lost since Trump's November triumph.

Prediction: Democrats will not go into the 2018 Congressional elections with San Fran Nan as the party's face and future. No way. As President Kennedy said, "Sometimes party loyalty asks too much."

Post-Trump, it is hard to see Republicans returning to NAFTA-GATT free-trade globalism, open borders, mass immigration or Bushite crusades for democracy. A cold realism about America's limited power and potential to change the world has settled in.

And just as Trump put Bush-Romney Republicanism into the dumpster in the 2016 primaries, Hillary Clinton's defeat, followed by losses in four straight special elections, portend a passing of the guard in the Democratic Party.

So where is the party going?

Clearly, the energy and fire are on the Bernie Sanders-Elizabeth Warren left. Moreover, the crudity of party chair Tom Perez's attacks on Trump and the GOP, being echoed now by Democratic members of Congress, suggest that the new stridency to rally the angry left is gaining converts.

Trump's rough rhetoric, which brought out the alienated working class in the ten of thousands to his rallies, is being emulated by "progressives"—imitation being the sincerest form of flattery.

Nor is this unusual. After narrow presidential defeats, major parties have often taken a hard turn back toward their base.

After Richard Nixon lost narrowly to JFK in 1960, the Republican right blamed his "me-too" campaign, rose up and nominated Barry Goldwater in 1964. A choice, not an echo.

After Hubert Humphrey lost narrowly to Nixon in 1968, the Democratic Party took a sharp turn to the left in 1972 and nominated George McGovern.

A 21st-century variant of McGovernism seems be in the cards for Democrats today. The salient positions of the party have less to do with bread-and-butter issues than identity politics, issues of race, gender, morality, culture, ethnicity and class.

Free tuition for college kids, forgiveness of student loan debt, sticking it to Wall Street and the 1 percent, and bailing out Puerto Rico.

And impeachment—though a yearlong FBI investigation has failed to find any Trump-Kremlin collusion to dethrone Debbie Wasserman Schultz or expose the debate-question shenanigans of Donna Brazile.

And where are the Democratic successes since Obamacare?

The cities where crime is surging, Baltimore and Chicago, have been run for decades by Democrats. The worst-run state in the nation, Illinois, has long been dominated by Democratic legislators.

The crisis of the old order is apparent as well across the pond.

Jeremy Corbyn, a Bernie Sanders radical socialist, led his party to major gains in the recent parliamentary elections, as Conservative Prime Minister Theresa May saw her majority wiped out and faces the same seditionist grumbling as Nancy Pelosi. 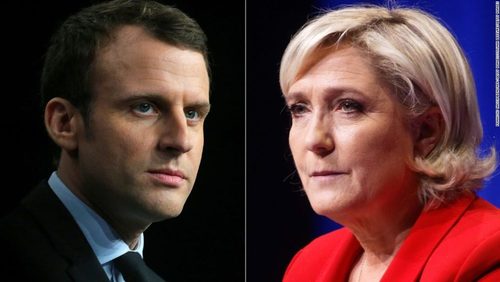 Western elites are celebrating the victory of Emmanuel Macron, the "youngest French President since Napoleon," who defeated Marine Le Pen by a ratio of almost 2-to-1 and whose new party, En Marche! (In Motion!), captured the Assembly. But the celebrating seems premature.

For the first time in the history of De Gaulle's Fifth Republic, neither the center-left Socialists nor center-right Republicans, the parties that have ruled France for 60 years, made it into the finals in a presidential election.

And while the first round of that election saw the ruling Socialist Party's candidate run fifth, with 6 percent, the votes of the rightist Le Pen and far left-Communist Jean-Luc Melenchon together topped 40 percent. It is the flanks of European politics that seem still to be hard and growing, and the center that seems shaky and imperiled.

Moreover, Macron faces daunting problems. Unemployment is nearly 10 percent, with youth unemployment twice that. Terrorist attacks from within Muslim communities continue to rise, as do the number of boats of Third Worlders migrating from across the Med.

Can anyone believe that, as these trends continue, Europeans will continue to back centrist policies and moderate politicians to deal with them?

Dream on. That is not the history of Europe.