When Will They Ever Learn? Karen Handel Shrinks From Immigration Issue in GA-6

Evidence continues to accumulate that (exactly as Ann Coulter and VDARE.com predicted) immigration was the decisive factor in Donald Trump’s upset 2016 victory. In fact, its potency as a political issue has been obvious for years, despite intense denial. Yet, apart from Corey Stewart’s heroic near-miss in this week’s Virginia gubernatorial primary, GOP elected officials and candidates are very slow to get the message. Case in point: hapless Establishment favorite Karen Handel’s campaign in the special election in Georgia’s sixth congressional district, to be held next Tuesday, 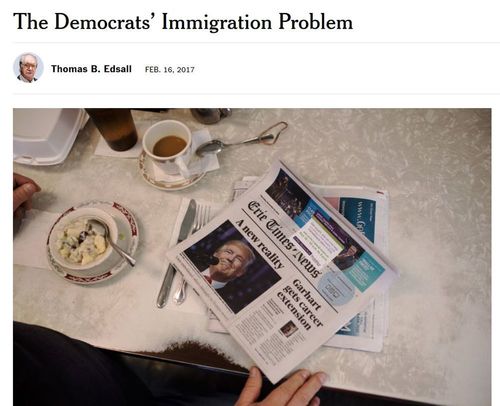 In an October 2016 report, Pew found that Trump voters were decisively more hostile to both free trade agreements and immigration than the general public, and much more hostile than Clinton supporters.

A detailed analysis of exit polls in four key states that helped deliver the election to Donald Trump — Florida, Michigan, Pennsylvania and Wisconsin — produced interesting findings not only about Hispanics, but also African-Americans — who are less supportive of liberal immigration policies than other core Democratic constituencies — and whites. In each of these states, opposition to immigration was higher than the national average.

But this word appears not to have registered with the two major-party candidates competing in Georgia. Handel, a former Georgia Secretary of State, faces Democrat Jon Ossoff a filmmaker and former staffer for Congressman Hank [‘Guam might tip over’] Johnson. Current and recent polling indicates a tight race, with Ossoff having an slight edge. [RealClearPolitics GA 6th District Polls, June 16, 2017]

Ossoff and Handel are studiously avoiding patriotic immigration reform, even though it offers low-hanging fruit as revealed in polling done by the Atlanta Journal-Constitution, Georgia’s Bigfoot newspaper:

Sixty-seven percent of likely voters in the hard-fought battle for Georgia’s Sixth District say illegal immigration is very or somewhat concerning — yet the Democratic and Republican candidates and the local media are ignoring the issue.

Indeed, both of these genius candidates blew off NumbersUSA’s candidate survey on immigration-policy topics (though the folks at Numbers were able to divine that Ossoff favors amnesty for illegal aliens). And their campaign websites’ treatment of immigration is at best pro forma (Handel: “True national security means securing our borders”; Ossoff: “America needs a strong border policy …”) where it’s not ignorant (Handel: “… create a viable guest worker program.”) or stupid (Handel: “The current immigration system is broken …”).

This, despite the fact that, according to Munro’s piece, “illegal immigration is far more important than abortion, so-called climate change and the Atlanta traffic” but “unless an illegal alien is a valedictorian or victim, the issue will not be brought up.”

Handel fits the mold of Republican candidates who seem to be obdurately clueless that the nation’s disastrous immigration regime is something to seriously learn about, then fruitfully campaign against. Yet today’s Democrats, unlike Democrats of old who actually cared about the environment and the working class, would be sitting ducks for sensibly-thought-out campaigns using the issue. 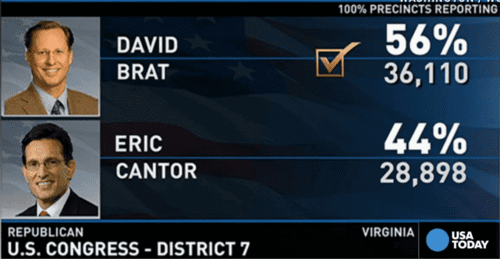 Evidence of the immigration issue’s political potency has been building for years:

* In the first of 2014's political earthquakes, obscure and underfunded economics professor Dave Brat decisively knocked off House Majority Leader Eric Cantor in the Republican primary for Virginia's Seventh Congressional District. (This was the first time ever that a sitting House Majority Leader had been defeated in a primary.) As VDARE.com's Washington Watcher showed, Brat's victory had everything to do with focusing on patriotic immigration reform.

Easily re-elected to his third congressional term (second full term) in 2016 with 57.7 percent of the vote, Brat continues to be visible on the subject and more generally—I regularly hear him interviewed by Laura Ingraham on her radio show. 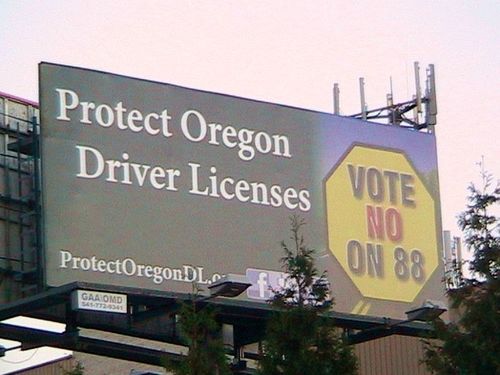 * Also in 2014—and in deep-blue Oregon—a legislature-passed law granting driver cards to illegal aliens was overturned by voters in a landslide, with “NO on Measure 88” getting 2/3 of the vote. Again, the results clearly show that immigration (at least the illegal variety) is unpopular with many Democratic-leaning voters, too.

* In 2012, voters in my state of Montana whooped through—with nearly 80 percent of the vote—a ballot referendum to deny some state benefits to illegal aliens. With that kind of margin, it’s absolutely clear that many people who tend to vote for Democrats supported the measure.

And that win for The National Question was accomplished without much of a campaign, by either proponents or opponents, beyond the plain language in the legislative referendum itself. So it accurately reflected Montanans’ “pristine” preferences, unswayed by advertising.

(Because of a drafting error in the referendum’s language, the Montana Supreme Court overturned it in May 2016, but the overwhelming vote favoring its passage was much more significant than what this law would have accomplished if in force.)

Note that in both Oregon and Montana, GOP state-wide candidates ran away from these immigration patriot initiatives—and lost.

* Other candidates before Dave Brat who focused on immigration policy in the national interest have won their elections going away, as reviewed by Rick Oltman more than six years ago (Polls are polls and pols are pols. The ultimate poll is Election Day., Examiner.com, November 10, 2010; Wayback Machine version here). For example, Rick wrote:

More evidence of the popularity of immigration law enforcement was produced in last week’s election. Arizona Governor Jan Brewer’s crushing defeat of her opponent after signing and defending SB 1070 wasn’t the only example.

In Kansas, attorney Kris Kobach was elected Secretary of State with 59% of the vote. Kobach most recently was co-author with Sen. Russell Pearce of Arizona’s SB1070 and everyone in KS knew it, and of Kobach’s other national work on the immigration enforcement issue.

[Links in original. Although the second of them goes to a page emblazoned with “2012 Kansas General Election Results,” the actual time-stamp on the page is “11/3/2010.”]

And what about when a prominent candidate is also a prominent squish on immigration? Then-Texas-governor and Republican presidential hopeful Rick Perry found out in 2011, when he said:

“If you say that we should not educate children who have come into our state for no other reason than they have been brought there by no fault of their own, I don’t think you have a heart,” Perry said at a Republican presidential debate in September….

Perry’s fortunes hadn’t recovered when he briefly entered the presidential fray again for the 2016 campaign, and today he is Secretary of Energy. [Snore.]

Back to Georgia’s special election: The Sixth District is strongly Republican—before resigning to become Secretary of HHS, Tom Price had been elected to the seat seven times, starting in 2004. He never received less than 61.6 percent of the vote (2016), and two of those times he ran essentially unopposed. (Results for the 2014 race, unaccountably missing from the immediately-preceding linked article, are here.) Further, Price had a career immigration grade of B+ from NumbersUSA.

But Karen Handel could be on the verge of losing this massive Republican advantage, apparently because of her (or her consultants’) blind dependence on business donations.

When will they ever learn?