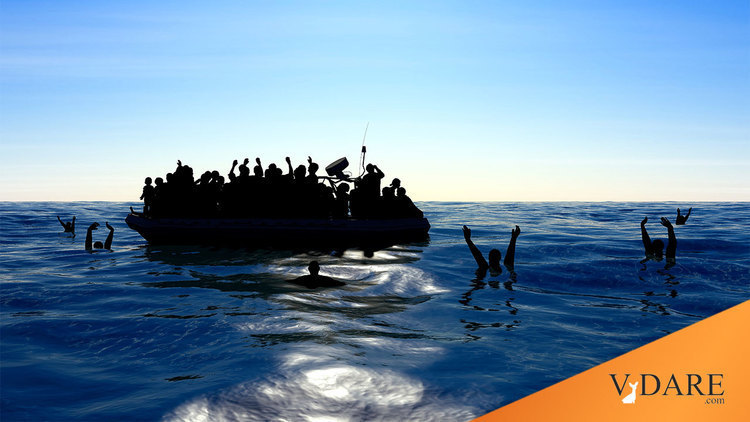 Nine years ago, when illegal aliens were coming out of the shadows to stage huge marches demanding “rights,” I wrote a column for National Review (!!!) with the title The Future Comes Apace. I took those words from Shakespeare’s play Timon of Athens. The title character of the play is a wealthy man who is too open-handed with his wealth. At last his generosity bankrupts him.

Timon’s steward brings him the bad news but at first it doesn’t sink in. Surely, says Timon, I have some land I can sell? No, replies the steward:

’Tis all engaged, some forfeited and gone;

And what remains will hardly stop the mouth

The problem with the future, as Timon discovered, is that it doesn’t come apace, until it does. The future mostly takes its time a-coming. During the years when Timon was blithely handing out his wealth to flatterers and false friends, the future was merely crawling towards him.

As with the proverbial frog in the boiling-pot, by the time the future decides to break into a sprint, it’s too late to do anything about it.

That’s the case with the actual future, at any rate. The imagined future, the future of our hopes and dreams, often fails to arrive at all, especially when the hopes and dreams are founded on false premises.

These metaphysical reflections were inspired by the two big news stories of recent days: the Baltimore riots and the Mediterranean boat people. 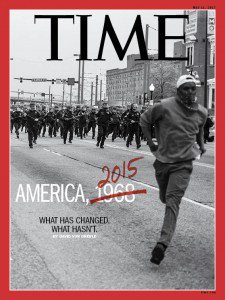 In my Radio Derb preview here on VDARE.com I showed the cover of last week’s Time magazine: a monochrome photograph from 1968 of a black demonstrator running from riot police. “America, 1968 2015,” said the legend “What has changed. What hasn’t.”

There’s a future that failed to arrive: the future of racial harmony we were all looking forward to in 1968. Once unjust laws were struck down, educational opportunities equalized, police forces integrated, and the highest executive offices opened to blacks, we believed, old antipathies would melt away and race would be a matter of concern only to the manufacturers of cosmetics.

How naïve we were! Half a century on, racial harmony is as far away as ever. It may actually be farther away. School segregation, for example, is by some reports worse than in 1968.[ Schools Are More Segregated Today Than During the Late 1960s, .By Emily Richmond, The Atlantic, June 11, 2012]

There were other, darker ideas current in 1968 about the future, too. The spectacle of thousands of Africans trying to gatecrash 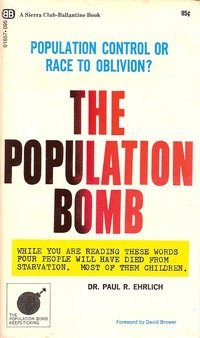 Europe reminds us of past pessimisms.

Paul Ehrlich’s book The Population Bomb, for example, came out that year, with its flesh-creeping opening statement that

The battle to feed all of humanity is over. In the 1970s hundreds of millions of people will starve to death …

Those years of the late 1960s and early 1970s saw the peak of post-WW2 neo-Malthusian alarm about overpopulation and resource depletion. Novelists and movie-makers caught the mood: Stand on Zanzibar (1969), Soylent Green (1973).

(Although sci-fi writers were as usual way ahead of the game: Pohl and Kornbluth’s classic The Space Merchants had come out in 1954. That is the novel in which one character sports a ring whose precious “stone” is a fragment of genuine oak.) 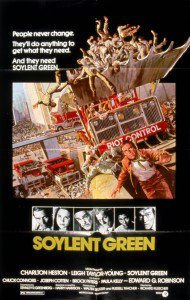 It is easy now to smile at Ehrlich and Soylent Green. Hundreds of millions did not starve to death in the 1970s; New York City’s population in 2022 will not likely be 40 million, as Soylent Green predicted, and will (almost certainly) not be feeding on protein from recycled human cadavers.

Looking back at the neo-Malthusian panic of fifty years ago, it’s tempting to conclude that every age needs its scenario of future doom. Back then it was overpopulation; today it is global warming, with the “robocaplyse”—out-of-control artificial intelligence—coming up fast on the inside.

Do these prophecies of doom appeal to something universal in the human psyche, distracting us perhaps from awareness of our own certain, individual future extinctions?

Were the neo-Malthusian alarms of fifty years ago just another future that failed to arrive, the premises all false?

Possibly. Stuff does happen, though. Timon of Athens did end up broke, a bitter misanthrope living in a cave; the proverbial frog was eventually boiled; the future often does, after a long slow crawl, at last come apace.

Looking at the pictures of Mediterranean boat people, and the U.N.’s latest population projections, it’s hard not to think that the future predicted by 1960s neo-Malthusians is coming apace; not worldwide as advertised, but in Sub-Saharan Africa at least.

The boat people pictures bring to mind, both literally as images of people in boats and as a metaphor for smug Europe vs. desperate Africa, a particular one of those neo-Malthusians.

I have in mind the biologist Garrett Hardin, author of the brutally frank 1974 essay “Lifeboat Ethics: the Case Against Helping the Poor.”

So here we sit, say 50 people in our lifeboat. To be generous, let us assume it has room for 10 more, making a total capacity of 60. Suppose the 50 of us in the lifeboat see 100 others swimming in the water outside, begging for admission to our boat or for handouts. We have several options: we may be tempted to try to live by the Christian ideal of being “our brother’s keeper,” or by the Marxist ideal of “to each according to his needs.” Since the needs of all in the water are the same, and since they can all be seen as “our brothers,” we could take them all into our boat, making a total of 150 in a boat designed for 60. The boat swamps, everyone drowns. Complete justice, complete catastrophe.

Hardin’s prescriptions for averting the Malthusian catastrophe—they included eugenics, an end to welfare and foreign aid, and allowing famines to take their course—were too strong for most people. He died in 2003, mostly forgotten (although not by Linda Thom, who wrote an obituary of him for VDARE.com.)

Are Hardin’s ideas due for a revival? That depends on how hopeless you think Sub-Saharan Africa is. As I myself have pointed out:

There is a case for optimism. Sub-Saharan Africa is a mighty big place, though you have to see it on a globe for full effect: the Mercator projection minimizes areas close to the equator. Population density overall in the subcontinent is around 100 per square mile. India’s is ten times that, in a worse climate. China’s is 367 overall, but metropolitan China’s—that is, ignoring Tibet, East Turkestan, and Inner Mongolia—is over 600. My bosky outer suburb of New York City has 1,500 souls to the square mile. The U.S.A. as a whole has 84.

Hong Kong, which includes fair-sized mountains and some uninhabited islands, has almost 17 thousand people to the square mile overall …

That turns one’s mind to the question: Why are the people of Sub-Saharan Africa fleeing their 100-to-the-square-mile homelands while the people of Hong Kong seem content in theirs even though it is 170 times more densely populated?

The boat people are not shy with answers when asked. Sub-Saharan African countries are, for all but a privileged few, awful places to live. An ex-trafficker described the motivations of the boat people thus: “Their attitude is: Better die for something than live for nothing.” [From Mali to Sicily: Reporting the migrants' route, by Alex Duval Smith, BBC News, April 21, 2015]

But why is that? Legacy of colonialism? Hong Kong was a colony, too—for much longer than most of Africa (155 years: Ethiopia’s colonial period lasted just five years) and until more recently.

Where is Sub-Saharan Africa’s Hong Kong? Where is its Sweden? Where, even, is its Portugal or its Slovenia? (To be fair, the place does seem to be well on its way to generating a North Korea: Paul Kagame’s Rwanda.) [The Global Elite’s Favorite Strongman, By Jeffrey Gettleman, NYT, September 4, 2013]

The most parsimonious explanation is a dearth of human capital. Sub-Saharan Africa doesn’t have enough smart people. The situation isn’t helped at all by the First World’s “generous” immigration policies further depleting the stock.

Generosity: humanitarianism: help for the helpless: is Sub-Saharan Africa sufficiently Malthusian to confound these noble principles? Garrett Hardin would have had an answer.

So, presumably, would Timon of Athens.

Baltimore RiotsCamp Of The Saints
<< Previous
Next >>
LATEST