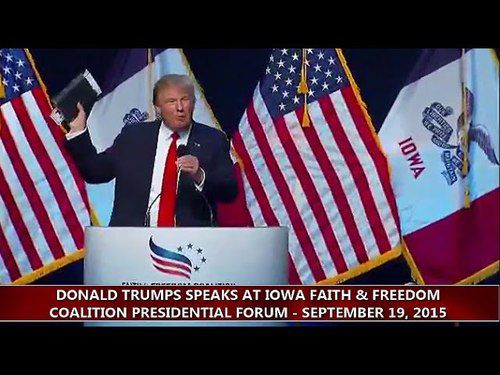 I recently attended the Trump rally in Oklahoma City (my son even got close enough to exchange greetings with him!) and I can testify that The Donald has a remarkable ability to connect to ordinary Middle Americans. Many are evangelical Christians, and Trump has been ahead among them in recent polls [Donald Trump strikes a chord – with evangelicals, by Matt Viser, Boston Globe, September 15, 2015]. But, in another example of “leaders” turning on those they purport to lead, Russell Moore, president of the Southern Baptist Convention’s “Ethics and Religious Liberty Commission,” tells us that “to back Mr. Trump, these [evangelical] voters must repudiate everything they believe.” [Have Evangelicals Who Support Trump Lost Their Values? New York Times, September 17, 2015]

Is Moore saying that any Christian who supports Donald Trump is betraying his Christian faith? As an evangelical Christian, I say that’s outrageous.

Moore of course is a passionate Amnesty supporter. He’s also part of the Evangelical Immigration Table, a pro-Amnesty “evangelical organization” that receives funding from globalist atheist George Soros. And he chose to bash his fellow Christians not in Christianity Today or some other publication that evangelicals actually read, but in the New York Times. Plainly, he’s just virtue-signaling that he’s not like those retrograde, narrow-minded evangelicals in the pews.

Moore admits there shouldn’t be a “religious test” for office and notes that “my Baptist ancestors were willing to make alliances with the heretical Thomas Jefferson” over religious liberty. But he claims Trump is different because:

We should… ask about his personal character and fitness for office. His personal morality is clear, not because of tabloid exposés but because of his own boasts. His attitude toward women is that of a Bronze Age warlord. He tells us in one of his books that he revels in the fact that he gets to sleep with some of the “top women in the world.” He has divorced two wives (so far) for other women.

But evangelical Trump supporters don’t admire his lifestyle, but his plans for the country. In particular, they admire how he’s championed patriotic immigration reform in the face of a hostile media/political/financial class.

We are electing a president, not a spiritual leader. (A good thing, considering what typical politicians are like!) Nothing in politics is certain, and we’ve got to hold everybody’s feet to the fire. But on the National Question, Trump appears to show genuine desire to secure the border, speak out on issues historically swept under the rug, and stand up for the historic American people and the American worker.

After all, as an immigration patriot billionaire, Trump is going against his peer group. In contrast, Moore is siding with his fellow evangelical “leaders” in support of Amnesty—even though his parishioners don’t want it. It’s the same elite/grassroots divide we see so often.

World Magazine has been conducting an “evangelical insiders survey” which it frankly describes as “a snapshot of how a group of well-connected evangelicals are leaning in the 2016 election.”

Yet have any of these candidates shown the explicit respect towards evangelicals that Trump has?

When Trump spoke at the Iowa Faith and Freedom Coalition Presidential Forum on September 19th he even brought his Bible. He opened his speech by holding it up and saying “Look, I brought my Bible. See, I’m better than you thought.” He went on to explain that the Bible had belonged to his devout Scottish mother, show his confirmation picture and to call himself a Christian.

Yet Moore harrumphs that this is insulting:

Mr. Trump tells us “nothing beats the Bible,” and once said to an audience that he knows how Billy Graham feels. He says of evangelicals: “I love them. They love me.” And yet, he regularly ridicules evangelicals, with almost as much glee as he does Hispanics. This goes beyond his trivialization of communion with his recent comments about “my little cracker” as a way to ask forgiveness.

Moore just doesn’t get it. Trump reminds evangelicals of friends and family members we all have, who don’t attend church much, but who still claim to be Christian. Who knows, with a bit more encouragement, they might become more active! Has Moore heard of the Prodigal Son?

But from a political point of view, Trump may be the most fearless defender of Christianity today—far more effective than the evangelical Christian George W. Bush.

Trump has already spoken out against the “War on Christmas.” And when Trump was pressed by the Main Stream Media for failing to “correct” a questioner who said Obama was Muslim, Trump’s campaign manager Corey Lewandowski hit back hard:

The media wants to make this issue about Obama. The bigger issue is that Obama is waging a war against Christians in this country. They need support and their religious liberty is at stake,” he added.

You never heard McCain or Romney say anything like that, did you?

Moore criticizes Trump’s defense, “up until very recent years”, of abortion. But how different is that from other GOP politicians?

Trump now says he’s changed on the issue and has adopted a pro-life position. Shouldn’t Moore be glad?

For a guy who goes out of his way to show “tolerance” to illegal aliens, Moore doesn’t seem to be willing to give Donald Trump the benefit of the doubt.

In a time when racial tensions run high across the country, Mr. Trump incites division, with slurs against Hispanic immigrants and with protectionist jargon that preys on turning economic insecurity into ugly “us versus them” identity politics. When evangelicals should be leading the way on racial reconciliation, as the Bible tells us to, are we really ready to trade unity with our black and brown brothers and sisters for this angry politician?

But in fact Moore and other leaders are promoting a “diversity” that resembles today’s Leftist PC multiculturalism more than the true Christian diversity expressed in the New Testament. It is, rather, the ethnic tribalists of “La Raza” and other such groups who are explicitly promoting racial division—but Moore doesn’t seem concerned about that.

And this is why so many evangelical Christians support Trump, despite Moore’s kvetching. Trump fights—and more importantly, he fights explicitly in the defense of Christian interests. Meanwhile, Moore is on the payroll of one of American Christianity’s most powerful enemies. He shouldn’t be lecturing us on “values.”