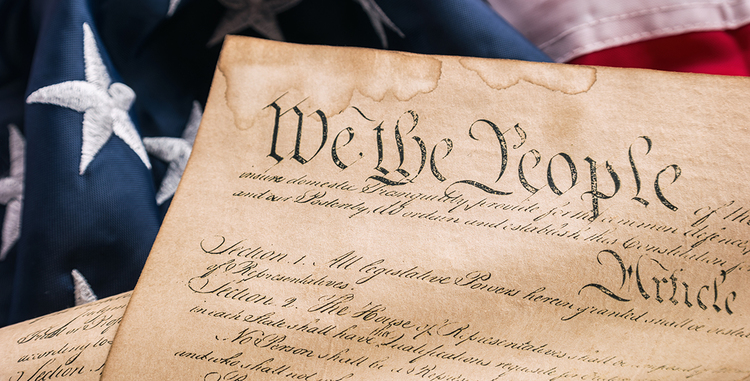 Christine And The Constitution

Kathy Shaidle points out that the law school audience who "gasped" when they heard Christine O'Donnell say that "Separation Of Church And State" wasn't in the constitution were proving their own ignorance. The First Amendment says that "Congress shall make no law respecting an establishment of religion, or prohibiting the free exercise thereof..."

The "church and state" language occurs in a private letter from Thomas Jefferson to Nehemiah Dodge, Ephraim Robbins, & Stephen S. Nelson, no doubt very patriotic citizens, but not part of the government.

The Library of Congress itself says that "This phrase has become well known because it is considered to explain (many would say, distort) the "religion clause" of the First Amendment to the Constitution... "

What else isn't in the constitution is birthright citizenship or jus solis:

In a debate with Democratic candidate Chris Coons, the two were asked if they supported repealing the 14th Amendment to the Constitution, which includes a clause that offers citizenship to any person born in the country. O’Donnell said she would uphold the amendment, but then said she supports closing the borders entirely.

“On illegal immigration I think that we have to close the borders before we discuss any sort of amnesty or DREAM Act or anything,” O’Donnell said.

“Securing” the borders has long been a rallying cry of both Republicans and Democrats this election cycle, but few, if any candidates have advocated closing them, which would block any immigration to the United States, legal or otherwise. O'Donnell calls for closing U.S. borders, By Chris Moody, The Daily Caller, October 19, 2010

See Weigh Anchor! Enforce the Citizenship Clause for details of why it would not take a Constitutional Amendment to stop birthright citizenship. The short version is that the Amendment itself contains the words "and subject to the jurisdiction thereof" to describe the persons "born or naturalized" within the United States.