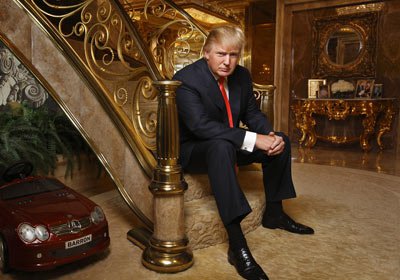 Donald Trump, Traitor to His Class

THE Donald Trump phenomenon is a great gift to pundits because it can be analyzed and criticized in so many different ways. But two shorthands seem particularly useful. First, Trump is essentially using the Republican primary to run a third-party campaign, not a right-wing insurgency. Second, Trump’s appeal is oddly like that of Franklin Roosevelt, in the sense that he’s a rich, well-connected figure — a rich New Yorker, at that — who’s campaigning as a traitor to his class. …

Nor does it mean that elites always get their way, even where there is bipartisan agreement. If they did, the Simpson-Bowles entitlement plan and comprehensive immigration reform would have passed many years ago.

But it does mean certain ideologies and worldviews get marginalized in national political debate. The libertarian who wants to cut defense spending, the anti-abortion voter who favors a bigger welfare state, the immigration skeptic who wants to keep Social Security exactly as it is … all these voters and many others choose the lesser of two evils every November, because neither party’s leadership has any interest in representing their entire worldview. …

Which is where Trump comes in. So far he’s running against the Republican establishment in a more profound way than the Tea Party, challenging not just deviations from official conservative principle but the entire post-Reagan conservative matrix. He can wax right wing on immigration one moment and promise to tax hedge fund managers the next. He’ll attack political correctness and then pledge to protect entitlements. He can sound like Pat Buchanan on trade and Bernie Sanders on health care. He regularly attacks the entire Iraq misadventure, in its Bush-era and Obama-era manifestations alike, in a way that neither mainstream Republicans nor Hillary Clinton can plausibly manage.

And he’s coming at all these issues, crucially, from a vantage point of privilege — which his critics keep highlighting as though it discredits him, when in reality it lends his populism a deeper credibility. He’s the Acela Corridor billionaire (albeit tackier than most) who promises to reveal what the elites are really up to, the crony capitalist who can tell you just how corrupt D.C. really is, the financier who’ll tell you that high finance can afford higher taxes. It’s precisely because he isn’t a blue collar outsider that he may seem like a credible change agent: Because he knows Wall Street, and because he doesn’t need its money to campaign, it seems like he could actually fight his fellow elites and win.

He won’t, of course, but it matters a great deal how he loses. In a healthy two-party system, the G.O.P. would treat Trump’s strange success as evidence that the party’s basic orientation may need to change substantially, so that it looks less like a tool of moneyed interests and more like a vehicle for middle American discontent.

In an unhealthy system, the kind I suspect we inhabit, the Republicans will find a way to crush Trump without adapting to his message. In which case the pressure the Donald has tapped will continue to build — and when it bursts, the G.O.P. as we know it may go with it.

By the way, I called Trump a “class traitor” in passing in my review of Ta-Nehisi Coates’ effusion back in July. And from a couple of Taki’s Magazine columns ago:

Candidates who aren’t entertaining enough to get themselves free airtime are beholden to wealthy donors. And one of the strongest forces in the world in recent decades has also been one of the least discussed: class solidarity among billionaires.

Now, you might think that having a billion dollars would free you to indulge in a Trump-like blast of a good time telling unwelcome truths. But in reality, we largely have a highly disciplined class of the extremely rich, who gather frequently in Davos and Aspen to be informed of the latest talking points about why any resistance to them is racist.

While the rich and powerful used to gloomily plot together in secret Bilderberg confabs, the current generation finds it more effective to invite the media to their conferences on how to fight nativist bigotry (and, by the way, high wages) by flooding working-class neighborhoods with Third Worlders. Thus, billionaires and journalists have become coconspirators against the public weal. That’s a tough tag team to beat.

Over the past two months, Trump has caused a sensation by violating billionaire class solidarity by criticizing mass immigration, the single most unifying political issue for plutocrats.