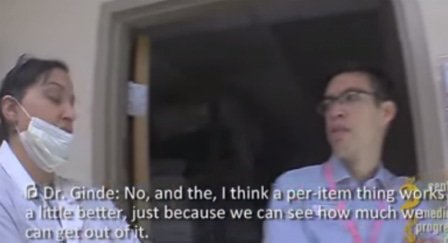 The Baby Butchers and Their Media Butchers

"I'd say a lot of people want liver."

The propagandists of Planned Parenthood don't want you to remember that earlier this summer the group apologized for the "tone" of one of its top officials, Deborah Nucatola, who casually hawked unborn baby parts to undercover journalists from the Center for Medical Progress as she swilled wine and chomped on a salad.

Not long after confessing that the "tone" of their butchers might cause offense, another top Planned Parenthood trafficker, Mary Gatter, joked about scoring a luxury car after haggling over $75 baby-organ price tags.

"I want a Lamborghini."

"You know, in negotiations, whoever throws out the figure first is at a loss, right?" Gatter nattered on. "I just don't want to lowball."

"I think a per-item thing works a little better, just because we can see how much we can get out of it."

As Ginde poked through dishes of her bloodied products, she ghoulishly joked about what "it" is. Or rather, was:

Ten lengthy, damning videos later, the billion-dollar abortion giant is in full-blown whitewash mode—and its bloodstained accomplices in the liberal media are out in force with their paint rollers.

Vox.com's Sarah Kliff called descriptions of one of the most gruesome clips CMP released "pure fiction"—and then grudgingly linked to the video after being called out on social media.

The professional mainstream media doctors have some nerve complaining about "edited" content and manufactured narratives. It is, and always has been, their bread and butter.

Take NBC. Reminder: This is the network that surreptitiously rigged GM pickup trucks in staged crash tests in 1993 to show that the vehicles were unsafe—and failed to inform viewers that the simulations used incendiary devices to ignite the explosions. Jane Pauley admitted in a nationally televised apology that "NBC's contractors did put incendiary devices under the trucks to ensure there would be a fire if gasoline were released from the gas tank. NBC personnel knew this before we aired the program, but the public was not informed because consultants at the scene told us the devices did not start the fire."

NBC is also the home of phony Islamophobia stings at NASCAR races and "To Catch a Predator" hidden camera sting operations. ABC News' "Primetime Live" adopted similar tactics in Alabama and Texas. CBS is the network that attempted to pass off fake National Guard memos to bring down George W. Bush.

Sound bites, broadcast packages, cut pieces. Every day in elite American journalism is an exercise in slicing and dicing to fit the left-wing agenda. "Professional" journalists view undercover work as a noble enterprise for the public and national interests—but only if it serves and reinforces their partisan and political worldviews.

The vehement campaign by both the baby butchers of Planned Parenthood and the media butchers of the Fourth Estate to discredit the work of the Center for Medical Progress makes undeniably and indelibly clear: Pro-life journalists have struck a nerve. Like the innocent victims in the dozens of hours of barbaric footage available to anyone willing to open their eyes, the truth-tellers must be destroyed.