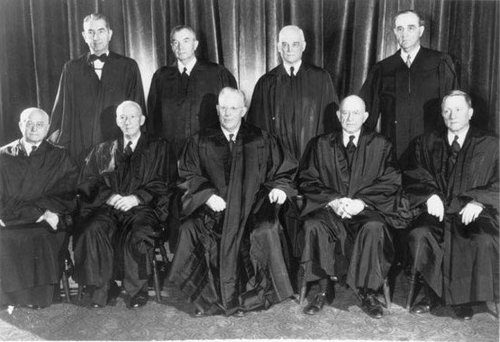 Protestants And Catholics On The Supreme Court

Above, the Warren Court that decided Brown v. Board

In an otherwise excellent diagnosis of the The Big Problem, meaning Conservatism, Inc., John Derbyshire fired a throw-away line that isn't as true as it sounds:

Protestants have been purged from the U.S. Supreme Court lest they should assert the interests of our founding population.

This idea alludes to the court's Catholic-Jewish majority, and it has two problems. First, no one "purged" the Protestants. I understand what he means, but the word is too loose.Second, even if a Protestant majority controlled the court, it would not assert the interests of historic Americans.

A little history:The disastrous Gitlow decision of 1925 which finished erasing what remained of state constitutional prerogatives by "incorporating" the federal bill of rights into the 50 state constitutions, came from a court with a Protestant majority.

Chief Justice Howard Taft and Associated Justice Oliver Wendell Holmes were Unitarians, and Willis Van Devanter was Episcopalian, as were others. The one Catholic on the court was Pierce Butler, the one Jew, Louis Brandeis.

Butler, by the way, was the one dissenting vote when the evil Holmes led the court to decide that government had a right to forcibly sterilize what it determined to be the "feebleminded." Holmes wondered whether Butler's "religion" influenced him. Yeah, it probably did. There is a law higher than that of the Supreme Court's rulings. Protestants used to know this, and now even Catholics, such as Justice Anthony Kennedy, friend of homosexual "marriage," have forgotten it.

Brown v. Board is another decision the Protestant majority on the court gave us, along with Engel, which banned school prayer; Griswold, which overturned anti-contraception laws; Roe, which legalized abortion; and, of course, Loving, which outlawed anti-miscegenation statutes.

The court's Protestant majorities decided all these decisions wrongly not only on constitutional but also on cultural and religious grounds.

Thus, the problem with the court isn't that Protestants were "purged." The problem is that liberal Protestants destroyed the federalism in which our primordial law, the Constitution, is rooted. Federalism is merely a political synonym for subsidiarity, an old-fashioned Catholic idea.

Liberal Protestants gave us the jurisprudence under which we suffer today. The liberal Catholics and Jews on the court now merely accepted the baton they passed.