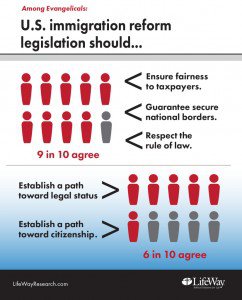 The latest attempt in the endless campaign to megaphone Evangelical Christians into supporting illegal alien Amnesty: a poll [PDF] released by Lifeway Research and sponsored by the Soros-supported Evangelical Immigration Table.

Christianity Today, ever credulous on this subject, put the provocative title Bible Influences Only 1 in 10 Evangelicals on Immigration Reform [By Bob Smietana, ChristianityToday.org, March 11, 2015] on the report. Over at the Lifeway Research website, the same piece was entitled Evangelicals Say It Is Time For Congress To Tackle Immigration, which makes it sound as though evangelicals are gung-ho for Amnesty.

Here’s how reporter Smietana sums up the poll:

When it comes to immigration reform, American evangelicals want it all. Nine out of 10 (86 percent) want more border security. Six in 10 (61 percent) support a path to citizenship for undocumented immigrants. More than two-thirds (68 percent) favor both. And they want Congress to take action soon. Those are among the results of a new survey of evangelicals from Nashville-based LifeWay Research. The study, sponsored by the Evangelical Immigration Table and World Relief, found widespread support for immigration reform.

Hold it right there! Those two sponsors are: There’s a whole VDARE.com file on this Treason Lobby front group—it’s a branch of the National Immigration Forum, funded by globalist atheist George Soros. Now why would Soros be pumping money into a Christian group if it didn’t support his goals? A Christian charity that takes freewill offerings to relieve the poor of the world? Would that it were so! World Relief gets most of its funding, not from freewill offerings given by cheerful givers as prescribed in the Bible, but from the federal government—that is, from the taxpayers (who aren’t generally “cheerful givers”). Your tax dollars are supporting World Relief’s pro-Amnesty agenda.

Commenting on the recent poll, Scott McConnell, Vice-President of LifeWay Research, assures us that “Evangelicals are united in their desire for significant immigration reform”—a.k.a. Amnesty.

Of course, they aren’t. Look at this poll and see how the questions were worded. That makes a big difference to the responses. The result: what VDARE.com calls “pollaganda.”

Which of the following reflect your beliefs? The number of recent immigrants to the United States are… (Select all that apply)”

Here were the options Respondents were allowed to select all of these. And some might actually agree with all or nearly all of them. Note, however, that the answers mix up personal Christian duties (evangelism and benevolence) with duties that are appropriate for the state. That’s a part of the guilt-trip strategy, insinuating that if you believe in deporting illegal aliens, then you don’t believe in evangelism and benevolence.

Note also that Christian Open Borders Boosters make it sound like the U.S. of A. is the only country in which you can practice Christianity, help the poor and evangelize. But why can’t people be loved, evangelized etc. in their own countries?

“How important is it to you that the Congress pass significant new immigration legislation this year?”

Some 37% said new legislation was “very important” with 32% opting for “important”.

Somehow, I don’t think that’s what these pollsters had in mind.

“Do you believe immigration reform legislation should respect the God-given dignity of every person?”

To that question, 82% voted yes. I’m surprised it wasn’t higher.

Again, I support the dignity of all people. But can’t we respect their dignity while deporting them? Or better yet, keeping them out of the country and letting their dignity be respected in their home country?

“Do you believe immigration reform legislation should protect the unity of the immediate family?”

Well, I too believe we should protect family unity—by deporting the whole family. They can be together in Mexico or Central America or wherever they came from.

“Do you believe immigration reform legislation should respect the rule of law?”

To that question, 88% responded in the affirmative.

And, a whopping 90% responded in the affirmative to Question #7:

“Do you believe immigration reform legislation should ensure fairness to taxpayers?”

Now it’s time to work Amnesty into the poll! Question #8:

“Do you believe immigration reform legislation should establish a path toward legal status for those currently here illegally who meet certain qualifications for residency?”

Note that, once again, the question was deliberately vague. (“Certain qualifications for residency”?)

“Do you believe immigration reform legislation should establish a path toward citizenship for those who are here illegally, are interested, and meet certain qualifications for citizenship?”

Note that this goes farther than the previous question, offering citizenship—not just “legal status.” And yet a larger percentage (61%) responded Yes. That doesn’t make sense, indicating to me that those who were polled weren’t really thinking clearly at this point.

“Please indicate if you would or would not support changes to U.S. immigration laws that would …both increase border security measures and establish a process so that those immigrants in the U.S. unlawfully could earn permanent legal status and eventually apply for citizenship if they pay a fine, pass a criminal background check, and complete other requirements during a probationary period.”

(Where have I heard this before?)

To that question, 68% replied: “I would support these combined changes.”

Given the fact that this scenario is a fantasy, and that it was tried before (1986), it’s blatantly a bait-and-switch—enact Amnesty and then renege on border security.

“In the upcoming Presidential elections, if a candidate supported the changes described above, would you be:

Sounds like a warm-up for a Jeb Bush campaign!

“Which one of the following has influenced your thinking the most on immigration?”

“Have you ever heard immigration discussed at your local church in a way that encouraged you to reach out to the immigrants in your community?”

“I am very familiar with what the Bible has to say about how immigrants should be treated.”

“The arrival of immigrants to the United States presents a great opportunity to share Jesus Christ and make disciples of all nations within our own communities.”

What Christian could be against having the American government allow millions of immigrants in so they can be evangelized?

All of them. In the Great Commission, Christ commanded “Go ye therefore and teach all nations”—not “Bring everybody to your country and preach to them there while your own country is being ruined”.

“I would value hearing a sermon that taught how biblical principles and examples can be applied to immigration in the United States.”

These last questions provoked Amnesty-booster Leith Anderson [Email him] president of the National Association of Evangelicals and a leader of the Evangelical Immigration Table, to bemoan evangelicals’ supposed lack of piety:

The sad part of this research on immigration is that American evangelicals are more influenced by the media than by their Bibles and their churches combined. We need to turn off our TVs and open up our Bibles. [Evangelicals Say It Is Time For Congress To Tackle Immigration, By Bob Smietana, LifewayResearch, March 11, 2015]

The poll breaks the results down demographically, revealing, for example, that Hispanic Evangelicals were more likely to favor a path to legal residency or citizenship than any other ethnic group.

Although Amnesty-boosters may use the results of this poll to trumpet evangelical support, I wouldn’t be so quick to assert that. For one thing, as we know, the way a poll is worded has a lot to do with the responses it elicits.

Back in 2013, another poll contacted evangelicals who were likely Republican voters. Some 68% opposed giving work permits to illegal aliens, 73% said that immigrants competed with Americans for jobs, 64% thought the issuance of green cards to legal immigrants was too high, 77% said the government wasn’t doing enough to fight illegal immigration, and 83% supported E-Verify.

Note that these questions were much more specific than in this 2015 Treason Lobby poll, which makes a big difference

And consider this question: “Are you more likely to vote for a political party that supports enforcing immigration laws first or that supports legalizing illegal immigrants first?” The answer was 84% for enforcement first.

As CIS’ Steve Camarota pointed out

…the level of public support for amnesty depends heavily on how the question is asked. For example, this Reuters poll asked the question differently than Pew and found that a majority of Americans want most illegal immigrants to go home. And Kellyanne Conway of the Polling Company asked if people supported “encouraging illegal immigrants to go back to their home countries by keeping them from getting jobs and welfare” and found that two-thirds of the public agreed.

Give Me Your Tired Arguments, Your Poor Reasoning, Steven Camarota, CIS.org, March 28, 2015

I exhort all Christian readers to resist the pro-Amnesty guilt tripping, and resist illogical and anti-Biblical pseudo-justifications for Open Borders, which is a globalist position, not a Christian doctrine.

George Soros is not giving money to the Evangelical Immigration Table to promote Christianity.