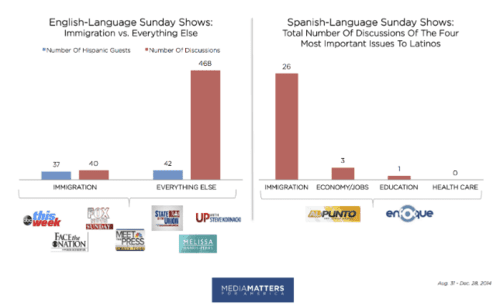 From the Media Matters Report.

The Soros-funded Cultural Marxist vigilante group Media Matters is always eager to attack anything that doesn’t support its Leftist agenda—including VDARE.COM and me, after I did an extremely brief interview on Fox TV. (See it here).

Media Matters’ Simon Maloy subtly entitled his blog Fox News hosts columnist from hate website VDARE to discuss AZ immigration law . It included the usual pro forma denunciation of VDARE.COM as “a virulently anti-immigration website” and of course referred to the Southern Poverty Law Center ($PLC to VDARE.com). Then Maloy dredged up some of my previous “inflammatory columns”.

What on earth is Media Matters complaining about? Is it because the shows don’t include Hispanic guests?

No, the problem according to Media Matters is the topics that the shows ask their Hispanic guests to discuss.

Sunday shows in both English and Spanish treat Hispanics as a single-issue constituency focused on immigration, according to a Media Matters analysis…While Latinos make up more than 17 percent of the U.S. population, the report found that only 7 percent of guests on English-language Sunday shows were Hispanic, of which 46 percent spoke specifically about immigration. The report also found that while the Spanish-language Sunday shows devoted great attention to immigration, they gave much less coverage to issues of similar importance to the Latino community.

So Media Matters is complaining that about half the Latino guests were invited to discuss immigration? Wait a minute!

Americans have been specifically assured by Jorge Ramos of Univision that immigration is the most important issue that tells Hispanics where politicians stand. The MSM tells Americans they must really listen to Latinos (or at least, the Latino leftists who claim to speak for them) on immigration. Even leading influential Republicans tell their party how important it is to listen to Hispanics on immigration—otherwise, they´ll never vote for the GOP (which they won’t anyway).

So is Media Matters saying that’s wrong? Is it saying that we should listen to Americans who want the border controlled and who oppose Amnesty?

No, that’s not it either.

Here is its convoluted reasoning:

Confining Latinos' perspectives to a single issue damages their ability to engage in discussions about the other equally important issues that affect them and the general electorate.

So, we must listen to Latinos on immigration, but we must also listen to them on every other topic—or risk damaging “their ability to engage in discussions” about “equally important issues.”

How did Media Matters arrive at this conclusion? Well, it watched “seven English-language Sunday shows” and two Sunday shows in the Spanish language for 18 weeks, including “the peak of the 2014 midterm election season and its aftermath”.

On the English-language Sunday shows, Media Matters complains: “Hispanic guests are treated as experts in only one subject, rarely invited to discuss issues other than immigration”. Boo hoo.

But even Telemundo and Univision came in for criticism. It seems that the two Spanish-language Sunday programs—and this is a big shocker—“prioritize immigration coverage over discussions of other issues that Latinos have identified as important to them” and

… devoted a significant amount of discussions to immigration, rarely discussing other domestic political issues that concern their audience just as much. Immigration was discussed almost nine times more than jobs and the economy and 26 times more than education, while health care was never discussed on these shows during the period of the study.

Well, Media Matters, why is this surprising? After all Univision’s dual-citizenship anchorman and Amnesty booster Jorge Ramos recently said that, though economy and education are important to Latinos, that

…immigration is personal. Immigration is the issue that tells us who is with us and who is against us; there’s no question about it. And it’s very simple to understand why — half of all Latinos over 18 years of age were born outside the United States. It really makes no sense to attack them and criticize them if you want their vote.[Jorge Ramos, Voice of Latino Voters on Univision, Sends Shiver Through G.O.P., By Jackie Calmes, NYT, January 23, 2015]

Jorge himself says that immigration is The Most Important Issue. So you can’t really fault Spanish-language shows for focusing on that, now can you?

What’s really going on: Media Matters wants more Latinos on TV and wants them to push a broader Leftist agenda.

What we really should be asking: Why do we have so much Spanish-language media in our country, anyway?

Besides Univision and Telemundo, there are many Spanish-language newspapers. The biggest is La Opinión of Los Angeles, which I’ve blogged about frequently (see here and here). Guess who, by the way, is now a columnist for La Opinión? It’s none other than Elvira Arellano. Yes, illegal alien Arellano, who returned to the United States a year ago.

For many Hispanics, these Spanish-language outlets are their principal, or only, sources of news and opinion.

As a Spanish-speaker myself, I recognize the value of speaking a foreign language. But these people don’t see Spanish in the U.S. as a foreign language. They demand it become a language integral to American society, particularly in politics and the media.

If present trends continue, Spanish will reach parity with English and even supplant it. Outrageous? It’s already happening in many communities across our nation.

Congressman Steve King has just introduced the English Language Unity Act. Now that the Republicans have majorities in both chambers of Congress, why doesn’t the congressional GOP leadership get behind it? After all, polling indicates the overwhelming majority of Americans support English as our national language. It would be a winning issue, especially moving into an election cycle.

The next few decades may determine if the U.S. remains an English-speaking nation—or whether our politicians have succeeded in saddling us with the Canadian curse of official bilingualism.

(Helpful note to readers: I’ve been writing about the problem of imported Spanish on VDARE.com since at least 2002—Spanish and the New Conquistadors; “Nuestra Gente” And The National Question In Texas. See also How A VDARE.COM Article Landed Me A Cameo Role In A PBS Documentary. Below, some more recent posts).