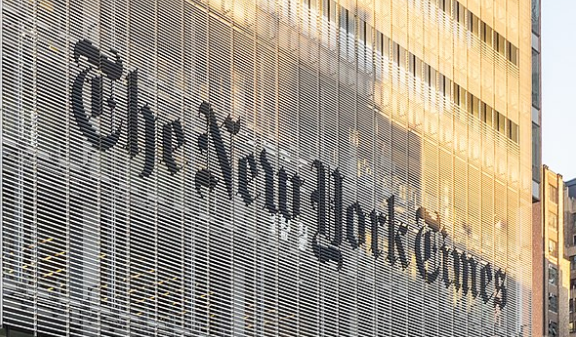 The biggest shareholder of The New York Times, "America's Paper of Record"  is now Mexican telecoms etc. mogul Carlos Slim (currently the world's second-richest man).   Is there any conflict of interest here?  Or would the New York Times be just as big an open border booster without Slim?   Anyway, it doesn't look good.

Carlos Slim Helú, the Mexican billionaire, has more than doubled his stake in The New York Times Company, to nearly 17 percent, the company said on Wednesday.

Mr. Slim exercised warrants to acquire nearly 16 million shares of the company's Class A stock at a price of over $6.36 a share, the company said, increasing his stake from 7 percent. He now owns nearly 28 million shares in total.

The company received more than $100 million in the transaction, it said, which it intends to use to repurchase Class A shares – a different category from the controlling Class B shares held by the Sulzberger family. Carlos Slim More Than Doubles His Stake in times Company by Ravi Somaiya, CNBC.com, January 14, 2015

You'd think that somebody in the Mainstream Media or in the U.S. Congress might at least raise a question about "America's Paper of Record" being partially owned by Mexico's Richest Man, Mexico's Open-Borders Billionaire: Carlos Slim. America's Senator, Senator Sessions, is aware of Carlos Slim, and mentioned the Mexican mogul in his "Masters of the Universe" speech.     I'd like to see Sessions talk more about Slim in the future.

Slim bought the shares for almost $6.36 each, about half of Times Co.’s $12.28 closing price, Times Co. said today in a statement. That boosted his stake to 16.8 percent of the company’s Class A shares.

The world’s second-richest person gained the options after he lent the paper $250 million in January 2009 to help it get through the financial crisis. That loan was already repaid early and with interest, and the gap between the exercise price and Times Co.’s share price gives Slim an additional potential profit of about $94 million.

The larger stake, now 27.8 million shares, shows the billionaire’s confidence in the newspaper’s future — at least from a financial perspective — even as readers and marketers have flocked to the Internet where content is largely free and ad rates are cheaper. Since Slim’s loan, Times Co. has cleaned up its balance sheet, created a paywall for its website and introduced new digital products.

Slim planned to hold on to the expanded equity stake after exercising the warrants, rather than sell the shares for an immediate profit, a person with knowledge of the matter said last year. Billionaire Carlos Slim Doubles Holdings in New York Times,  by Patricia Laya and Jerry Smith, Bloomberg, January 14th, 2015

Could Slim take over the NYT company?

Even with the bigger stake, a takeover would be difficult because the controlling owners — the Ochs-Sulzberger family — hold voting shares that give them a firm grip on board seats. Slim’s stake only allows him to vote for Class A directors, a group that represents no more than a third of the company’s board seats. The family’s Class B shares, which aren’t publicly traded, elect the remaining two-thirds of the board.

OK, but regardless of what kind of shares Slim has, you don't suppose that owning such a big chunk of the Times has no influence whatsoever?