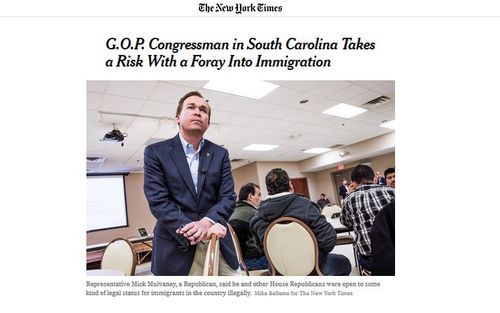 Above, Congressman Mulvaney talks to illegal aliens in their own language in Gaffney, South Carolina

The Treason Lobby seems to have complete control of the South Carolina GOP, as VDARE.com’s Patrick Cleburne just pointed out. He cited the recent gushing New York Times advertorial boosting Congressman Mick Mulvaney, who just held a “town meeting” geared toward “Latinos,” some of whom made clear they were illegal aliens. (So much for “living in the shadows”). Mulvaney spoke and answered questions entirely in Spanish. [G.O.P. Congressman in South Carolina Takes a Risk With a Foray Into Immigration, by Julia Preston, February 21, 2014].

We’re supposed to be impressed. But as a fluent Spanish-speaker long-resident in Mexico, who now teaches Spanish in an American public school, I most decidedly am not.

Even mass immigration boosters usually claim to support assimilation through the English language. And the various amnesty proposals give lip service to having Amnesty applicants learn English. So why should Rep. Mulvaney, supposedly a conservative Republican, be talking in Spanish? [Mulvaney dusts off Spanish skills for town hall in Gaffney, By Lynne P. Shackleford, GoUpstate.com, February 17, 2014]

But the Republicans have been following the trend of creeping bilingualism for several years now.

Even more surprising to the spellbound crowd at the First Baptist Church, Mr. Mulvaney said he and other conservative House Republicans were open to some kind of legal status, although not a path to citizenship, for many immigrants living in the country illegally. But he also said it would not happen this year: Republicans just do not trust President Obama to carry out any law they might enact.

But how revolutionary is the Mulvaney approach? The House GOP leadership appears to be for Amnesty - and for Bilingualism. How surprising is it that some lower-level flunkey would drink the Kool-Aid (especially considering there’s big donor money involved?).

Needless to say, “legal status but no path to citizenship” is a scam. If the illegals are legalized, how long until the Democrats figure out a way to naturalize them? And their American-born anchor babies, don’t forget, are already citizens.

Preston claims Mulvaney’s boldness is all part of a Trend:

The politics of immigration are gradually shifting in South Carolina and some other Southern states, where not long ago most conservatives passionately rejected legalization as amnesty that rewarded lawbreakers. Like Mr. Mulvaney, a number of Republicans are moving toward the view that the immigration system needs fixing, and that 11.7 million illegal immigrants will not be deported and need a path to legal status.

Notice how approvingly vague this is – “gradually shifting”, “moving toward the view”. No hard numbers there, but it’s meant to influence the way people think, to get them to jump on the bandwagon.

Preston does admit that the Amnesty Express faces danger in South Carolina:

But Mr. Mulvaney first rode to office on the Tea Party wave in 2010, ousting a long-serving Democrat, and he knows his voters. If he moves too far too fast, he could awaken their ire. “If Mick Mulvaney would come out tomorrow to do immigration reform, somebody from the Tea Party would challenge him,” said Karen Martin, a founder of the Tea Party group in Spartanburg, on the edge of Mr. Mulvaney’s district.

Karen Martin [Twitter] is quoted several times and makes a good economic argument against amnesty – keep it up, Karen!

appears to be comfortably safe in his seat, after redistricting in 2012 made it more favorable to Republicans. Facing no Republican primary challenger so far this year, he has done little campaigning.

Could a VDARE.com readers run against him?

Of course, there is pressure on Mulvaney from the usual suspects. Preston reports:

“Growers, farmers, manufacturers and hotelkeepers are becoming more outspoken with Mr. Mulvaney about their urgent need for legal immigrant workers for low-wage jobs.”

And misguided pro-Amnesty Evangelicals are involved. This detail caught my attention:

Evangelical Christian clergy members have also called for action, including the Hispanic pastors who brought busloads of parishioners to the town hall. Mr. Mulvaney was impressed, saying the meeting was among the most well-attended of some 40 he has held.

Hmmm. The tactic of busing people to a political event is widely used in Mexico, often with the enticement of food. So here we have “Hispanic pastors”, probably raised in Mexico and Central America, using the bus trick in South Carolina.

The irony: in Mexico, clergymen aren’t allowed to participate in politics.

Hey, I could probably make some money helping GOP consultants use Spanish to appeal to the Hispanic vote. Why not?

Why not? Because it’s wrong. Political speech in the United States should be in English. And most Americans agree.

The use of Spanish in politics impedes assimilation and balkanizes the electorate. It’s hard enough to keep track of what these slippery politicians say in one language – how about two, or three or four? English is our civic language and should remain so.

I’ve written a number of VDARE.com articles on this topic. There was Spanish and the New Conquistadors which led to an appearance on a PBS documentary entitled “Do you Speak American?” (See How A VDARE.COM Article Landed Me A Cameo Role In A PBS Documentary).

In other words, foreign languages should remain foreign.

But after I moved back to the U.S. and became a Spanish teacher, I discovered that Spanish textbooks, to varying degrees, are promoting linguistic colonization. See Hispanic Triumphalism, Globalism In School Spanish Textbooks—Courtesy of U.S. Taxpayer.

Despite Mulvaney’s Hispandering, he’s not going to get any significantly increased share of the Hispanic vote.

The real reason most Hispanics don’t vote for the GOP: most of them are just more oriented toward Big Government.

All this pandering cannot help unless the Republicans go farther left than the Democrats. And that’s getting harder to do by the year!

Of course, Republicans should appeal to Hispanic voters— but as Americans, not as Hispanics.

Instead of encouraging Hispanic voters to be selfish and separate from American society, the GOP should appeal to Hispanics as to other Americans, in English and with the same principles.

I really doubt they’d do any worse—and, who knows, they might pick up a few percentage points!

But the Mulvaney Method is just a prescription for GOP, and American, surrender.