Medina Mora (Mexican Ambassador to U.S.) and Sada (Mexican Consul in LA) Optimistic About Mexican Agenda in the U.S. 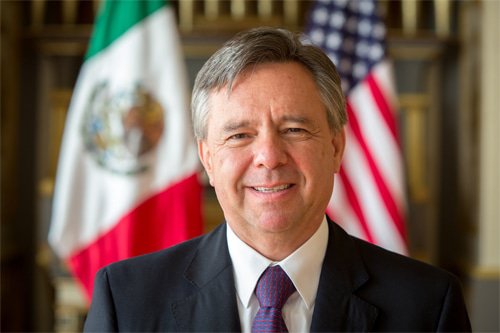 The comments were made in Mexico, publicly, by Eduardo Medina Mora who is Mexico's ambassador in the United States, and Carlos Sada, who is Mexico's consul general in Los Angeles. So Medina Mora and Sada hold, respectively, Mexico's #1 and #2 diplomatic posts in the United States. Mexican diplomats in the U.S. constantly meddle and influence U.S. immigration system. Yet almost nobody complains about this. Why?

The diplomats' statements were made at the Foro México en el Mundo (Mexico in the World Forum), hosted by the Mexican Senate.

Quoth Consul Sada: "Local allies are fundamental for this purpose, and the lobbying that can and should continue on the local level is fundamental to affect the great decisions."

Sada delivered a short history "of actions in which politicans of California have been key in helping the largest migrant community of the U.S., from the recognition of the matricula consular as an ID for driver's licenses to the visits to Mexico of Governor Jerry Brown and Mayor Eric Garcetti. "

And guess what Garcetti has recently done? Sada proudly informed his listeners that Garcetti has established "a special fund", with a target amount of 40 million dollars, "to help to pay the undocumented community the fees that DAPA and DACA will charge them."

As for Ambassador Medina Mora, he thinks that the U.S. Department of Justice (run by Eric Holder) is going to bring about "a better future for the Mexican community in the United States."

A country that protected its own sovereignty (not the current U.S.A. of course) would never tolerate such blatant meddling by foreign diplomats. Yet they don't even try to hide it. These things weren't said at some secret meeting, but were said publicly.

Of course, they have plenty of allies in the United States.