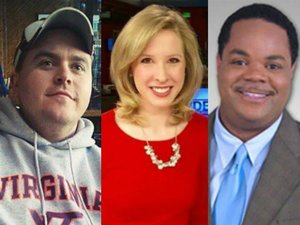 The two commonest topics stirred up by crazy shootings like Vester Lee Flanagan II’s murder of reporter Alison Parker and cameraman Adam Ward, are, one, gun control, and two, treatment of the mentally ill. Nobody has anything to say about either than makes much sense to me.

Gun control? Plenty of jurisdictions have more liberal gun laws than Virginia, with very little gun crime. The BBC reported two years ago that the nation of Iceland is, quote, "awash with guns," yet the homicide rate in Iceland is essentially zero. Similarly with Switzerland. Vermont has the most liberal gun laws in America, yet it's not notorious as a hotbed of gun crime.

The mentally ill? It's plain from the manifesto that Flanagan was crazy as a coot: or, to quote his own precise words, "Yeah, I'm all f—-d up in the head.”. Like Dylann Roof in Charleston, Flanagan was in fact in the long line of homicidal lunatics in America who have hoped to ignite a race war. As Radio Derb pointed out back in June, that line also includes kindred psychos Charles Manson 46 years ago and John Brown 156 years ago. Nations have their own styles in lunacy, and this is one of the classic American styles.

But do we even have a firm definition of "mentally ill"? Do we even want one? I'm not sure that I do. Many Goodwhites believe that we Badwhites are mentally ill for not going along with the Narrative. I'm sure a lot of them would like to lock us up in asylums, as happened to dissidents in the old U.S.S.R.

The father of Alison Parker, the murdered TV reporter, grabbed both issues at once. He said his life's work from now on would be to, quote, "make sure crazy people don't get guns." [Father of Slain Virginia Reporter Vows to ‘Shame Legislators’ into Passing More Gun Control , by AWR Hawkins Breitbart.com, August 27, 2015]

A friend of mine actually did go crazy. We knew it, his poor wife knew it, everyone around him knew it; yet efforts to get the authorities interested were futile. The definition of "crazy," so far as public authorities are concerned, is that you did something seriously, indisputably crazy: burned your house down or…shot someone.

As I said, I have yet to hear any commentator say anything useful about either gun control or the identification and treatment of crazy people. Taking guns away from law-abiding people will just leave criminals with all the guns. Allowing the authorities to define crazy down will end up depriving all nonconformists of their liberties.

I like my liberties, thanks all the same. I'll take my chances with lunatics, including lunatics with guns.

Another point: You might think that what follows trespasses on the edge of bad taste, but it seems to me it's worth noting. It has to be said that from the point of view of the Cold Civil War, the Virginia murders were in all probability instances of friendly fire.

Of course I don't want to see anybody murdered, least of all a comely young woman: slender and blonde, 24 years old. That adds an extra layer of awfulness.

(That it should do so is grossly unfair—I speak as an uncomely geezer male here, and hey, geezer male lives matter!—but it does do so, for deep and sound biological reasons. In what Charles Darwin called "the struggle for life," sperm is cheap, but eggs are expensive. We instinctively value comely young women higher than pock-marked old geezers).

Nevertheless, although I don't know the particular political outlooks of reporter Alison Parker and cameraman Adam Ward, I do have some acquaintance with the staff of local TV stations. They are Goodwhites to a man and a woman. In all likelihood, Vester Lee Flanagan murdered two people whose commitment to the Narrative was as firm as Michelle Obama's.

The same irony was on display in Charleston. Dylann Roof didn't shoot up an Al Sharpton demonstration or a Louis Farrakhan rally. He shot up a room full of harmless old black church people—people Sharpton or Farrakhan would sneer at contemptuously as Uncle Toms.

Friendly fire, see? If Vester Flanagan really wanted to stick it to the white devils, he would have shot Jared Taylor, or Colin Flaherty, or...me.

That would be too rational, though. Lunatics, by definition, are not rational—a fact for which I guess we, certainly I, should be grateful.

As VDARE.com’s Alexander Hart has demonstrated, the key point in Main Stream Media coverage of the Moneta shooting is that this crime goes against the Narrative.

The Narrative, capital "N," is the mental picture of the world cherished by the Goodwhite side in the Cold Civil War against Badwhites. A core component of the Narrative is that Badwhites are full of malice towards blacks, and are always seeking ways to harm them. They lurk around in dark places, nursing their guns—and probably their Bibles, too—just waiting for a black victim to come by.

As Michelle Obama famously expressed it, perfectly in tune with the Narrative: "As a black man, you know, Barack can get shot going to the gas station."[60 Minutes February 2007.] Blacks in general, but especially gentry blacks like Mrs. Obama, are totally, seamlessly in thrall to the Narrative.

This particular article of Goodwhite faith is entirely contrary to reality. I hang out with Badwhite types a lot. I see very little malice towards blacks. What I see far more is the desire not to be forced to mix with them. "Freedom of association!" is the rallying cry. The malice and hatred that I see is directed against Goodwhites—against their arrogance and power and dishonesty.

That's why I call this the Cold Civil War. It's whites hating whites. Nobody much on either side, lunatics like John Brown and Dylann Roof excepted, actually cares much about blacks.

As for wanting to harm blacks: As I and many others have explained, on Department of Justice statistics, blacks are far more dangerous to whites than whites are to blacks. Sample quote from me on this point, calculating from those government statistics:

When it comes to articles of faith, though, reality is not the point. The point is to affirm the Narrative and pronounce anathema on those who dare to dispute it.

The significance of an interracial murder is therefore determined, in the Goodwhite mind, by the race of the victim and the race of the killer. Who is the subject, who the object? Or as Lenin expressed it very pithily, though in a different context: "Who, whom?"

The Charleston church shooting was totally Narrative-compliant: a crazy white guy murdering nine harmless blacks. Gleeful Goodwhites, with the MSM and political establishments in full howling accord, were easily able to leverage it into a campaign to abolish the Confederate Battle Flag, a longstanding goal of theirs. That's the kind of thing you can do with the Narrative wind in your sails.

The Hartford Distributors shooting five years ago, by contrast, when black psycho Omar Thornton murdered eight white co-workers, was counter to the Narrative. So it was not followed by any MSM campaign to ban anything, and the MSM shoved the story down the memory hole as fast as they decently could.

Who, whom? That's what determines the MSM approach and coverage.

Here's an anonymous blogger who goes by the intriguing handle "posttenuretourettes," suggesting he's a retired academic. He doesn't tell us what his academic field was, but he sure knows his Russian literature. Quote from him:

Chekhov has a short story called "A Chameleon," which revolves around an incident where a dog indisputably nipped a man's finger. The actual investigation hinges not so much on what happened, though—but rather on who the dog belongs to. When the policeman at first thinks it's just some mutt, either stray or owned by one of the little people, he threatens to have the owner fined and the dog put down. When, however, it's suggested that the dog belongs to the General, the policeman takes a sudden interest in how exactly the hapless bitten fellow managed to provoke the nice dog. They go through several cycles of this, with the policeman's tone towards the dog/victim changing from menace to endearment, depending on who-whom.

Perhaps Lenin had that story in mind when he asked "Who, whom?"

So it's fair to guess that while the Charleston killings will still be brought up by MSM Goodwhites a year or five years from now as an example of Badwhite depravity, these Virginia killings will be comprehensively forgotten, as the Hartford killings have been.