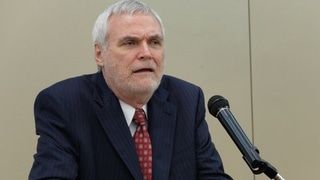 Peter Brimelow writes: One of the bonuses of speaking at the recent American Renaissance Conference was that I got to hear Sam Dickson’s speech “A Benediction For Heretics,” [April 19, 2015] of which this is an extract.

When Martha Stewart’s troubles began, I knew part of the reason was that she was a nobody Polish Catholic from a big family—people who did not have much money; and now she had become prominent. The people that inherit a lot of money, the people that are already King of the Mountain, they do not like newcomers at the banquet of good things. They do not like the idea that someone like Martha Stewart can rise up and become a world figure and become wealthy. And they especially don’t like it when you are a Polish Catholic!

So Martha committed a crime. A lot of people think that Martha’s crime was that she was convicted of insider trading. This is wrong. Martha was never charged with insider trading apparently because the government doubted that it could prove its case.

Martha was indicted for obstruction of justice based largely upon the allegation that she lied to the government officers who questioned her about a telephone call she had gotten from her stockbroker. And, yes, it is indeed a crime to give false information to a policeman.

Now, this is another reason why it is very dangerous for people like us to talk to policemen and FBI agents—certainly outside the presence of a lawyer, and without a lot of careful thught. You can be completely innocent and they can twist it around and make you guilty of giving a false statement to the police. It’s a dangerous thing when police come to call.

I say that as somebody that basically likes most cops. I don’t buy into the “I hate cops” thing. I know there are bad cops—but we need cops. I am sure you have all had the experience, at one time or another, where you were very glad to see a police officer.

But this was Martha’s crime. It was a first offense. Martha did not have a history of lying to the police. It was not a sustained thing. It was a very short thing. She just lied to the cops, once, about a telephone call from her stockbroker.

And Martha served time. Martha served real time. She went to a grim prison. She had dental problems while she was in there. With all of her money, she asked if she could have a dentist fix her teeth. They said no, you are in jail. She suffered permanent tooth damage.

This is what the system did to Martha Stewart, a woman whose lie was a crime but a first offense—in fact, a first offense that didn’t kill or even hurt anyone. But Martha served time.

Now let’s go to Ferguson. In Ferguson, the lowest element of the black community came to the fore. Every race has its trash, of course. Every race also has good people. But in Ferguson, we saw people come out into the streets, eager to be victims and eager to victimize the cop. These people were not Blacks who are a credit to their community. These people were the trash of the Black community.

Now, the truth was that Michael Brown, the Ferguson African American, was acting erratically. He turned around and charged back at the policeman. And about half of the black people in Ferguson who had seen the event stuck to the story they had told when the incident first happened—that the supposed “gentle giant,” Michael Brown, attacked the policeman.

As the Bible says, “the honest man sweareth truthfully to his own hurt.” These people swore truthfully to the hurt of those elements in their community who were providing an opportunity for the poverty pimps.

Jesse Jackson and the others saw another chance to be national celebrities, and receive money, by essentially being poverty pimps, pimping for the trashy troublemaker bottom drawer element of the Black community.. And they deserve to be called pimps because they do nothing for Black people. They just cause Black people to victimize themselves over and over and over again.

Some of these people really were just trash. And what they did was even more remarkable than what Jackson and the other poverty pimps did: This “trash element” changed their story. They changed their story, and claimed Brown had his hands up and was surrendering.

And this was the version spread all over America. Not much later, you had professional football players and everyone else repeating this “Hands Up” slogan—all based on the lie that the cop had wantonly shot this man down dead in the street for no reason at all.

Ferguson is now destroyed. Ferguson is never coming back. Contrary to what the New York Times and Main Stream Media say, about how the community will benefit from voting the White officer holders out and voting the Black ones in, Ferguson is finished. No sensible businessman is going to open a business in Ferguson. Ferguson will be henceforth a terrible slum and the Black people who own houses will have lost their money, because of the behavior of this scum element of their community.

So the worst element of American society lied about these things. They sustained their lies repeatedly for months and that caused problems from coast to coast.

But, when pressed by the federal investigators sent by the African-American Attorney General Eric Holder, most of them finally admitted they didn’t see the “hands up” incident, but instead saw Brown attacking the white cop. One woman even said she saw the attack but thought that it would help “the community” if she said she saw him trying to surrender.

Now are any of these people being indicted? Are any seeing the inside of a grand jury room?

Obviously you know the answer: not one.

The Obama Administration has announced that there will be no prosecutions of the people who, like Martha Stewart, lied to federal investigators and police—but unlike Martha lied over and over again. This…despite the reality that their lies caused the deaths of innocent people thousands of miles away who had nothing to do with the incident whatsoever.

These are people that have destroyed their own community. Who have caused the businesses in their community to be burned to the ground and the people who work there to lose their jobs. People who inflicted, it may be safe to say, tens of millions of dollars in nationwide damage. But they will not go to jail like Martha Stewart—whose lie caused no deaths.

Let’s conclude with this poor little University of Oklahoma SAE fraternity boy who got drunk and made his rude comments. At the most, we can deconstruct them to say he wants to be in a fraternity with his own sort of people. Now, his life is ruined, his family has had to go into hiding. There has been a mob demonstration in front of their house.

This is the society that we live in. Martha Stewart goes to jail for a lie that had little impact. A fraternity member, and his family, have their lives destroyed by a few seconds of video. But people whose lies caused the deaths of policemen and damaged their city, created millions of dollars’ worth of losses, and put the whole country into a frenzy will never serve time.

They like to talk about profiling. Well, it sounds to me like Martha Stewart and that SAE boy were profiled. And those people in Ferguson were not.