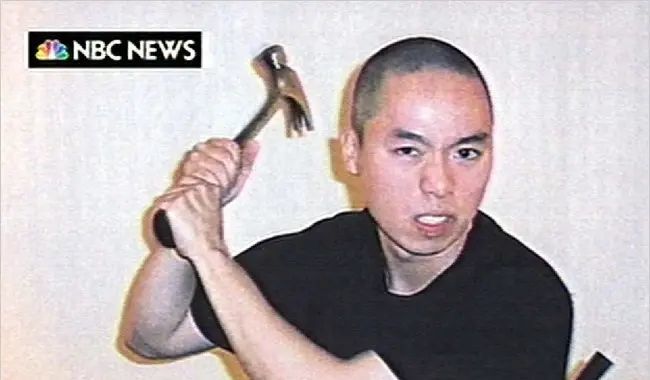 James Bowman has a discussion of the Virginia Tech Massacre, school shootings, and passivity that starts like this:

As we approach the second anniversary of the Virginia Tech massacre by a person who shall be here, as he should be everywhere and forever, nameless, school shootings are in the news again. According to today’s Washington Post, a man in Nevada who is said to have "idolized" the Virginia Tech murderer, has been arrested and charged with sending threatening e-mails to two other Virginia Tech students whose names had been reported as among those who had felt threatened — and in one case, stalked — by the killer. You can imagine their distress. Though police found a cache of weapons in the Nevada man’s parents’ house, where he lived, including many of the same guns used by his hero, he hadn’t actually harmed anyone, and his lawyer argued that the e-mails, which only implied a threat instead of making one directly, had only been his way of "initiating a discussion on causes of school violence.

Boy! You can get away with anything, so long as it initiates a discussion.

I know what he means about not wanting to give the killer publicity. Bowman once gave an address called From Heroes To Herostratus, [April 18, 2001] in which he explained who Herostratus was:

But the last presentation to Calliope in Chaucer’s poem is the case of Herostratus, the man who was said in the chroniclesof Valerius Maximus and John of Salisbury to have burnt the temple of Diana at Ephesus only to become famous. This was an instance, then still so unusual as to seem almost delightfully perverse, of a bad person who wanted to be known for being bad. When the muse asks the man (whom Chaucer does not name) “wherfor didest thou so?” Chaucer has him reply that he wanted to be famous as other people were — “I wolde fayn han had a fame/As other folk hadde in the toun”— even though their fame was owed to their virtues or strength (thewes). It occurred to him that bad people — shrewes, he calls them — had as much fame for their badness or shrewednesse as good people did for their goodness. And since he couldn’t have the one kind of fame, he wouldn’t do without the other, which is why he burned down the temple.

And sith y may not have that oon,

That other nyl y noght forgoon.

And for to gette of Fames hire,

When he asks that his fame be trumpeted to the four winds, the muse answers: “Gladly!” Chaucer may or may not have been able to see it coming away far off in the distance, but it ought to be clear to us at least that we live in a Herostratian age.

But while the media may be encouraging future shooters when it plays along with Seung-Hui Cho's desire for posthumous publicity by putting his video rantings on TV, the problem with not mentioning his name is that sometimes the name is the only clue we get from the MSM that the shooter was a foreigner. You never see a headline that says "Nigerian Gunman", "Arab Gunman," or "Korean Gunman," and sometimes they won't even tell you this inside the story. So unfortunately, the name is the only clue.