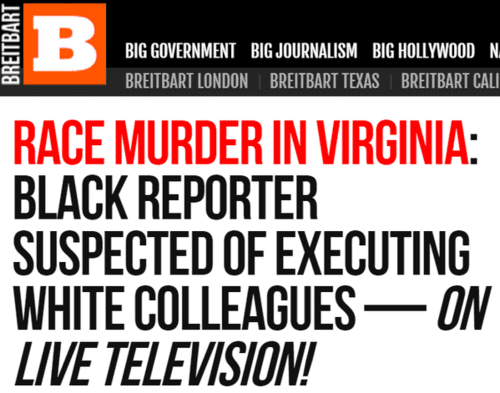 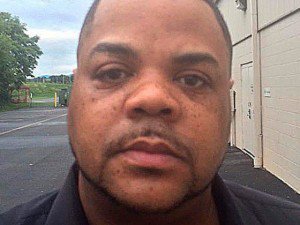 After Dylann Roof shot up Emanuel African Methodist Episcopal Church in Charleston, South Carolina, South Carolina, most Main Stream Media outlets ran similar headlines. Here are a few examples: All, obviously, note the race of suspect and the fact that he shot up a “black church.”

Nonetheless, many on the Left criticized the MSM for not focusing enough on the race of the criminal. For example, black journalist Chauncey Devega [Email him] wrote in Salon:

The headline on the breaking news report about the Charleston shooting was an additional example of how the White Racial Frame dominates news coverage. MSNBC’s screen read “Police searching for 21-year-old suspect.” He was not described as “white”: the American news media is much more likely to racially mark black and brown suspects in crimes, and to include their racial description (or religious/ethnic as in the ubiquitous “Arab” or “Muslim” “terrorist.”

Except for paranoids like Devega, however, everyone recognizes that the MSM systematically suppresses race when the perp is a minority, which is why VDARE.com has a Tag category Not Reporting Race. (Indeed, suppressing race is mandated by the AP Style Book.)

It’s particularly interesting to contrast the coverage of Roof with the MSM Establishment outrage at Breitbart’s coverage of black gunman Vester Flanagan’s murder of white reporters Allison Parker and Lester Ward. Both Dylann Roof and Vester Flanagan explicitly targeted their victims because of their race. Both men released a manifesto based on crime on race. (Curiously, Flanagan’s has not yet been made public). [When Will ABC News Release the Full Vester Flanagan Manifesto?, by J. Christian Adams, PJmedia, August 28, 2015]. Yet when Breitbart posted the—entirely truthful—headline “Race Murder in Virginia: Black Reporter Suspected of Executing White Colleagues on Live Television,” which could have just as easily been an MSM headline about the Charleston shooting if the races were reversed, it provoked a storm of hyperventilating tweets from MSM Big Feet:

Indeed, even conservatives (cuckservatives?) tweeted their concurrence. David Fredosso of the Washington Examiner posted the headline and asked “AYFKM” [Are you f—ing kidding me?]. Ben Howe of Red State signalled that “This goes beyond jumping the shark. What you’re witnessing here is jamming spiked cleats into the brain of the shark.” [Breitbart News Posts Factual Headline About 'Race War' Double Murder Internet Melts Down, Breitbart News, August 27, 2015]

Beyond showing the hypocrisy of the Left and Conservatism Inc. when reporting on racial crimes, this industry-wide outrage at one news website for posting indisputable facts in a headline shows just how far Mainstream Media outlets (including supposedly conservative outlets) are willing to go to enforce an ideological version of political reality.

Or, as Ann Coulter tweeted, "the Truth is racist"

Amazingly, Chauncey Devega’s paranoia is spreading. Many on the Left are doubling down and accusing Breitbart of only caring about race when there are white victims and black shooters. Thus the New Republic proclaimed

There are two ways the conservative website Breitbart covers murders with a racial component, and it depends on the skin color of the suspect and victim. When an admitted white supremacist massacres black churchgoers, Breitbart ignores race as a motivation in the shooting. When a black man kills two white former coworkers, one of whom the shooter claimed made racist remarks, Breitbart reports the shooting is a "race murder.”

Whether it was intentional deception or just journalistic laziness, Foley and Leber ignored Breitbart headlines about Roof like:

Bottom line: Breitbart was consistent in covering the Dylann Roof and Flanagan Shooting. It is the New Republic, Huffington Post etc. who cover “murders with a racial component” depending “on the skin color of the suspect and victim.”

This “connection” led the MSM to deem that the Council inspired Roof’s massacre, convinced cowardly Republicans to return donations from Council members, and Nashville’s Guesthouse Inn to cancel its contract with the Council for its latest conference. Yet the only “connection” between Roof and the Council is that he read the entirely accurate information about interracial crime which it posted on its website. All the Council did, according to the New York Times, was compile “the list of crimes that Mr. Roof’s apparent manifesto cited as a turning point in his descent into racism” [Council of Conservative Citizens Promotes White Primacy, and G.O.P. Ties, by Michael Wines & Lizette Alvarez, June 22, 2015]

After emphasizing that Council merely provided accurate information American Renaissance’s Jared Taylor, a member and sometime spokesman for the Council, asked David Shuster of Al Jazeera: "Do you want us to ignore the truth?" about interracial crime—or lie about it.

Shuster did not dispute that the Council’s information was correct. He just responded that it should "take some responsibility for the stuff that is spewing all over the internet and getting into the minds of the mentally ill and causing them in part to do this" [Dylann Roof and the Council of Conservative Citizens (video), June 22, 2015]

My suggestion: This is a responsibility that the Mainstream Media, which overhypes the extremely rare incidences of white on black crime while utterly ignoring the far more dramatic systematic pattern of black on white crime, should more properly be assuming itself.