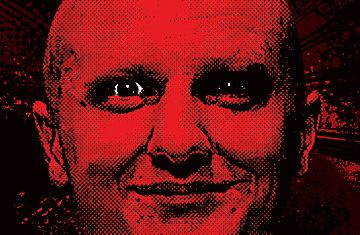 There's been another mass shooting by a crazy person, and liberals still refuse to consider institutionalizing the dangerous mentally ill.

The man who shot up the Washington Navy Yard on Monday, Aaron Alexis, heard voices speaking to him through the walls. He thought people were following him. He believed microwave ovens were sending vibrations through his body. There are also reports that Alexis believed the Obamacare exchanges were ready to go.

Anyone see any bright red flags of paranoid schizophrenia? (Either that, or Obama's NSA is way better than we thought!)

But Alexis couldn't be institutionalized because the left has officially certified the mentally ill as "victims," and once you're a victim, all that matters is that you not be "stigmatized."

But here's the problem: Coddling the mentally ill isn't even helping the mentally ill. Ask the sisters of crazy homeless woman "Billie Boggs" how grateful they were to the ACLU for keeping Boggs living on the streets of New York City. Ask the parents of Aaron Alexis, James Holmes (Aurora, Colo., movie theater shooter), Jared Loughner (Tucson, Ariz., mall shooter) or Seung-Hui Cho (Virginia Tech shooter) how happy they are that their sons weren't institutionalized.

Tellingly, throughout the last three decades, the overall homicide rate has been in free fall, thanks to Republican crime policies, from 10 per 100,000 in 1980 to 4 per 100,00 today. (You might even call them "common sense" crime policies.) But the number of mass shootings has skyrocketed from 4 per year, between 1900 and 1970, to 29 per year since then.

Something seems to have gone horribly wrong right around 1970. What could it be? Was it the introduction of bell-bottoms?

But liberals won't allow the dangerous mentally ill to be committed to institutions against their will. (The threat of commitment is very persuasive in getting disturbed individuals to take their medicine.) Something in liberals' genetic makeup compels them to attack civilization, for example, by defending the right of dangerous psychotics to refuse treatment and then representing them in court after they commit murder.

Liberals won't even agree to take the most basic steps to prevent psychotics from purchasing guns—yes, GUNS!—because to allow the release of mental health information would be "stigmatizing." We're not talking about anorexic girls here. We just need shrinks to tell us if potential gun purchasers are paranoid schizophrenics.

The disastrous consequences of the deinstitutionalization movement is described in E. Fuller Torrey's book, The Insanity Offense: How America's Failure to Treat the Seriously Mentally Ill Endangers Its Citizens. Torrey's book reads like a compendium of America's most heinous murders since the early '70s—all of which could have been stopped with involuntary commitment laws, and none of which could have been stopped even with a complete gun ban.

Here are a few:

Kemper had originally been institutionalized after murdering his grandparents at age 15 because "he tired of their company."

In 1972 and 1973, paranoid schizophrenic Herb Mullin went on a killing spree in California that left 13 dead, including a 72-year-old World War I veteran, a college coed, four teenaged campers and a mother with her two little boys, murdered as they played with marbles.

Mullin killed his victims with a baseball bat, knives, his fists, as well as with guns. How's your "high-capacity" magazine ban going to stop that, Democrats? How would piling on yet more gun control laws have helped the priest whom Herb Mullin beat, kicked and stabbed to death?

What about the elderly boarders that Dorothea Puente—diagnosed with schizophrenia—poisoned and buried in her backyard?

What additional gun restrictions would have helped the group of bicyclists Linda Scates intentionally drove her car into because voices were telling her to "kill the demons"?

In the decades since the deinstitutionalization movement began, more and more people kept being killed as a result of that movement—including the deinstitutionalized themselves. According to Torrey, between 1970 and 2004, the mentally ill were responsible for at least 4,700 murders in California.

Increasing government spending on mental health programs is not going to stop the mentally ill from committing murder. Like liberals, these are people too sick even to know they need help. As Herschel Hardin, whose son was schizophrenic, wrote in the Vancouver Sun: "If you think you are Jesus Christ or an avenging angel, you are not likely to agree that you need to go to the hospital."

Liberals will pretend to have missed the news that the Washington Navy Yard shooter was a paranoid schizophrenic. They refuse to acknowledge that the mass murder problem—as well as the homeless problem—only began after crazy people were thrown out of institutions in the 1970s. They tell us crapping in your pants on a New York City sidewalk is a "civil right." They say that haranguing passersby on the street about your persecution by various movie stars is a form of "free speech."

Only after a mass murder committed by a psychotic with a firearm do liberals spring to life and suggest a solution: Take away everyone's guns.

Taking guns away from the mentally stable only makes us less safe: Even psychotics know enough to keep choosing "Gun-Free Zones" for their mass murders. If Americans are serious about preventing massacres like the ones at the Washington Navy Yard, Newtown, Tucson, Aurora and Virginia Tech, it's time to review our civil commitment laws.

After this latest shooting, will the left finally let us do something about the dangerously mentally ill?