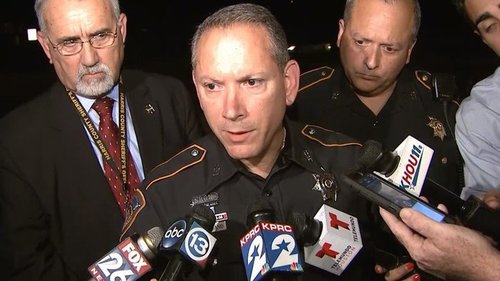 Narrative vs. Reality: Who ACTUALLY Gets Shot Going To The Gas Station

The realities are that, you know, as a black man, you know, Barack can get shot going to the gas station, you know.  [Michelle Obama; 60 Minutes, February 2007.]

Authorities were continuing to hunt for a suspect Saturday in the "execution-style" shooting of a uniformed Texas sheriff's deputy, while warning that "dangerous rhetoric" against law enforcement has "gotten out of control."

A person of interest was voluntarily taken in for questioning early Saturday, and authorities said that he was cooperating but did not provide details about his relationship to the case.

The emotional news conference came after Harris County Sheriff's Deputy Darren H. Goforth, 47, was shot Friday night after coming out of the convenience store of a Houston Chevron gas station.

Goforth had just filled his patrol car when a man "walked up behind him and literally shot him to death," Hickman said at a news conference overnight.

After Goforth fell to the ground, the suspect stood over him and fired several more times.

"It appears to be an unprovoked execution-style killing of a police officer," Hickman said.

But officials continued to plead for help from the public. Hickman said no one had been taken into custody, and asked for any witnesses to the shooting of the loving "father, husband, son and committed law enforcement officer" to come forward.