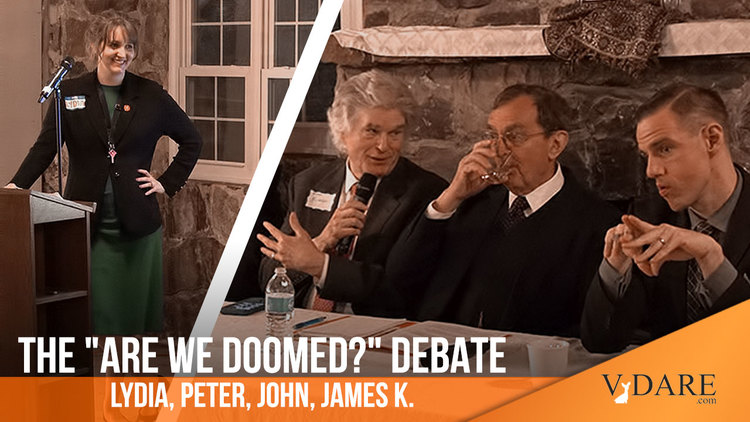 [Videos and transcripts from the first VDARE.com Conference will be posted over the next few days.]

Last week I promised you a report on the first VDARE.com  conference at our castle in beautiful West Virginia, so here it is.

A warning: I'm going to gush. I don't do much gushing here, nor anywhere else. I'm not the gushing type. So indulge me just this once.

I expected to enjoy myself at last weekend's conference, but I didn't expect to come away feeling so charged up. A couple of times during the proceedings I found myself thinking something's happening here. You know that feeling? Like Donald Trump coming down the escalator, or—if you belong in the geezer cohort—the first time you heard the Beatles.

Since coming home from the conference I've been telling my kids that twenty or so years from now, when I shall most likely be pushing up daisies, the VDARE castle in Berkeley Springs will be nationally famous, while Peter and Lydia Brimelow, who are the prime movers in making whatever it is that's happening, happen, will be household names.

That sounds absurdly grandiose, I know, but it was my true feeling on the long drive back to New York—and still now, a week later. I was enthused, and I don't enthuse easily.

Something's happening; and I, a VDARE.com contributor almost from the beginning, have been privileged—if you'll pardon the expression—to be a small part of it.

The castle itself was part of the enthusing experience. It really is a lovely place; but a castle with only half a dozen people in it can't help but seem kind of empty and superfluous. With dozens of conference attendees present, though, milling around cheerfully, eating and drinking, getting to know each other and exchanging shared opinions and experiences, the castle really comes alive.

After dinner Saturday evening we had a debate on the subject: Are We Doomed? The pessimists, arguing that we are doomed, were myself and James Kirkpatrick; the other side, the optimists, were Peter Brimelow and James Fulford. Polling before and after the debate showed no minds changed, with pessimists a 58 percent majority in both polls.

We all agreed, however, that pessimism is no excuse for inaction. As I pointed out, we are all personally doomed to die someday, but we don't take the knowledge of that as a reason to lie down inert until it happens. Dum vivimus, vivamus. That's a Latin dum there, not an English "doom." In Latin, dum means "while." While we live, let's live! So even the pessimists among us are determined to keep fighting.

Sunday morning after breakfast we had talks from Noah Arnold, VDARE's media guy, and Paul Kersey. Paul was as lively and interesting in person as his writing; but with no offense to Paul, it was Noah who really got my attention.

This is a young guy whom I had previously known only as a background techie during our Giving Tuesday livestreams fussing with mikes and cameras. I knew he has impressive technical skills. What I didn't know until Sunday morning was that he is full of interesting and imaginative plans to advance our media presence and promotions. Whatever it is that's happening, Noah will be key to helping make it happen.

So far this fiscal year, which began October 1, agents have caught 158 illegals on the FBI’s Terrorist Watch List.

As a geezer and a bookworm, I don't engage much with the world of art, design, and video. Noah does, and he's buzzing with plans to extend VDARE.com’s reach in those areas, especially video. In the Q&A after his talk I quipped that if, under his inspiration, VDARE starts up a sitcom, I want to play the part of the grumpy old man.

Noah laughed with the others, but I could swear I saw him thinking: Hey, that's not a bad idea…

So, a fun and encouraging weekend. Not the least impressive aspect of it was the high level of organizational competence Peter and Lydia put into it, and the energy and good humor of their staff. It's no small thing to put an event like that together. Spending some time with them behind the scenes there, I saw how hard they were working. To all of them, a big THANK YOU!

Our country, our beloved country, is in a sorry state. Illiterate Third World opportunists are being waved in across our borders by the hundreds of thousands; white race guilt and bizarre theories about human sexuality are destroying our schools and corrupting our children; the justice system has been perverted for political ends; our irresponsible politicians—and, to be fair, also Russia's—are playing games with nuclear fire; and as Asia Times’ David Goldman points out, our country's economy is dependent on imports from China, our declared strategic rival—a situation for which there is no historical precedent [Dependence on China shrinks the US economy in Q1, April 28, 2022].

This great ship, the U.S.A., is listing badly and needs righting. VDARE.com, I do believe, will be a leader in that effort.

April is supposed to be the cruelest month, but in my case proved to be uplifting and enthusing. Onward and upward with VDARE.com!