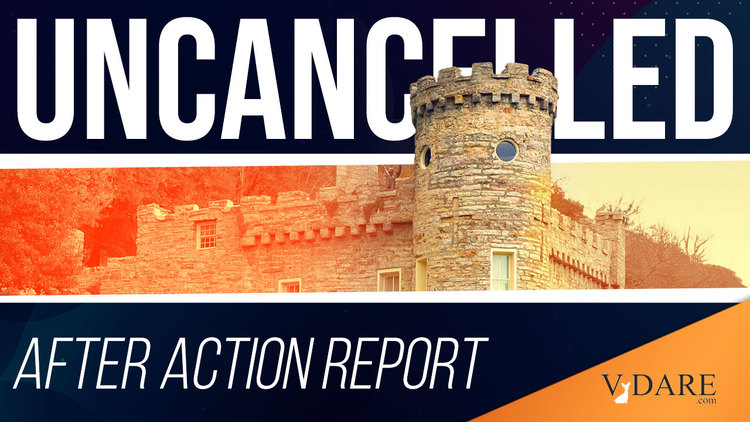 Cyan Quinn at Counter-Currents.com has a report on VDARE.com's first "Uncancelled" conference:

After ten conference cancellations with hotels, VDARE finally hosted their first, UnCancelled conference on April 23. Instead of using the pop-up conference model, where none of the attendees knows the venue until hours before the event, VDARE took a no-nonsense attitude. They put their foot down and bought their own venue — not just any venue, but an honest-to-God 137-year-old stone castle in the small, conservative town of Berkeley Springs, West Virginia.

Perched in the hillside over the state park, the castle is its primary landmark. Despite some minor Internet brouhaha after its purchase in 2020, the town has been very friendly to VDARE and its owners, Peter and Lydia Brimelow. If there were protesters this last weekend, nobody knew about them. VDARE wisely bought not only the castle grounds but also the three houses next to it, the 40 acres behind it, and the land across the highway.

It was rumored that there was an International Day at the state park far below the castle. Theoretically, this was a protest against the conference, but Lydia Brimelow was relaxed about it: “I have no problem with that. That sounds like something I’d take my kids to.” My own husband dropped by Saturday afternoon, and indeed, the “protest” was two ladies in a gazebo wielding sidewalk chalk. This “protest” was said to have been organized by a coffee house that has been screeching about VDARE on Boomerbook for two years. According to the locals, it’s been struggling since it began bringing in drag performers. As it turns out, there’s no existing market for drag shows in West Virginia.

Ms. Quinn had some nice things to say about my own contribution:

James Fulford, managing editor of VDARE, has an incredible talent for tackling even the most serious subjects in an amusing way. Describing his aptly-titled concept of Immigrant Mass Murder, he explained,

It’s not our racism. It’s their racism. They moved here. They felt isolated. They started shooting. It’s the Chechen American dream . . . That’s not the preferable way of doing The American Dream.

Links added by me.

Later she referenced my contribution to the We Are Doomed Debate, which is to say that I've been doomed before—repeatedly:

I thought back to James Fulford’s optimistic attitude concerning our future, which was one of the highlights of the conference: