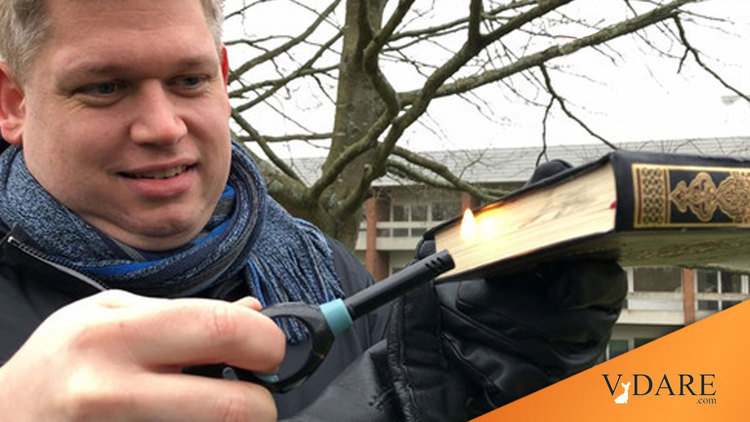 In 2005, Sweden was one of the safest countries in Europe. But by November last year, the leading German newspaper Bild was pointing out that Sweden was now the most dangerous country in Europe, with four times the EU average when it comes to people dying from gunshot wounds [ ‘Sweden is the most dangerous country in Europe,’ writes Germany’s top-selling newspaper, Remix News, November 1, 2021]. Sweden’s major cities are now dominated by warring Muslim gangs, with innocent passers-by falling victim to their turf wars. It thus takes a very brave man to go to the most Muslim-heavy areas of such cities and set fire to the Koran. But this is what a Danish-Swedish politician, Rasmus Paludan, did this month, resulting in serious rioting that has garnered international attention. It’s just more evidence that immigration-imported Diversity Is Strength.

Paludan is the 40-year-old leader of the minor Danish political party Stram Kurs (“Hard Line”) which narrowly missed out on gaining seats in the Danish parliament in the country’s 2019 election. It obtained 1.8 percent of the vote, just short of 2 percent threshold required to enter parliament. Paludan’s father is Swedish and he himself lived in Sweden several times during his childhood [Dozens arrested at Sweden riots sparked by planned Quran burnings, BBC News, April 18, 2022]. However, as I have reported before, both Wokeness and Islamic violence are far worse in Sweden than in Denmark.

In August 2020, Paludan declared that he would come to Sweden and burn the Koran. He was promptly banned from entering the country in order to avoid disorder. So his supporters burned the Koran in the Muslim-heavy city of Malmö. The result: a riot by “well over 300” Muslims who burned tires, threw rocks and blocks of concrete at the police, and smashed bus shelters [Riots erupt in Malmö after far-right activists burn Koran, by AFP, The Local, August 29, 2020].

In April 2022, Paludan was allowed to enter the country, because he had obtained Swedish citizenship by descent. He applied to hold his protests in city centers. Some police forces banned them due to fear of disorder, some moved them to areas outside the center and some simply allowed them in [Koran burning and riots in Sweden—the day after, by M. Apelblat, Brussels Times, April 21, 2022]. On April 14, Paludan attempted to give a speech in town square of Jonkoping, in the center of the country, but was drowned out by a Leftist Lutheran priest ringing a bell [Dozens arrested at Sweden riots sparked by planned Quran burnings, BBC News, April 18, 2022].

On April 15, the Easter weekend that also coincided with Ramadan, Paludan planned to burn the Koran in the immigrant-heavy city of Linkoping in the south of the country. He had to be surrounded by police protection to do this, with a violent crowd of about two hundred demanding that the police stop him. There were scuffles and the police were pelted with stones, compelling them to close off the area to the public [Danish far-right party leader burns Holy Quran under police protection in Sweden, by Atila Altuntas, AA, April 15, 2022]. Three police officers were injured in the rioting and the windows of police cars were smashed. Amid the riot, Paludan didn’t manage to perform his burning [Sweden: three police hurt in riot before demo where Qur’an was to be burned, AFP, The Guardian, April 14, 2022].

He was more successful the next day in the immigrant-heavy Stockholm suburb of Rinkeby where, on Good Friday and again surrounded by the police, he did indeed manage to set the Koran aflame. Even before he did so, there were Muslim riots in Orebro, about two and a half hours away, in which a police van was set on fire and rocks were thrown at the police. After Paludan burned the Koran in Rinkeby, violence also broke out there.

The next day, the Paludan Koran Burning Circus moved to Malmö, having previously been scheduled to be in Landskrona—where there was, as a result, serious disorder. About one hundred people threw stones, set fire to cars, tires and dustbins and even erected a barrier fence to stop traffic.

In Malmö, Paludan was hit in the leg by a stone before he could torch the Koran and the police repelled the rioters with pepper spray [Third night of unrest in Sweden over far-right anti-Islam rally, Associated Press, The Guardian, April 17, 2022].

This rioting spread and by the end of the day a school in Rosengard had been set on fire by a Muslim gang. The Swedish police actually seemed almost sympathetic to Paludan and his supporters, telling reporters that “the main target for the rioters was Swedish police and society, not Paludan.” The Swedish Justice Minister, Morgan Johansson, also defended the police’s use of force: "When you end up in these critical and aggressive situations, there's nothing else police officers can do but to put up a hard fight,” he said. “We cannot accept that perpetrators commit this type of violence” [Sweden links riots to criminal gangs that target police, Associated Press, NPR, April 18, 2022].

By Easter Monday, twenty-six police officers and fourteen members of the public had been injured in the riots and twenty vehicles had been damaged or destroyed. Sweden’s chief of police, Anders Norberg, declared that he had “never seen” riots as violent as those which had taken place in Linkoping [Dozens arrested at Sweden riots sparked by planned Quran burnings, BBC News, April 18, 2022].

News of what had happened spread to the Islamic world resulting in a protest in front of the Swedish Embassy in Tehran, the Iranian capital, in which protestors chanted “Death to America” and “Death to Israel” [Sweden links riots to criminal gangs that target police, Associated Press, NPR, April 18, 2022].

But surprisingly, considering how Woke Sweden is, it appears that violence—in this, until very recently, calm society—is more unacceptable than Paludan’s provocation.

“The events in Malmö during Easter are completely unacceptable and the police won’t give way for this type of action,” Jimmy Modin, spokesperson for Sweden’s Southern Police Region, was quoted as saying. “We don’t tolerate the violence which occurred and are investigating the events to prosecute the perpetrators.”

Modin further explained that to organize a demonstration in a public place requires a permit from the police, but “It´s allowed, within the framework of freedom of expression, to express opinions and to do things that can be provocative and arouse feelings to generate debate.” “The requirements for refusing permits are high,” he told an interviewer. “The police are not giving a permit to anyone’s opinions but to the right to express them. It intervenes only if a crime against Swedish law is committed in connection with a public meeting or demonstration” [Koran burning and riots in Sweden—the day after, by M. Apelblat, Brussels Times, April 21, 2022].

Even the Leftist Justice Minister, Social Democrat Morgan Johansson, insisted that Paludan must have the right to protest, even if he questioned his motives for so doing, due to the disorder it causes in Sweden. “He seems for some reason to hate Sweden and try to harm Sweden. I do not understand why,” he told a Swedish newspaper [Sweden suspects ‘foreign actors’ behind riots over Quran burning, Al Jazeera, April 20, 2022].

Social Democrat Johansson eloquently expresses the helplessness of the Swedish Woke elite. They want their quiet, calm society in which you had the freedom to protest, but they also want Muslim immigration so that they can use it as a means of virtue-signaling their way to power, importing a block vote and attacking ordinary Swedes, whom they despise for their lack of culture.

They justify this by convincing themselves that they love the marginalized, who are kind, decent people. Of course, these Muslim immigrants are clearly violent. But the Swedish elite can hardly admit that even to themselves because that would be to admit their own hypocrisy and moral corruption.

Paludan’s brutal stunts are merely confronting them with what they are. He has forced them to admit failure, but they appear genuinely to have no idea what to do next [Sweden’s failed integration creates ‘parallel societies’, says PM after riots, by Jon Henley, The Guardian, April 28, 2002]