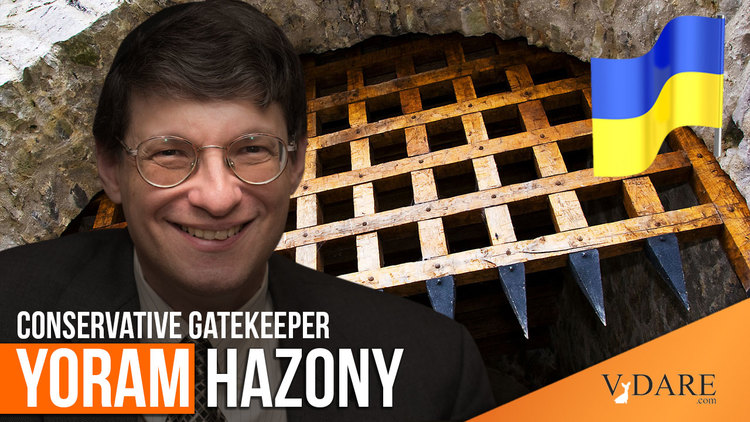 Earlier by Peter Brimelow: “East is East And West is West”: What The Hazony/Brog Heresy Hunt Says About July’s “National Conservative Conference”

Israeli Yoram Hazony’s latest National Conservativism Conference  aka  the “Gatekeepers Ball” was held in Brussels last week amid the ongoing war in Ukraine. Hazony and his speakers delivered a clear message about what they think National Conservatism should mean. No, it’s not combatting mass immigration or demographic replacement. It’s just hating Russia and fortifying the Globalist American Empire. It’s a complete and utter fraud.

One look at the conference schedule should give you an idea of how out of touch the conference was. The majority of panels and speeches focused on Russia and “national security.” Here are some examples of the priorities of these “NatCon” speakers:

This obsessive focus on Russia was too much for some of the other speakers. American Conservative columnist (and VDARE-com disavower) Rod Dreher, certainly no fan of Russia, expressed his frustration in his conference postscript:

[I]t was boring to hear over and over how horrible Russia is, and how terrible this [war] is…

…I heard complaints from conference attendees that it is almost impossible to dissent from anti-Russian maximalism, even in national conservative circles. In mid-afternoon, NatCon guru Yoram Hazony mentioned in his talk from the stage that it ought to be possible to be both against Russia and against expanding the war. He’s right, and it was encouraging to hear this sentiment voiced. The fact that it seemed a bit risky to say lets you know how fierce the anti-Russian opinion is among this crowd.

Another observer of the conference shared a similar assessment. British “post-liberal” journalist Sebastian Milbank wrote that Russia appeared as the “foe of the National Conservatives” and was the central unifying theme of the conference. He also noted that Hazony, in his usual zeal for gatekeeping, sought to exclude pro-Russian voices:

One of the strange aspects to the conference thus far, and unlike (I believe) previous years, was the continual emphasis on NATO (whose headquarters are only four miles down the road). The second panel on the nation state, and the third focusing on responding to the threat of China, might have been pulled from any center right event across the West.

In a heartfelt keynote address, Yoram Hazony, the Israeli guru of National Conservatism, pleaded for higher NATO spending, and a conscious uncoupling between China and the West, as well as implacable opposition to Russia. This was his theme and, it rather felt like, the line of every speaker before him for that matter. More interestingly he argued that it had always been the policy of the conference to exclude figures supportive of Russia and China’s regimes. But he said, sometimes they had “made mistakes.”

[Who are the National Conservatives?, by Sebastian Milbank, The Critic, March 24, 2022]

That may explain the disappearance of French nationalist Marion Maréchal Le Pen from this year’s event. The niece of Marine Le Pen is known for being sympathetic to Russia [French far-right figure Marion Marechal to visit Crimea, Agence France-Presse, April 4, 2019]. She also forthrightly talks about the dangers of demographic replacement, an issue Hazony and Co. clearly do not want to discuss [Le Pen’s niece reportedly joins far-right rival Zemmour, by Jules Darmanin, Politico, March 3, 2022]. Milbank says she was slated to speak (and had spoken at the 2020 NatCon conference) but was curiously excised from the event. There was no explanation given for her absence.

Along with Russia sympathizers, the NatCon conference was bereft of any discussions of the demographic question and hardly any mention of immigration. There were a few speakers who criticized multiculturalism, but they made sure these comments were harmless and within the perimeters set by Conservatism Inc. There was much talk about Europe and European values, but little focus paid to the historic European people. According to the conference, Europe is defined by its laws and institutions, not by its people.

Hazony has been very clear that he wants his nationalism free of any hint of “racism.” When he barred real nationalists (such as VDARE.com’s Peter Brimelow and American Renaissance’s Jared Taylor) from his 2019 conference, he declared that those who tie race to nationality have no place within his neutered National Conservatism. Here is some of what he tweeted at the time:

What separates us is my view that the American nation--an actual people with a particular cultural inheritance, bound by ties of mutual loyalty--is a far greater and better thing than the bogus, pseudo-scientific construct that the race nerds hope to replace it with.

He also claimed that Israel—the land to which he owes primary allegiance—was not an ethnostate:

We Jews are a nation, not a race. Anyone who is loyal to the Jewish people, its God and tradition, can go to a rabbinic court and become a Jew. That offer is open, and has been open to people of different races, since biblical times.

As Brimelow pointed out nearly three years ago, that opinion is utter hogwash.

David Brog—the executive director of the sponsoring Edmund Burke Foundation, who declines to say if he is also an Israeli dual citizen—echoed Hazony’s points in a 2019 about the compatibility of race with their respectable nationalism:

In America, any effort to build a nationalism grounded in race will be crushed by the weight of our diversity and overwhelmed by the power of our ideas. While there have been great sins and shortcomings along the way, our leaders set us on a path that guaranteed that our American identity would eventually transcend blood and clan.

[Towards an American nationalism, by David Brog, Spectator, July 1, 2019]

Or, as podcaster Scott Greer put it:

Yoram Hazony’s nationalism: America isn’t an Idea, it’s an Anglo American Idea—and anyone who insists that Anglo Americans have a distinct role in thinking it has no place in our movement

This is the same tripe National Review has been spewing for years. National Conservatism fails to demonstrate its fundamental differences from Conservatism Inc.

Hazony has only doubled down on his anti-racialism attitude since then. In 2020, he strongly condemned the scientific study of racial differences, claiming it’s a “disaster” and helps the Left. His tweets seemed to imply that the Left is justified in banning the study of this topic.

You can't get to viewpoint diversity in academia by defending the "study of race differences in intelligence."

Such studies are potentially interesting to political racialists and white identitarians.

But most conservatives don't see much value in them. https://t.co/r7GArV2r8U

Liberal: I can’t stand the way the Left has brought race into every corner of academia.

Leftist: Oh? What would you do differently?

Liberal: I would support the new improved science of race differences. I think we could do that really well.

The return of race science to respectability in some academic circles is supposed to show how open-minded they are.

In fact it’s been a disaster for academia, fueling hatred for science and putting a weapon in the hands of the social justice censors.

Just awful in every way. https://t.co/N1VFR3btYD

No, that’s not the issue here. It’s straight political theory:

A nation is not a race.

Steve Sailer noted in his review of Hazony’s book The Virtue of Nationalism that the author seemed remarkably unconcerned with immigration. This civilizational issue received scant attention in a book about nationalism. That should tell you a lot about Hazony.

The latest conference evinces Hazony’s real purpose. He wants to direct nationalism toward hating Russia rather than focusing on the real threat. The bad news is that it seems to be drawing in a wide range of luminaries. The Brussels conference hosted the Prime Minister of Poland, the Prime Minister of Slovenia, a Ukrainian ambassador, and several elected lawmakers in Europe. Most of them seemed to think they were at an anti-Russian rally, based on their speeches.

But there is a positive note to all this. For one, these conferences don’t generate that much press attention anymore. The two articles cited here were pretty much the extent of media attention given to the conference. The last NatCon conference in America, which took place last October, suffered poor attendance and middling attention, according to sources who were there.

The bigger whitepill from this: Hazony does not set the tone for nationalist discourse. The person who does is Tucker Carlson—a keynote speaker at the first National Conservatism conference, also curiously absent from this most recent event.

Unlike Hazony, Carlson doesn’t see Ukraine as our central problem. He wants the political elite to focus on America First. And he sees the National Question as the core issue of our time.

What Tucker says matters more than what Yoram says. Carlson is the future of the American Right, Hazony is the past.