"White Privilege": One Of The Stupidest Ideas Of Our Time

The subject of "white privilege" has turned up many times at VDARE.com, most recently in a blog entry by James Kirkpatrick.  A prominent propagator of this trope is Peggy McIntosh,associate director of a grievance-studies institute at Wellesley College. 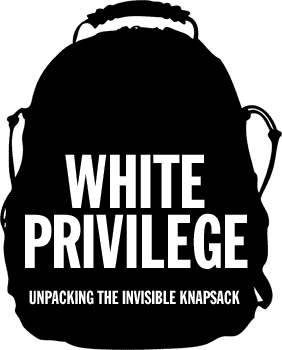 In the late 1980s, McIntosh [Email her] listed 50 "Daily Effects of White Privilege" in her well-known article, White Privilege: Unpacking the Invisible Knapsack [PDF].  My "favorite" (urp) among her examples is #46: "I can choose blemish cover or bandages in 'flesh' color and have them more or less match my skin"—surely a searing indictment of our heartless capitalist market economy (presumably a very "white" thing, itself).

In early 2012, the local elites (snort!) in Duluth, Minnesota and adjacent Superior, Wisconsin launched a crusade against white privilege in their very white "Twin Ports" metro area.  (Duluth was 90% white in 2010, and Superior was 91.5% white.)  This was the Un-Fair Campaign, sponsored by entities that included the University of Minnesota-Duluth, the YWCA, Duluth's city government, and the University of Wisconsin-Superior.

The campaign produced by these and other mooncalves of the Twin Ports establishment was made prominent by billboards showing photos of white faces with overlying handwriting (above and below) saying things such as "We [i.e. white people] don't experience the daily disadvantages—the looks, the fear, the hassles—that thrive in the unspoken world of WHITE ENTITLEMENT."  (Capitalization as in the original.) 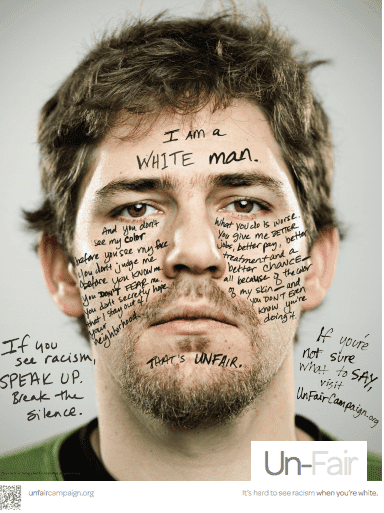 After its initiation in late January of 2012, the Un-Fair Campaign was the focus of controversy in the Twin Ports for more than a year.  The Duluth News-Tribune's coverage is archived here.

The campaign's still-extant website   instructs us on the basics:

White Privilege — White privilege is a set of advantages that are given to people who are part of the majority and dominant group. These opportunities and privileges are often invisible. [Campaign Year In Review (PDF)]

I learned about the Un-Fair Campaign from a February 5, 2012 entry at Lawrence Auster's View From the Right blogsite.  As gateway city to the Quetico-Superior canoe-country wilderness, Duluth has long been close to my heart, so I was especially interested.  And since I had a straightforward argument (one I'd never seen in print) against charges of "white privilege," I emailed the following letter to the News-Tribune on that February 9:

There's a contradiction at the core of the Un-Fair campaign's condemnation of "white privilege" in Duluth: The city was settled and built by a population that, over the generations, was overwhelmingly white.  So naturally, it suits them—they built it for themselves.

Is such a white society less suitable for people of other races?  It may well be.  After all, for decades white communities have been hectored to welcome "diversity" and reap all its benefits.  But if racial diversity is to yield benefits, people of different races must be, on average, systematically different.  And those systematic differences must be in temperament, intelligence, and/or physical capabilities, not just in the trivial category of skin color.  Else how could diversity make a difference, either beneficial or detrimental?

Further, such systematic differences would likely imply that non-whites don't fit in perfectly to a society established by whites.  So if those familiar claims about diversity are well founded, then complaining that white people unconsciously enjoy "unearned privilege" simply amounts to excoriating whites for being themselves and living their lives.  (Similarly, the Japanese living in Japan could be condemned for possessing "unearned yellow privilege.")

Thus there's another contradiction here: Why would non-whites, presumably aiming to improve their circumstances by moving to a community created by whites, then complain about their new environs?  Instead, they should rejuvenate a seemingly-forgotten tradition from America's not-so-distant past: Assimilate!

Within a day of the letter's submission, a staffer at the paper telephoned to confirm that I'd written it, a typical practice.  So I expected my letter to appear shortly, especially since I knew that another Auster reader had also submitted a letter to the News-Tribune, and—in contrast—he hadn't been contacted.

Thus I'd be contributing to the public conversation.  But my letter never did appear, so after several weeks of waiting I emailed the paper to ask why.  Editorial-page editor Chuck Frederick [Email him] promptly replied, and part of his explanation was that "After closer analysis, we were concerned by several statements in the letter that could potentially be perceived as offensive."

Translation: The Duluth News-Tribune is run by geldings, afraid of publishing a reasoned, calmly-stated letter making a significant, apparently-overlooked point.  Their reflexive reaction to something having to do with race—even something so straightforward—was a preemptive cringe.  Such is the mentality of the gatekeepers of the public conversation in 21st-century America.

Back to Peggy McIntosh, whom a News-Tribune reporter had quoted as an authority in that first article about the Un-Fair Campaign.  Item #5 in her catalog of white privileges is:

I can go shopping alone most of the time, pretty well assured that I will not be followed or harassed.

So I turn again to Thomas Sowell, this time to quote from The Day Cornell Died (Hoover Institution, October 30, 1999), an article recalling 1969's "guns-on-campus crisis" instigated by "black militants" at the university, while Sowell was on the economics faculty there.   Commenting on a book about the crisis by University of Wisconsin professor Donald Alexander Downs (who'd been a student at Cornell in 1969), Sowell wrote:

It never seems to occur to Downs that how people conduct themselves has something to do with how others react to them. This applies across the racial lines. One of my white colleagues who had a somewhat hippie look complained to me that he was treated rudely in a certain clothing store in Ithaca—a store where they were all but obsequious to me when I came in wearing my only Hart, Schaeffner & Marx suit.

It would seem like a good bet that neither of these ideas—Sowell's about behavior and mine about the nexus between "diversity" and claimed "white privilege"—have ever penetrated the minds of Peggy McIntosh, newspaper editors in Duluth, or most other harpies of the Left.