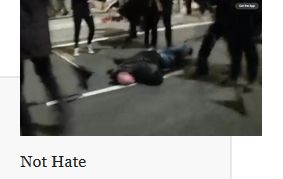 From the New York Times’ This Week in Hate column:

Valerie Grim discovered flyers from a white nationalist group posted outside her office at Indiana University in Bloomington.

This Week in Hate highlights hate crimes and harassment around the country since the election of President Trump.

Growing up in Mississippi in the 1960s, Prof. Valerie Grim was only too familiar with racism. So when she discovered flyers from a white nationalist group posted outside her office at Indiana University Bloomington, she wasn’t intimidated.

Instead, she was curious about what had led someone to post flyers depicting Michelangelo’s David along with the phrase “Let’s become great again” and the name of Identity Evropa, a white nationalist group, outside offices in the university’s department of African-American and African diaspora studies. The group’s name, symbol and Twitter handle were also written on the whiteboard on Prof. Grim’s door.

“This is someone who really got a wrong view of history,” says Professor Grim, who teaches African-American history. 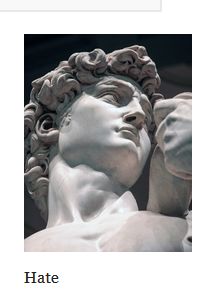 The NYT’s This Week in Hate column has still not deigned to cover the beatings of dissidents in Berkeley by masked blackshirts.

But the distribution of flyers featuring the greatest work of art by a single artist demands massive coverage.

The city of Florence should dress David from head to toe in black, including a mask, so he would stop being such a Symbol of Hate.