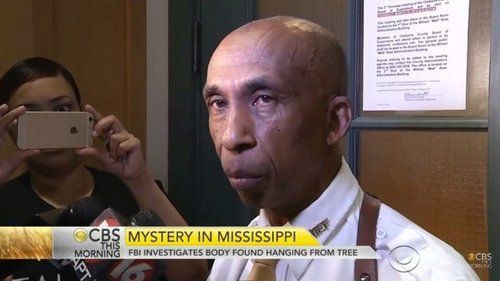 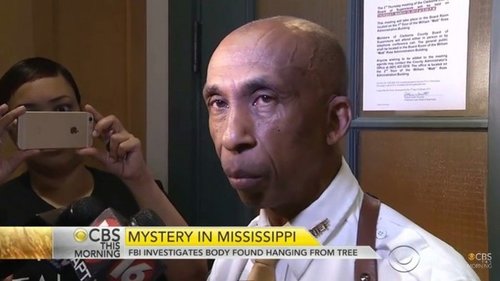 Above, Sheriff Marvin Lucas, the "Mississippi Sheriff" investigating the hanging  death. The Claiborne County he replaced, Sheriff Frank Davis, who served for 40 years was also black. It turns out that it's not 1965.

This week, the NAACP made national front-page headlines with a local press release demanding that the feds investigate the hanging death of a local man in Port Gibson, Miss. Derrick Johnson, president of the NAACP Mississippi State Conference, immediately invoked the specter of a "hate crime." In response, the Obama Justice Department flooded the zone with a whopping 30 federal agents.

News outlets grabbed the bait. USA Today asked ominously: "Was it a lynching?" The discovery of ex-con Otis Byrd's body swinging from a tree by a bed sheet "brought back unpleasant memories of America's violent, racially charged past," the paper's video reporter asserted. Voice of America similarly intoned: "Mississippi hanging death raises lynching specter." The Los Angeles Times leaped into the fray with: "Why this story haunts the nation."

Whoa there, teeth-gnashing Nellies. Didn't we just recently witness the implosion of an NAACP-incited non-hate crime with the same exact narrative? Why, yes. Yes, we did.

But the allegedly racist perpetrator of the "NAACP bombing" turned out to be a disgruntled client of a now-deceased tax accountant who once worked in the same office complex. The financially troubled suspect had unsuccessfully tried to contact the tax preparer for years to obtain past tax returns.[NOT A Hate Crime: Colorado Springs Bombing Targeted Tax Preparer, Not NAACP, By Chuck Ross, The Daily Caller, February 20, 2015] But unbeknownst to the "bomber," who set off a pathetic improvised explosive device on the opposite side of the NAACP office, the accountant had been sent to prison for bilking other clients—and had passed away several years ago.

Confirming what only a few of us in the media dared to theorize out loud, race had absolutely nothing to do with the wildly inflated and cynically exploited incident in Colorado Springs. Zip, zero, nada.

None of this appears to have chastened the journalists who reflexively empower the NAACP agitators who reflexively cry racism. Just weeks after the not-NAACP bombing, here they are stoking fears of a probably-not-racist-not-lynching. Despite law enforcement reports that Byrd's hands were unbound, despite warnings from the local sheriff (who happens to be black) not to jump to conclusions, and despite the very real possibility that Byrd committed suicide, the papers and airwaves disseminated Blame Whitey and Blame Righty talking points without thinking twice.

The incident indeed "brought back memories" for me—memories of the embarrassing 1996 media malpractice of former USA Today reporter Gary Fields, who manufactured a purported epidemic of racist church-burnings in the South with 61 hysterical stories. A typical and familiar headline: "Arson at Black Churches Echoes Bigotry of Past."  The NAACP jumped onboard and demanded that then-Attorney General Janet Reno investigate. President Clinton fanned the flames; panels were formed; federal spending programs were passed. But a year later, Fields' own paper was forced to admit that "analysis of the 64 fires since 1995 shows only four can be conclusively shown to be racially motivated."

Same old, same old. Then, as now, for publicity and profit, the race hustlers stoke the very societal divisiveness they claim to abhor—and knee-jerk journalists suffering institutional amnesia aid and abet them.