A friend does a little focus-grouping now and then of political language.

He reports that any concern for the rights, interests, or well-being of “whites” strikes respondents as downscale.

In contrast, the idea of “European” identity seems kind of classy to the Americans he tries it out upon

But one roadblock to the growth of “European” identity in the U.S. has been that the federal government includes a lot of non-European peoples in its official definition of “white:”

A person having origins in any of the original peoples of Europe, the Middle East, or North Africa.

Jared Taylor has long campaigned in his gentlemanly fashion to nurture a white identify politics to defend the interests of white people the way Jesse Jackson and Al Sharpton noncontroversially lead a black identity politics movement. But he has had a slow time getting many to take his concept seriously.

Taylor has adopted classy symbols such as the great German Romantic painter Caspar David Friedrich’s painting Wanderer Above a Sea of Fog.

But that’s like baling out the Pacific Ocean with a tea cup after endless media denunciations of anybody taking pride in their white heritage or feeling solidarity with other white people as obviously a gap-toothed, hateful moron.

Anybody self-identifying as “white” seems kind of pathetic or low-brow.

On the other hand, “European” sounds pretty classy. 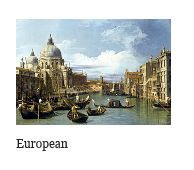 But at present, lots of white Americans don’t have roots in Europe.

However, the Obama Administration may be on the way to solving that problem for the nascent European Identity movement in America by pandering to the Flight from White.

The lame duck administration appears to be getting ready to break out “Middle Eastern or North African” as a separate racial category different from “whites,” thus making “European” an official category in federal racial reports.

(This separation of MENA’s from whites hasn’t happened yet, but the Obama Administration has given a lot of hints that it will likely do this unless anybody objects.)

The new MENA category would facilitate complaining about “everything being run by old white men,” as the Washington Post article makes clear:

Maz Jobrani, an Iranian American actor and comedian who made a video trying to persuade people to write in “Iranian” for the 2010 Census, said that while he supports the new category, other Iranians might perceive it as a slight.

“Some Iranians are very Iranocentric; they really want it to be known that they are separate from Arabs, and when you’re talking about race, Iranians are quick to remind you that Iranians are white,” he said. “But I think it’s good to have some kind of minority status, and if that means that we’ve got to get together with others from the same region, I think there’s some good that can come of that.”

If a MENA box does appear on the next census, it may take time for communities to embrace it, Jobrani added.

“When you first come here to America, you are kind of a third-class citizen. People have a tendency to put their heads down and not make any noise and just get through their daily lives,” he said. “But then you have their children who grow up here and say, ‘How can I sit back and complain about everything being run by old white men if I don’t get involved?’ It’s realizing that your voice counts.”

And that’s the American Establishment’s highest priority these days: encouraging newcomers to “complain about everything being run by old white men.”

After all, there’s nothing more unfashionable than being called white.

The federal government’s definitions of race tend to have a lot of influence because they determine how statistics are collected, which then make some paths easier to think about than others. If the government changes the rules for who is eligible for money and prizes, everybody winds up playing along. For example, in the 1970s, East Asian immigrant businessmen were known as Orientals and thus eligible for some lucrative preferences in government contracting and low interest loans under the concept of Minority Business Development. In contrast, South Asian immigrant businessmen were classified as white or Caucasian and thus didn’t get any minority goodies. So, the South Asians complained until they got kicked out of the profitless white category and grouped with the Orientals in the new Asian category.

Genetically, South Asians tend to be somewhat closer to Europeans than they are to, say, Chinese, but who cares about science when being officially nonwhite is worth real money?

And this pan-Mediterranean definition of whites (or, as they used to be known in official terminology, “Caucasians”) reflected not just anthropological science but general American impressions. In a pre-diversity America focused on whites, blacks, and American Indians, Lebanese were definitely in the general white bucket.

Danny Thomas, born Amos Muzyad Yakhoob Kairouz in Michigan in 1912 to Lebanese Maronite Catholics, was a huge TV star in the 1950s and an admired philanthropist who founded the St. Jude Children’s Research Hospital. He was the first gentile to become a member of Hillcrest Country Club in Los Angeles and the PGA held the Danny Thomas Memphis Classic golf tournament from 1970-1984. His daughter Marlo Thomas succeeded him as a TV star.

Everybody loved this guy. Going to a Catholic school in the San Fernando Valley in the 1960s, Danny Thomas was seen as a great Catholic American.

But Lebanon’s in Asia.

For purposes of keeping old data that didn’t break out “MENA” relevant, the new MENA category would likely make the MENA category and the new rump category of European whites add up to the old, broader definition of whites. The Obama Administration says:

This would address potential inconsistencies across data collections where data describing a Middle Eastern or North African group could be reported separately for detailed analyses (for example, where sample size permits), but otherwise could be aggregated into the “White” reporting category to facilitate comparability across information collections that would not have large enough samples to permit separate, detailed reporting.

In other words, the feds will need to keep the word “whites” to keep relevant all the earlier data collected when Middle Easterners and North Africans were lumped in with Europeans. So in the future, “whites” will continue to exist for the federal government as supercategory of MENA plus Europeans.

Going forward, the existence of a MENA implies another category, which would naturally be called “Europeans” or “European-Americans.”

One detail that’s up in the air at present in the federal plans is whether Armenians and Georgians from Asia just south of the European border in the Caucasus would be included in the MENA grouping. The Washington Post reports:

I think the issue is that Turkey is partly European in territory and the US officially supports Turkey’s accession to the European Union. That then raises the question of what to do with Asian countries beyond Turkey like Armenia and Georgia that are outposts of Christendom.

For example, here is my Los Angeles city councilman, Paul Krekorian, a third generation San Fernando Valley resident who looks a little bit like me, although he appears to shave more regularly.

Krekorian makes a big deal about being Armenian, although his Wikipedia page leaves it ambiguous whether or not his mother was also Armenian.

(I’d say that, like a lot of successful politicians, he looks a little Irish, but I’m just guessing.) When Deukmejian defeated L.A. mayor Tom Bradley for governor in 1982 and 1986, it was always seen as the white guy versus the black guy.

But, Armenia is not, technically, in Europe. It lies in Asia.

And there are big advantages to being reclassified as non-white.

But all that are just details.

Perhaps after the Obama Lame Duck Administration announces the MENA category, the non-MENA among the old whites will start using a more stylish new term like “European-American” to push for their interests.

Once the federal government swings its power behind the “European-American” monicker, then European-American Identity groups will have a much easier time of agreeing upon who is in and who is out of their group: the feds are validating Europeanism for them.

This will raise questions for the single most influential group in public discourse, Ashkenazi Jews. Are they Europeans or are they MENAs? The feds have suggested that Israeli Jewish immigrants will be expected to self-identify as MENAs, but there has been no hint about Ashkenazis, who have typically been in Europe for a couple of thousand years and are, according to recent genome studies, on average slightly more European than MENA by descent. But would self-identifying as Europeans be seen as invalidating their claim to the Holy Land in the Middle East?

Keep in mind that federal race and ethnicity categories work by self-identification. For example, the President of the United States identified himself on the 2010 Census as 100% black, despite being 50% white.

Jared Taylor very much wants Jews within his identity politics movement. As a certain immigrant media tycoon once remarked to a friend of mind in explaining why he subsidized neoconservative spokesmen, “To succeed in America, don’t need all the Jews in New York on your side, but you do need some.”

A European-American identity movement with heavy Jewish leadership might become an accepted player on the identity politics scene. On the other hand, if Ashkenazis overwhelmingly choose to go the MENA route as part of the general Flight from White, anti-Europeanism would likely become a default public prejudice of ambitious Americans.

The future is unwritten. The Obama Administration appears likely to make it more interesting.