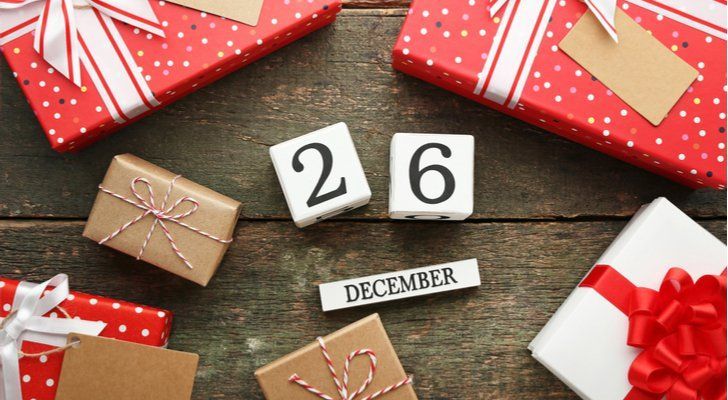 Boxing Day: If We're Going To Import Foreign Holidays, Why Not Import A British/Canadian One, And Give Americans A Day Off! [2020 UPDATE]

James Fulford writes: Christmas Day is still a Federal holiday, and Donald Trump has made Christmas Eve a holiday (this year) for Federal employees. Britain's traditional December 26 holiday of Boxing Day  (also celebrated in Canada and Australia) has not caught on, perhaps because Americans are traditionaly such hard workers. Mark Steyn, born in Canada and educated in England, points out that it's hard to make Americans take off the days that they're entitled to.

In rural states, most Federal holidays—Presidents Day, Martin Luther King Day, etc—go unobserved except by banks and government agencies. It's all I can do to persuade my assistant not to come in on Christmas Day—"just for a couple of hours in the morning in case there's anything urgent," she says pleading

Meanwhile, the Google Doodle for today, illustrated with pictures of Christmas Lights, is a search for "December Global Holidays".

Well, as Peter Brimelow says below (and has been saying here since 2015) why not import a global holiday like Boxing Day, instead of Kwanzaa or Festivus?

To see how it works, note that Christmas this year fell on a Wednesday, so Boxing Day is on a Thursday.  The British would conclude that there’s hardly any point in working on the Monday before Christmas Eve or for that matter going back to work just for Friday December 27.  Similarly, what's the point of working Monday December 30, when all civilized people take off December 31, New Year's Eve? Plus, of course, New Year's Day.