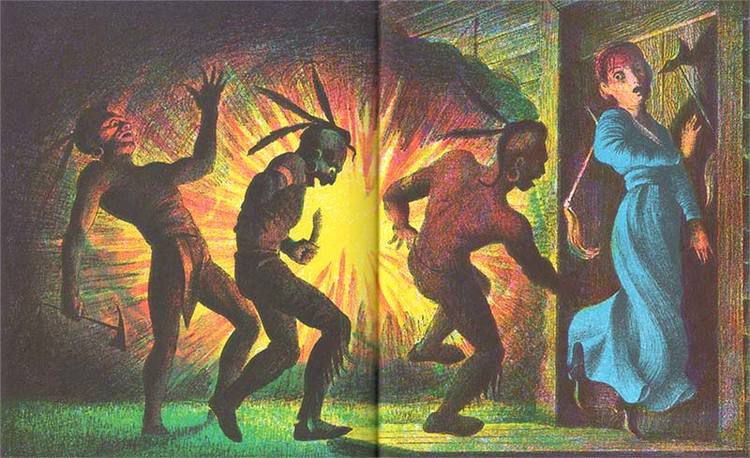 Thanksgiving—History From The Enemy's Point Of View

The Seattle Public Schools have issued an anti-Thanksgiving fatwa, with no thought for the fact that most of their students might actually give thanks to God for America and its many blessings. They're more concerned with the descendants of the people who lost the Indian Wars. They write

We recognize the amount of work that educators and staff have to do in order to fulfill our mission to successfully educate all students. It’s never as simple as preparing and delivering a lesson. Students bring with them a host of complexities including cultural, linguistic and social economic diversity. In addition they can also bring challenges related to their social, emotional and physical well being. One of our departments’ goals is to support you by suggesting ways to assist you in removing barriers to learning by promoting respect and honoring the diversity of our students, staff and families.

With so many holidays approaching we want to again remind you that Thanksgiving can be a particularly difficult time for many of our Native students. This website http://www.oyate.org/resources/shortthanks.html offers suggestions on ways to be sensitive of diverse experiences and perspectives and still make the holiday meaningful for all students. Here you will discover ways to help you and your students think critically, and find resources where you can learn about Thanksgiving from a Native American perspective. Eleven myths are identified about Thanksgiving, take a look at #11 and begin your own deconstruction.

This is their favorite myth:

Myth #11: Thanksgiving is a happy time.

Fact: For many Indian people, “Thanksgiving” is a time of mourning, of remembering how a gift of generosity was rewarded by theft of land and seed corn, extermination of many from disease and gun, and near total destruction of many more from forced assimilation. As currently celebrated in this country, “Thanksgiving” is a bitter reminder of 500 years of betrayal returned for friendship. Deconstructing the Myths of “The First Thanksgiving” by Judy Dow (Abenaki) and Beverly Slapin Revised 06/12/06

The site they're linking to is an irredentist Native American site that has, among other features, a list of book they want you to not read. I'll recommend one they disrecommend: The Matchlock Gun, by Walter Edmonds. Written in 1941, set in 1756, it's about a boy who saves his family from an Indian attack during the French and Indian War.

Yes, the Indians would have preferred to win the wars, and wipe out the settlers to the last man, woman, and child, but why should the rest of us care? And shouldn't the rest of us, the vast majority (including recent immigrants, of course,) be Thankful that civilization prevailed?

Is the Seattle Public School system not aware that Thanksgiving was intended to give thanks to God, after the fashion of the religion professed by most Americans—including almost all North American Indians? Surely that means it deserves as much respect as Ramadan? I'm waiting for a Ramadan letter from the Seattle School Board that reminds us of the many victims of Islam. I may have to wait a while.

This fatwa was brought to you by the Seattle Schools Department of Equity, Race and Learning Support [Contact them]

“We learn to be racist, therefore we can learn not to be racist. Racism is not genetical. [sic]It has everything to do with power.” -Jane Elliot

It was signed by the following people: