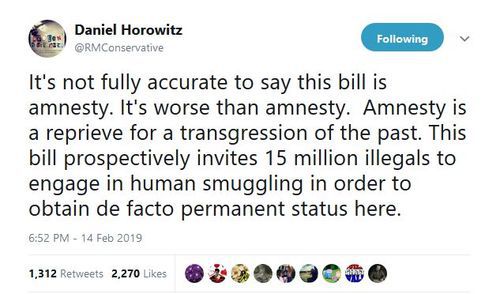 Thank goodness St Valentine's Day meant there was something to glow about this week. The political news just gets more depressing. I've been trying to hold on to some shreds of faith in our President, but he's making it awfully difficult. This week's fiasco, or Trumpasco, was of course the emergency funding bill out of Congress. Oh dear; oh dear, oh dear.

That funding bill is worse than bad: it's a catastrophe.

It contains some meager funding for border fences in crucial places on our southern border; but the local authorities in those places are given a veto on the actual building of the fences! Since all the jurisdictions concerned are, at best, deep-blue Democrat, and at worst, bought-and-paid-for by the Mexican smuggling gangs, there will be no fences.

The more you look at the bill, the worse it gets. There is a flat-out Amnesty provision in it for any illegal alien resident in the U.S.A. who says they might sponsor a unaccompanied-minor border-jumper, or who lives in a household with one, or who lives in a household that includes a person who might sponsor one, or whose cousin has a dentist who plays golf with a guy whose wife thinks she might know one.

As Daniel Horowitz has tweeted:

This bill is … worse than amnesty. Amnesty is a reprieve for a transgression of the past. This bill prospectively invites 15 million illegals to engage in human smuggling in order to obtain de facto permanent status here.

Quote from Dan Stein at the Federation for American Immigration Reform: "If this bill is enacted, expect the largest surge of unaccompanied minors this country has ever seen." [Experts: GOP/Dem Deal to Spark ‘Largest Surge’ of Young Border Crossers ‘Country Has Ever Seen’, by John Binder, Breitbart, February 14, 2019]

Enforcement is gutted by the bill, with a twenty percent reduction in detention beds and an expansion of catch-and-release.

It's not just illegal aliens who benefit. Legal immigration is stepped up, too. Numbers of H-2B visas—that's for non-agricultural, unskilled seasonal workers—are doubled. There's $3.4 billion for "refugee resettlement" so we can have more Somalis and Congolese to enrich us.

And so on. This bill is awful, unspeakably awful. It's an utter rebuff to everything Donald Trump campaigned on in 2016. Yet as we go to tape here at Radio Derb, we're getting confirmation that the President has signed the filthy thing. [White House Confirms Donald Trump Has Signed Government Funding Bill, by Charlie Spiering, Breitbart, February 15, 2019]

Not to worry, says the President: I'll declare a National Emergency and shuffle some funds over to pay for the fencing. He held a press conference Friday midday to tell us he was about to sign that declaration.

What's the point, Mr. President? Friday midday you signed a declaration that will let you build a fence here and there. Friday afternoon you signed a bill that gives Sheriff Gonzalez in Wackapaloosa County a total veto on your using his land, while simultaneously ripping the guts out of immigration enforcement and showering the world with guest-worker visas.

Remarks by President Trump on the National Security and Humanitarian Crisis on our Southern Border, February 15, 2019

Uh-huh. How long will all that take, Mr. President? What if the Supreme Court declines to take the case? What if they take it but rule against you?

Have you noticed the Strange New Respect Chief Justice Roberts has been getting from our elites lately? [In Surprise Abortion Vote, John Roberts Avoids ‘Jolt to the Legal System’, By Adam Liptak, New York Times, February 8, 2019] And Justice Ginsburg's back on her exercise bike.

And what about the Amnesties, and the increases in Catch-and-Release, and the H-2B visas? Will your National Emergency take care of those?

To compound his offenses, Trump has thrown Ann Coulter off the sled, though in the nicest possible way: "I like her, but she's off the reservation … But I haven't spoken to her. I don't follow her. I don't talk to her."

The rule I heard was, you go home with the feller that brung you. Flipping the sexes round here, if there was one person more than any other that brung Donald Trump to the White House, it was Ann. Now she's "off the reservation"—along with Steve Bannon and Jeff Sessions.

(I really miss Jeff Sessions. According to the Wall Street Journal, former FBI Deputy Director Andrew McCabe claims in his new book that Jeff said of the FBI: “Back in the old days you all only hired Irishmen. They were drunks but they could be trusted. Not like all those new people with nose rings and tattoos.” [Sessions said FBI was better off when ‘you all only hired Irishmen,’ according to McCabe book, by Caitlin Yilek, Washington Examiner, February 14, 2019] Spot on, Jeff. If it is indeed the case that FBI agents now sport nose rings and visible tattoos, that's a sad decline from the days of Efrem Zimbalist, Jr. Now there was a great Irishman).

I'm reluctantly coming to the conclusion that the blogger Z-man got it right: Trump's just a bag of wind, a “bullshitter who got very lucky.” [Not My President, March 1, 2018] He has no political skills and no firm core of belief on political issues. By the latter I mean that if he says something today, six months on he may be saying the opposite thing, with just as much apparent conviction—as indeed he has done on legal immigration.

I'm also getting the impression of a guy who is lazy and timid. By lazy I mean he hasn't made much effort to improve his understanding of key issues, or to get properly to grips with staffing chores. By timid I mean reluctant to challenge, to throw down gauntlets—like an executive order ending Birthright Citizenship. Sure, it might fail at last, but at least battle would have been joined.

Trump doesn't want battle, he doesn't want challenge. He wants to tweet, watch TV, and make gassy speeches full of empty promises that he'll renege on after his next meeting with Jared.

Alexander Hamilton told us that "Energy in the Executive is a leading character in the definition of good government."

What we have is lethargy in the executive. Congress, district court judges, and Deep State operators are calling the shots.

Wait, though: There is hope! William Weld has announced he'll challenge Trump in the GOP primaries next year!