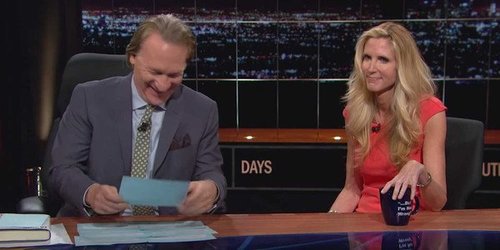 Throughout 2016, I would occasionally turn on the television to see how the punditocracy was responding to the mounting Trump tsunami. If you get most of your news online, watching cable news is frustrating. The commentary is so dumbed down and painfully reflective of speaker’s biases, you can always basically guess what’s coming next. With a few exceptions—above all Ann Coulter’s famous June 19, 2015 prediction of a Trump victory on Bill Maher—these pundits again and again told us that Trump would eventually go away, first after he made this or that gaffe, then after he “failed” in a debate, then after people actually started voting in the primaries.

Finally, after having been wrong at every point during the primaries, they just as confidently predicted that the Republican primary voter had foolishly done nothing more than assure that Hillary Clinton would be the next president.

The most interesting cases to me: the “Republican strategists,” brought on to CNN and MSNBC to give the audience the illusion that they were hearing both sides—Nicole Wallace, Steve Schmidt, Ana Navarro, Rick Wilson, Margaret Hoover, Todd Harris. Mike Murphy even convinced donors to hand him over $100 million to make Jeb Bush the next president! [Jeb's 2016 departure draws out Mike Murphy critics, By Maeve Reston, February 22, 2016]

With campaigns and donors throwing money at these people, and the Main Stream Media touting them, it was easy to assume they must have known what they were talking about. Significantly, each of these pundits was a national security hawk, center-right on economic issues, and just as horrified by “racism” and “sexism” as their Leftist counterparts. By a remarkable coincidence, the “strategic” advice that they gave to Republican candidates lined up perfectly with these positions. Their prominence was a mirage created by the fact that the MSM handed this token opposition the Megaphone because they did not challenge the core prejudices of the bipartisan Ruling Class. 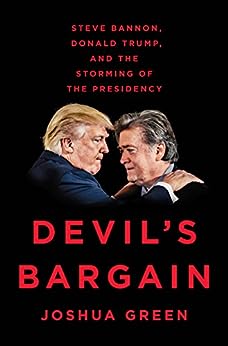 And of course they were all humiliated in a spectacular fashion, November 8 being only the climax. Joshua Green begins his book Devil's Bargain: Steve Bannon, Donald Trump, and the Storming of the Presidency by giving us a view inside the Trump campaign on election night, before tracing Steve Bannon’s path up to that point. Reliving the journey is one of the joys of Green’s work, which is mostly an intellectual biography of Steve Bannon, with a special focus on his relationship with Trump and the election.

Bannon joined the Trump campaign in the summer of 2016 without any previous experience in electoral politics. But like the candidate himself, the Breitbart editor showed that he understood the nature of American politics and the GOP base better than Establishment Republicans. The “strategists’” supposed “expertise,” “strategic advice,” and “analysis” was in reality built on a house of cards. (In fact, the Bannon-Trump view of the electorate is closer to the consensus among political scientists that, unlike more nationalist and populist policies, Republican Establishment positions have relatively little popular support. [Political Divisions in 2016 and Beyond |Tensions Between and Within the Two Parties, Voter Study Group, June 2017]).

One key example: Green recounts how after Obama’s re-election, the GOP Establishment was eager to surrender on immigration, supporting the bipartisan Amnesty/ Immigration Surge Gang of Eight bill. GOP leaders had neutralized Fox News, leaving Breitbart.com, talk radio and guerilla websites like VDARE.com as the only resistance. But the bill died due to a grass-roots revolt, partly inspired by Breitbart’s reporting on the flood of Central American “child” refugees the Obama Regime was allowing across the southern border. GOP House Majority Leader Eric Cantor lost his congressional seat in a shock upset in the primaries. And little over a year later, Donald Trump became a candidate for president with opposition to illegal immigration as his signature issue.

Bannon at Breitbart.com gave the Republican base what it wanted. Moral: in a democracy, you always have a chance at winning when public opinion (or at least intraparty opinion) is on your side.

Green traces Bannon’s journey from his Irish-Catholic working-class roots and traditionalist upbringing, to his time in the Navy, at Harvard Business School and Goldman Sachs, and finally Breitbart.com and the pinnacle of American politics. The picture that emerges is of a man with principles and vigor, refusing to submit to the inertia that is part of the human condition, with enough confidence to realize that life is too short to not make major changes when staying on the current path is not going to allow him to accomplish his goals.

For example, Bannon originally wanted a career in defense policy, and took a job in the Pentagon during the Reagan administration. Yet he was off to Harvard Business School when he realized that the rigid bureaucracy that he was a part of would not let him move up to a high-level position until he was middle-aged. Decades later, after taking over his website upon the unexpected death of Andrew Breitbart in 2012, it would have been easy to go low-risk—sticking to Establishment scripts, making life comfortable for Republican elites, implicitly submitting to the taboos of the Left. Instead, he helped turn Breitbart News into a major voice of the populist tide that has been remaking center-right politics across the globe.

When Donald Trump burst onto the scene, Bannon had found what he is quoted describing as a “blunt instrument for us,” a man who had “taken this nationalist movement and moved it up twenty years.”

From Green, we learn much about Bannon’s intellectual influences. Surprisingly, although he was raised as a Roman Catholic and maintains that faith today, we find out that Bannon briefly practiced Zen Buddhism while in the Navy. There are other unusual influences that make appearances in the book, including Rightist philosopher Julius Evola and René Guénon, a French occultist who eventually became a Sufi Muslim. Although not exactly my cup of tea, such eccentric intellectual interests reflect a curious mind that refuses to restrict itself to fashionable influences.

It’s incorrect to call Devil’s Bargain a biography. There is practically no mention of Bannon’s personal life—wives, children. I had to Google to find out that he has three daughters. His childhood is only discussed in the context of how it may have influenced his beliefs and political development.

Rather, we get information on Bannon’s intellectual and career pursuits and his relationships with consequential figures such as mega-donor Robert Mercer, Andrew Breitbart…and Donald Trump.

As Bannon exits the White House and returns to Breitbart, we must hope that Bannon and the movement he’s helped to create accomplish enough in the future to inspire more complete biographies.

But the rise of Bannon and Trump holds lessons for the Dissident Right. One of them: despite how powerful the Establishment may appear, there are fatal disconnects between it and the people it rules—for example, on social and identity issues. Thus, many members of this Ruling Class, such as the Republican strategists who predicted a Jeb or Rubio victory, have been more successful in deluding themselves than they have been in building any kind of effective base. Similarly, Clinton campaign operatives believed, without much evidence, that undecided voters would eventually break in their favor. Because the thought of a Trump presidency was too horrifying for them to contemplate, they refused to recognize polls showing a close race, ignored the Midwest and sauntered their candidate off to Arizona in the final days.

Of course, currently the ideas that Bannon fought for appear to be on the wane, leading him to declare upon leaving the White House that the “Trump presidency that we fought for, and won, is over.” [Weekly Standard, August 18, 2017]

But this is probably somewhat of an exaggeration. I doubt that Bannon laments the fact that the current president is Donald Trump rather than Hillary Clinton or Marco Rubio. But it has proved much more difficult to change government policy than to win an election. Unlike GOP strategists, the Deep State appears to know what it is doing.

In his memoir Nixon’s White House Wars, Pat Buchanan writes about how, despite playing a pivotal role in the election of 1968, the conservative movement was mostly shut out of high-level jobs:

Then there was the painful reality with which the right had to come to terms. Though our movement had exhibited real power in capturing the nomination for Barry Goldwater and helping Nixon crush the Rockefeller-Romney wing of the Republican Party, and though we were veterans of a victorious presidential campaign, few of us had served in the executive branch. We lacked titles, resumes, credentials…Our pool of experienced public servants who could seamlessly move into top positions was miniscule compared to that of the liberal Democrats who had dominated the capital’s politics since FDR arrived in 1933.

History repeated itself in 2016, when Donald Trump would win the presidency on a nationalist platform but find few qualified individuals who could reliably implement his agenda.

If nationalists want to ensure that their next generation of leaders is able to effectively implement the policies they run on, they are going to have to engage in the slow and tedious project of working their way up through powerful institutions.

Bannon may have been and remains an “outsider” to the political Establishment. But nonetheless, throughout his life he has leveraged elite institutions such as Harvard, Goldman Sachs, the Republican Party, and even Hollywood in order to become financially independent and free to pursue his political goals.

If enough of those on the Dissident Right forge a similar path, we can be sure that future nationalist political victories will be less hollow. Jeremy Cooper is a specialist in international politics and an observer of global trends. Follow him at @NeoNeoLiberal.