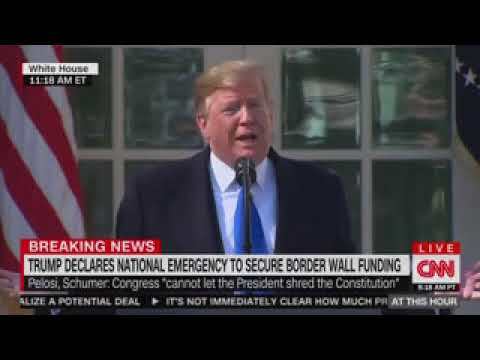 Trump Rejecting Ann Coulter's Wise Counsel—Which Got Him The Presidency

The Hill reported this earlier today:

President Trump said Friday he "just doesn't have the time to speak" to conservative firebrand Ann Coulter, who has been sharply critical of his decision to sign a bipartisan spending deal while declaring a national emergency to fund a southern border wall.

"In fact, I like her for one reason. When they asked her right at the beginning, ‘Who’s going to win the election?’ She said, ‘Donald Trump.’ And the two people that asked her that question smiled. They said, ‘You’re kidding, aren’t you?’ Nope. Donald Trump. So I like her." [More]

Trump literally doesn't follow Ann Coulter in the sense that he unfollowed her on Twitter. Ann has reacted strongly:
Ann Coulter Responds to Trump’s Slam: ‘The Only National Emergency is That Our President is an Idiot’,by Pardes Seleh, Mediaite, February 15, 2019.

It's important to remember that it was Ann's book, Adios America, that sparked Trump's run for the the Presidency. David Frum, reviewing Adios America for the Atlantic, said

What seems to have changed Trump’s mind is a book: Adios America by Ann Coulter. The phrase “political book of the year” is a usually an empty compliment, but if the phrase ever described any book, Adios America is it. In its pages, Trump found the message that would convulse the Republican primary and upend the dynastic hopes of former-frontrunner Jeb Bush. Perhaps no single writer has had such immediate impact on a presidential election since Harriet Beecher Stowe.

You may remember that when Trump announced, he said this:

All of that is true, especially the part about the rapists. But Trump wouldn't have known that if he hadn't read Adios America.

Below, something Trump hasn't forgotten, on June 9, 2015, Ann called the election for Trump, and the cast of the Bill Maher show laughed.