The man who committed the largest mass murder in Norway’s history seems to have been an actual Norwegian. Lawrence Auster writes

The hideous irony; and a huge victory for the anti-Western left 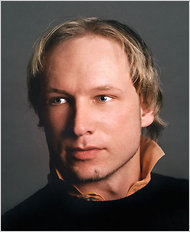 On the same day that I criticized the Department of Homeland Security video showing terrorists as neatly dressed young white men, a young blond Norwegian man committed, not just a terrorist mass murder, but the totally unprecedented, inconceivable act of a Norwegian man mass murdering his fellow Norwegians, most of them young people and teenagers; if he were a Muslim convert, the act would be conceivable, but he evidently has no connection to Islam. This monster, Anders Breivik, in addition to killing so many people, has made it OK for the anti-white leftists at DHS to do the very thing for which I was taking them to task. For all future time, whenever conservatives argue that terrorism warnings or surveillance in airports should center on Muslims, not on all of us equally, the liberals will be able to point to Breivik, and our argument for focusing on the Muslim threat will be stymied.[More]

Auster has more on this.

I received a letter from an English reader saying, in part

“This man seems to be a right-wing extremist, and I feel in some way sullied by that - that my opposition to immigration is somehow dragged in the mud by a man who thinks he is accomplishing something by killing nearly 100 young people. If anything is accomplished by this, it will be the opposite - that everyone who wants to keep the nation-state will fall under suspicion. “

It’s important to remember that Muslims don’t feel that way about Muslim terrorism, and neither the government nor the media try to make them feel that way.

When Muslim illegal immigrants committed the September 11 attacks, the President of the United States went to the mosque at the Islamic Center in Washington and declared that Islam is Peace.

“The face of terror is not the true faith of Islam,” said the president, escorted by Islamic clerics into the ornate mosque full of Turkish tile, Persian rugs and Egyptian paintings. “Islam is peace.” [Bush Visits Mosque to Forestall Hate Crimes September 18, 2001]

Academics first reaction was to establish a Society For The Protection of Enemy Aliens.

Is anyone going to establish a Society for the Protection of Norwegian Nationalists?  Is the prime minister of Norway going to visit the headquarters of the Norwegian nationalist party to make a similar declaration? I don’t think so.