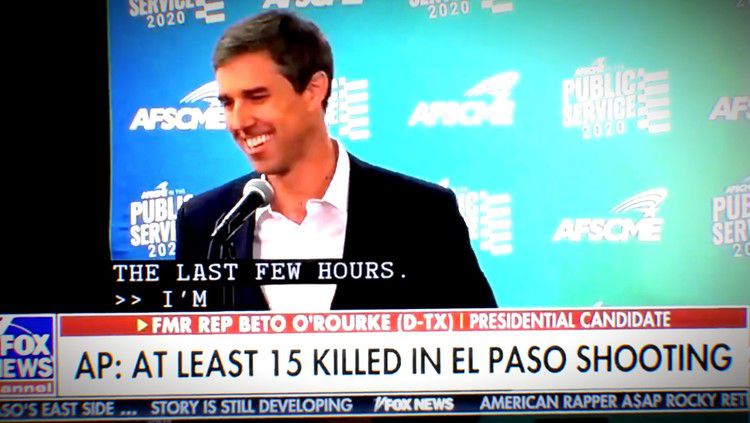 It was two days of contrast that tell us about America 2019.

In El Paso, Texas, and Dayton, Ohio, following the mass murders of Saturday and Sunday morning, the local folks on camera—police, prosecutors, mayors, FBI and city officials—were nonpartisan, patient, polite and dignified in the unity and solemnity of their grief for their dead and wounded.

But for the Democratic presidential candidates, the El Paso atrocity was like a loose football in the Super Bowl.

A mad scramble broke out over who would be first and most savage in indicting President Donald Trump for moral complicity in mass murder.

Never let a crisis go to waste is an old political adage.

And this crowd of candidates was not going to let that happen. Yet the naked political exploitation of these horrific acts, before the bodies of many had been removed from the crime scene, was appalling to behold.

Learning in Las Vegas of the slaughter at the Walmart in El Paso, his hometown, Beto O'Rourke flew back that same day and sped to the scene.

Railed Beto, Trump "is a racist and he stokes racism in this country ... and it leads to violence. ... We have a president with white nationalist views in the United States today." He called Trump's language about Mexican immigrants "reminiscent of something you might hear in the Third Reich."

Asked on Sunday by CNN's Jake Tapper if he believes the president is a "white nationalist," Beto eagerly assented: "Yes, I do."

Bernie Sanders, asked by Tapper if he agreed with Beto, replied:

"I do. It gives me no pleasure to say this ... all of the evidence out there suggests that we have a president who is a racist, who is a xenophobe, who appeals, and is trying to appeal, to white nationalism."

On the same CNN show, Sen. Cory Booker almost outdid Beto, "I want to say with more moral clarity that Donald Trump is responsible for this ... (mass murder in El Paso) because he is stoking fear and hatred and bigotry."

Elizabeth Warren issued a statement: "We need to call out white nationalism for what it is—domestic terrorism. It is a threat to the United States, and we've seen its devastating toll this weekend. And we need to call out the president himself for advancing racism and white supremacy."

Ironically, The Washington Times reports that the Dayton shooter, who killed his sister and eight others, "described himself on social media as a pro-Satan 'leftist,' who wanted Joe Biden's generation to die off, hated Trump, and hoped to vote for Sen. Elizabeth Warren for president."

"I want socialism, and i'll not wait for the idiots to finally come round to understanding," Connor Betts, the killer, reportedly tweeted.

Not to be left behind, Sen. Kamala Harris said of the president after the slaughter, he's "a racist, there's no question in my mind."

These attacks, unprecedented in their savagery, testify to a hatred of Trump that is broad, deep and implacable, and unlikely to be constrained before November 2020.

Folks still speak wistfully of a return of the unity America once knew and of a coming together to stand again on common ground.

But where is the evidence for that hope?

If Trump's fabled base is going to stand loyally by him, and the Democratic candidates are going to unleash this kind of bile against him, whoever wins in 2020 will be not be able to unite us, absent a Pearl Harbor-style attack on this country.

Clearly the issue in the 2020 campaign is going to be Trump.

Is impeachment now back on the table? How can it not be?

Though Robert Mueller found no collusion between the 2016 Trump campaign and the Russians, support for impeachment hearings passed the midway mark inside the Democratic caucus in the House last week, even before the horrible weekend.

And if Democrats believe about Trump what their candidates say about him—that he is a white nationalist racist and xenophobe deliberately stoking fear, hatred and violence, whose words and actions call to mind the fascist Italy of Benito Mussolini and Third Reich of Nazi Germany—how can the Democratic leadership credibly not try to impeach him?

Yet, blaming the massacre in El Paso on the rhetoric of Donald Trump is a charge that can come back to bite his attackers. Neither the right nor left has a monopoly on political extremism or violence. And the hate-filled rhetoric of the left this last weekend exceeds anything used by Trump.