New Zealand Prime Minister Jacinda Ardern was “wearing a cream headscarf” a.k.a. a hijab when she greeted Prince William this week. ['You showed how to respond to hate - with love': Prince William gives stirring speech at Christchurch mosque where 42 were killed - as he tells survivors 'we must unite' to fight terrorism, by Ben Hill, Dailymail.co,uk., April 25, 2019]

Her notoriously emotional reaction to the Mosque massacre is an extreme example, but there is little question that female involvement alters the nature of politics. It is perhaps unsurprising, then, that a recent study by Georgetown University has found a significant number of people still believe that women shouldn’t hold high political office. [May the Best Woman Win?, by Anthony P. Carnevale et al., Georgetown University, 2019 (PDF)] Could they be right?

According to the study, 13% of people still answer the question “Are men better suited emotionally for politics than most women?” affirmatively—down from around 50% in the mid-1970s, but still striking after fifty years of relentless Politically Correct propaganda and SJW enforcement. And, as the authors of the study lament, “in races as close as those of the recent past, even a small bias can make a big difference.” 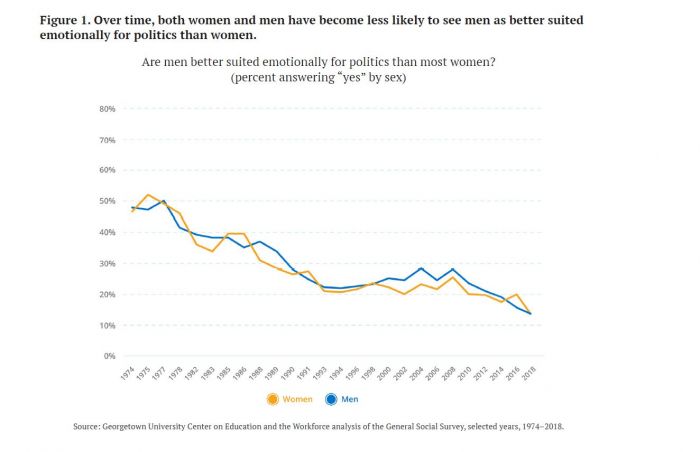 Interestingly, as many women agree with the proposition as men. This has been roughly the case over time. And there is little age difference in the strength with which it is held. Of those surveyed, 16% of women over 35 and 13% of women under 35 believed that “men were better suited emotionally for politics.”

There is, however, a big class difference. The research group found that:

Nevertheless, an unreconstructed (deplorable?) 7% of Americans with Master’s degrees or higher still told the pollsters that men are emotionally better suited to politics than women.

Needless to say, the Main Stream Media is aghast that anybody could still think such unthinkable thoughts in the Current Year. For example: “Are women ‘too emotional’ for public office? Even after Trump, some people believe that”, by Amanda Marcotte, Salon, April 16, 2019]. Having led with this obviously fallacious “appeal to anecdote” and “faulty generalization” in which a sample of one undermines a robust stereotype, Marcotte  writes:

. . . we're subject to daily, often hourly reminders that Trump has lived on earth for 72 years and still has the impulse and emotional control of an especially trying toddler. Despite all this, however, significant numbers of Americans — and Trump voters in particular — still believe that's it's women who do not possess the emotional maturity required of those who seek high office.

In terms of the veracity of stereotypes based on a sample of one person, we might ask, “Is it a coincidence that this fallacious, emotion-driven diatribe has emanated from a woman, and one of Italian ancestry at that?”

In fact, of course, there is an enormous amount of evidence that “stereotypes” are generally empirically accurate. [Social Perception and Social Reality: Why Accuracy Dominates Bias and Self-Fulfilling Prophecy, by Lee Jussim, 2012]

The decline in Americans willing to tell pollsters they are dubious of women in politics a shame, because there is abundant data indicating sound empirical reasons for these “outdated” and “sexist” attitudes which are held even by 10% of Democrat voters.

It is a simple fact that females are more “emotionally unstable” than males. Psychological analyses all agree that by the time females reach adulthood, they are significantly higher in the personality trait “Neuroticism” than are males of the same age. [See Age differences in personality traits from 10 to 65: Big Five domains and facets in a large cross-sectional sample, by C. Soto et al., Journal of Personality and Social Psychology, 2011].

Neuroticism is characterized by “feeling negative feelings strongly,” with the opposite of Neuroticism being “Emotional Stability.” Such “Negative Feelings” include sadness, anger and jealousy. But females score particularly strongly on “anxiety”—possibly because, in prehistory, the children of anxious, protective mothers were less likely to get seriously injured. But the key point is that the stereotype is correct.

And people are also correct to think that women —that is, those who, on average, score higher in Neuroticism—will be less able to cope in the brutal world of power-politics.

Successful politicians —the ones who get into their country’s legislature but don’t make it to the very top—score significantly lower than the general public in Neuroticism, according to research published in the leading psychology journal Personality and Individual Differences. [The personalities of politicians: A big five survey of American legislators, by Richard Hanania, 2017]

And this research reveals something very interesting indeed. These “successful politicians,” while being more emotionally stable than most voters, score higher in the personality traits Extraversion (“feeling positive feelings strongly”), Conscientiousness (“rule-following and impulse control”) and Agreeableness (“altruism and empathy”).

But this does not tend to be true of those who reach the very top of politics—and especially not of those who are perceived as great, world-changing statesmen. They tend to be highly intelligent but above average on quite the opposite personality traits – psychopathology and Narcissism [Creativity and psychopathology, by F. Post British Journal of Psychiatry, 1994]. However, high Agreeableness, Conscientiousness and Extraversion are true of successful politicians in general.

In much the same way, run-of-the-mill scientists are above average in Agreeableness and Conscientiousness but genius scientists combine being relatively low in these traits with stratospheric intelligence. This gives them creativity, drive and fearless to be original. [At Our Wits’ End, by Edward Dutton and Michael Woodley of Menie, 2018, Ch. 6]

This is important, because these are typically female traits: women score higher than men in Agreeableness, Consciousness and Extraversion. This means that, in general, we would expect the relatively few females who do reach high political office to be fairly atypical women: low in mental instability and certainly moderately low in altruism, empathy or both—think Margaret Thatcher, who according to Keith Patching in his 2006 book Leadership, Character and Strategy, was organizing her impending Bar Finals from her hospital bed having just had twins; or even Theresa May. Neither of these British Prime Ministers have (or had) neither of whom have particularly “feminine” personalities, though they may reflect (or have reflected) very pronounced Conscientiousness, a trait associated with social conservatism. [Resolving the “Conscientiousness Paradox”, by Scott A. McGreal, Psychology Today, July 27, 2015]

But, sometimes, a female politician’s typically anxiety will apparently be “compensated” for i.e. overwhelmed by her having massively high Agreeableness and Conscientiousness. This likely occurred in the case of Jacinda Ardern, who suffers from intense anxiety to the point of having being hospitalized.

This will become a problem in a time of crisis when, as happened with Ardern, such a politician will become over-emotional. This, combined with very high empathy, would seem to partly explain Ardern’s self-identification with New Zealand’s Muslims to the extent of donning a head scarf and breaking down in public.

But it also explains why females, on average, tend to be more left-wing than males and more open to refugees. They feel empathy and even sadness for the plight of the refugees more strongly than do men [Young women are more left wing than men, study reveals, by Rosalind Shorrocks, The Conversation, May 3, 2018

This means that there will be a tendency for females to push politics Leftwards and make it more about empathy and other such “feelings.” It also means that, in a serious crisis, they may well even empathise with the enemy.

In that gay men are generally feminized males, this problem help would to explain why people are skeptical of the suitability of homosexual men for supposedly “masculine” professions (such as politics) [The extreme male brain theory of autism, by Simon Baron-Cohen, Trends in Cognitive Sciences, 2002], sometimes including political office. [The Hidden Psychology of Voting, by Zaria Gorvett, BBC News, May 6, 2015]