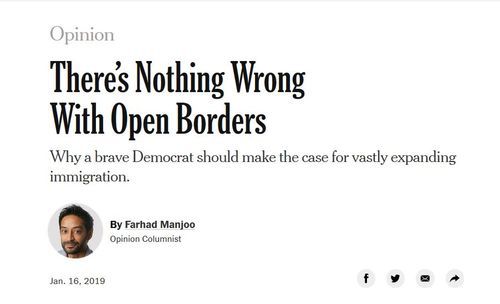 John Derbyshire has written that "If there is hope, it lies in the comment threads."  And, indeed, there are some good examples of pushback to Manjoo in the comments accompanying his article.  In particular, I noticed three potent comments in succession:

Brings to mind a resonant line from an Eagles song: “Call some place paradise and kiss it goodbye.” It is difficult to read this essay and many of the comments without feeling grateful for having reached a mature age during a marvelous era in a truly wonderful country. I tremble for our children’s future when arguments such as this are published in one of our most respected forums, but sleep soundly in the knowledge that I will not be around to “kiss it goodbye.”

Here's the second one:

Father of One
Oakland

"People worry they’ll take jobs away from native workers, even though most studies suggests that immigration is a profound benefit to the economy."

Actually, in many industries, immigrants will (and do) take jobs away from American born workers. And when you say the "economy" will benefit, what you really mean are that asset owners (i.e., shareholders) will benefit. Let's call a spade a spade.

I can only assume that the author leaves the door to his home unlocked and has put up a sign that says, "Illegal Immigrants Come In and Stay."

People want to move to the U.S. from third world nations to benefit from America's much higher capital intensity ($200,000 per capita). unfortunately, every immigrant that doesn't bring $200,000 in capital with them dilutes the capital available to support the people already here. This results in lower [Maybe a word missing here? -- PN] and overcrowded roads, schools, and hospital ERs. Accordingly, it is reasonable for America to only admit people who bring enough to the table to make the people already here better, rather than worse off.

That paragraph about capital stock by Louis is an excellent rejoinder to the typical libertarian's economy-uber-alles "argument."

Finally, here's someone's reply to a prior commenter who was impressed by libertarian claims about the bonanza that would result from open borders:

I replied to Anna that she'd made an excellent, terse summary of an important fact regarding who really benefits from mass immigration.  Steve Camarota of the Center for Immigration Studies had spelled out this point a bit more explicitly in National Review:

Immigration reduces the wages of natives [who compete] with immigrant workers by $493.9 billion annually, but it increases the income of businesses by $548.1 billion, for a net gain of $54.2 billion.

[So What Is the Fiscal and Economic Impact of Immigration?, September 22, 2016]

In other words, our current regime of mass, unskilled immigration contributes to the economic disparities that liberals so often condemn when they rattle on about “inequality” and “the 1 percent.”