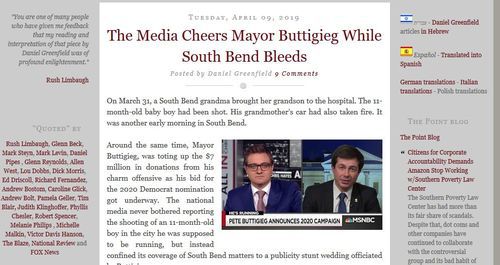 John Derbyshire: If Mayor Buttigieg Were Any Good On National Question, I Wouldn’t Care If He [Expletive Deleted]. But He’s Not.

Three weeks ago I passed some noncommittal remarks about Democratic Presidential candidate Pete Buttigieg, the 37-year-old Mayor of South Bend, Indiana. That was by way of arguing that from the point of view of the Democratic Party, an ideal candidate would be a non-crazy, unthreatening person with just a smidgen of diversity to bring out the SJW voters.

Buttigieg, I argued, fills the bill because he's homosexual—that's the smidgen of diversity—but otherwise comes across as a regular guy. He doesn't want to persecute Christian bakers or boycott fast-food outlets.

Since then, Beto O'Rourke's star has faded as people have noticed his weirdness and hyperbolic vocabulary. For just the reasons I spoke about—non-crazy, unthreatening, smidgen of diversity—Mayor Buttigieg has filled the void, now that we've all figured out how to pronounce his name.

So I've been taking a closer look at Mayor Buttigieg. From what I can gather about his positions on the National Question, there's no way I could vote for him, unless the Republicans were to dump Donald Trump and nominate Jeff Flake. I'm just trying to figure whether Buttigieg would be a plausible Democratic candidate next year.

My inquiries started out in negative territory—I mean, with a disposition to think he's not a serious candidate.

There's that name, for example. No, not the surname: Nobody can help his surname, and I'm guessing Buttigieg had stopped being bothered about jokes directed at his surname by the time he got to First Grade, at the latest.

No, it's not the "Buttigieg," it's the "Pete" that irks me. Having lived through the Jimmy Carter Presidency I am inoculated for life against Presidents who want to be referred to by a juvenile diminutive. If the U.S.A. were ever to elect a President who called himself Timmy, I swear I would renounce my citizenship.

Plus, I can never quite get out of my mind the old English schoolyard joke.

Q: What do you call an Irishman who's been dead and buried for five hundred years?

And then, still on the negative side, there was the business about Buttigieg speaking seven languages. I was skeptical, I'll admit. Linguistic prowess, like sexual prowess, is easy to boast of but much less easy to demonstrate to a skeptical public.

Certainly there are people with a talent for acquiring languages. The 19th-century English writer George Borrow was exceptional in that line. Ann Ridler's careful, scholarly study of Borrow's language skills concludes that he had reading competence in 51 languages and speaking competence in 20. It happens. And yes, that sound you hear is my teeth grinding: I'm hopeless at languages myself, so I come at this topic freighted with envy.

Where the boasts of politicians are concerned, however, skepticism is always in order. Buttigieg added an extra layer of skepticism by claiming to have learned Norwegian so he could read a particular writer of that language in the original.

When I first read that I thought: Wait a minute … Didn't James Joyce learn Norwegian so he could read Ibsen? Yes he did. Had Buttigieg read that fact somewhere and just … appropriated it? I was suspicious.

Too suspicious, at least where Norwegian was concerned. The Washington Post website has a video clip of Buttigieg answering questions in Norwegian.

He doesn't sound too sure of himself in the language; but he understands the questions and gives some kind of answers, and the Norwegians seem happy.

That raised my estimation of the guy somewhat. But then I read Daniel Greenfield's April 9th takedown of Buttigieg and his city. South Bend, says Greenfield, is a public-sector plantation—a typical "empty sandwich" Democratic city with a big violent black and Hispanic underclass, a white lefty elite class, and nothing much in between.

But didn't Buttigieg win re-election as mayor with eighty percent of the vote? Yes he did. What the media doesn't tell you is the actual numbers who voted for him: eight and a half thousand in a city of a hundred thousand.

In other words, South Bend got Buttigieg the way New York City got de Blasio: by hardly anyone bothering to vote, other than public-sector union members and professors of Gender Studies. Meanwhile the homicide rate is worse than Chicago's.

South Bend is a human tragedy. And while Buttigieg isn't solely responsible for [its] woes, he has exploited it, instead of trying to fix it, using buzzwords and gimmicks to build a national brand …

So far he's been proven right.

Appropriate for Good Friday, and Passover, the story of Pete—dammit, Peter—Buttigieg's rise has a religious sidebar.

He's been mayor of South Bend since January 2012. That means that his mayoral terms have completely embraced Michael Pence's four-year governorship of Indiana, the state in which South Bend sits…or festers. Pence has of course been Donald Trump's Vice President since 2017.

Mayor Buttigieg and ex-Governor Pence are both devout Christians: the mayor an Episcopalian, the Vice President an evangelical. Buttigieg is a homosexual who is married to another guy; Pence is a biblical literalist who believes homosexual intercourse is against the law of God.

Hence the following, from an interview Buttigieg granted to CNN this week:

That was a huge issue for us in Indiana when he advanced [and then retreated from] a discriminatory bill in 2015 under the guise of religious freedom that said it was lawful to discriminate provided you invoke religion as your excuse. And I just believe that's wrong.

And to this day, if you listen closely to what he says, you'll notice that to this day he has not brought himself to say that it shouldn't be legal to discriminate against people in this country because they're LGBT. In most parts of this country you can still be fired, denied housing, denied services because of who you are. He seems to be OK with that. I would love to see him evolve on that issue.

I found that objectionable in several different ways. Speaking as a Freedom Of Association absolutist, I'm fine with discrimination. If you want to fire me, or don't want to hire me, or don't want to serve me, or rent a room to me, because I'm white, or male, or heterosexual, or have a British accent, or am too old or too conservative, I'm fine with it. I'll go elsewhere.

Laws against discrimination are a money pot for the shyster attorneys who promote them, and who finance the politicians that pass them; for the rest of us, they are an insult and a nuisance.

And then there's that prissy millennial usage "LGBT." If pressed on the matter, I might allow that there's a hole in our language here. We need some clear, short way to say "sexually eccentric," now that "freak" has gone out of fashion. No, I don't want to bring back "freak"; that would be more trouble than it's worth. I just think we need a plain word, preferably just one syllable, in place of that pretentiously managerial Human-Resources-Department-speranto "LGBT."

Mr Mayor: If I whack you upside the head with a loaded pool cue, I will have hurt you, and the law supplies you with remedies. If I sign a bill to prevent homosexual scout masters from taking young boys on camping trips in the woods, I haven't hurt anybody. Where the children are concerned, much more likely the contrary—I have saved them from hurt.

What I mostly dislike about that clip, though, is the glimpse it gives us of the iron fist inside the CultMarx velvet glove. The mayor tells us that he would love to see the Vice President, quote, "evolve" on the issue of discriminating against sexually eccentric people. "Evolve"—to a higher form of life, you see? To get on the right side of history! Our side! Or else …

In this little engagement with the Vice President, Buttigieg is punching down. Behind that engaging boyish smile, if you watch closely, you can glimpse the sneer of cold contempt, the arrogance of power.

And what about the homosexuality thing? Is that likely to help Buttigieg in a general election, or hurt him?

That's hard to call. I hear that Democratic strategists are worried that a homosexual candidate might lose them black votes; and of course it would be interesting to hear what our Moslem congressgals think about it.

Public attitudes have liberalized a lot this past twenty years. Still, on the poll numbers I've looked at, they haven't liberalized as much as I'd have guessed, or as Social Justice Warriors would have wished. There is still a big block of Americans who are negative on the issue.

For how many, though, is it a deal-breaker? That's the thing it's really hard to know. Polls tend to emphasize the binary aspect, for-against, and forget all the shades of intermediate opinion people have: mild disapproval, grudging acceptance, not-much-bothered-either-way.

Speaking for myself, I'm wary of admitting homosexuals to positions of power. They have a way of taking over and corrupting institutions they are let into: The courts of at least two English kings illustrate the problem. So, come to think of it, does Mayor Buttigieg's church, the Episcopal Church, which is now pretty much just a dating club for homosexuals.

That said, however, there are issues of salience. To borrow a figure of speech from Lady Ann: If we had a homosexual President who got Congress to pass real patriotic immigration reform—an Israeli-style border fence, compulsory E-verify, visa tracking, moratoriums on legal immigration and refugee resettlement—if we had that guy as Chief Executive, I wouldn't care if he let himself be buggered on the White House lawn in broad daylight.