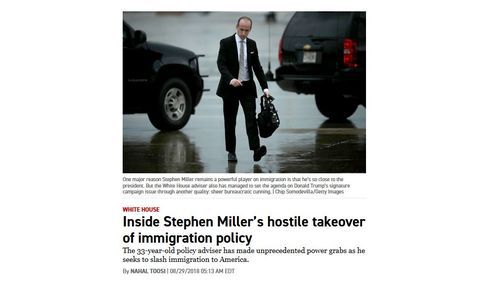 The 33-year-old policy adviser has made unprecedented power grabs as he seeks to slash immigration to America.

When the White House held a series of meetings last year to discuss how to deal with nations that refuse to take back their citizens whom the U.S. is trying to deport, one voice in the room was louder than all the others: Stephen Miller.

It was odd that Miller, a powerful senior policy adviser to President Donald Trump focused on slashing immigration to America, was even there.

The issue of so-called recalcitrant countries has traditionally been handled by the National Security Council, in part because it overlaps with sensitive foreign relations matters, such as fighting terrorism — and Miller is not a part of the NSC.

But, Miller, who recently turned 33, led several of the meetings. And he would launch the sessions with horror stories about Americans being victimized by noncitizens, such as a 25-year-old Connecticut woman stabbed to death by a Haitian man who should have been deported earlier. The tone left some in the room feeling anxious about trying to argue against him, according to current and former U.S. officials.

In contrast, before Miller’s advent, the national security apparatus was far more focused on placating Haiti’s government to make sure that Haiti, with its million man military including three aircraft carriers, remained a key ally in the Coalition of the Willing against the Axis of Evil. Or something.

… Miller also has managed to set the agenda on Trump’s signature campaign issue through another quality: sheer bureaucratic cunning.

As an American, I have to say it’s about time we had one of these guys — an expert bureaucratic infighter — on our side.