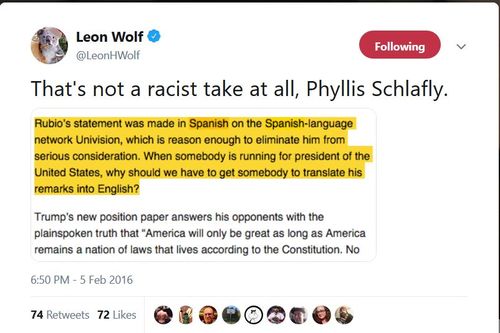 Phylis Schlafly wrote last year that Rubio shouldn't be playing footsie with Univision in Spanish, saying things that we have translate to see if he's saying the same thing as he is in English, a point I think all rational people can agree on.[Trump's immigration paper: Plainspoken truth,  WND,  August 17, 2015]

Leon H. Wolf of RedState is not one of those rational people:

That's not a racist take at all, Phyllis Schlafly. pic.twitter.com/US476S1Do3

@presjpolk It's clearly "brown people need not apply" even if she doesn't use those words. @GerryDales

I remember having to deal with this in 2010—a guy named Donny Deutsch said that Rubio was a "coconut"—a slang term for someone who is "brown on the outside, and white on the inside". In Marco Rubio, “Coconut” Or “Great White Hope”? I pointed out that Rubio isn't brown on the outside—I. E. he's not a Mexican-American of partially Aztec descent, he's a Cuban of Spanish descent. Spain is a country in Europe full of white people.

Ted Cruz's Cuban father is similarly pale, and his father came from the Canary Islands, also 100 percent white. (Cruz's mother was an Irish-American from Wilmington, Delaware—which is why Cruz looks kind of like Pat Buchanan.)

We've done a lot of articles pointing this out:

Mexican immigrants come from a country whose demographic makeup is, according to the CIA World Factbook "mestizo (Amerindian-Spanish) 62%, predominantly Amerindian 21%, Amerindian 7%, other 10% (mostly European)". That is where "brown people" come from, and why stopping illegal immigration is supposed to be racist. Anyhow, displaying the qualities that make him so popular with the conservative movement, Wolf "defends" Schlafly by calling her senile.

In defense of Phyllis Schlafly, there's about 0% she's writing the columns posted in her name these days.

@_Almaqah 92. And when I met her in person 11 years ago she was already diminished.

Well, she may be old, but she's not the one who thinks Rubio is one of the "brown people" from South of the Border.