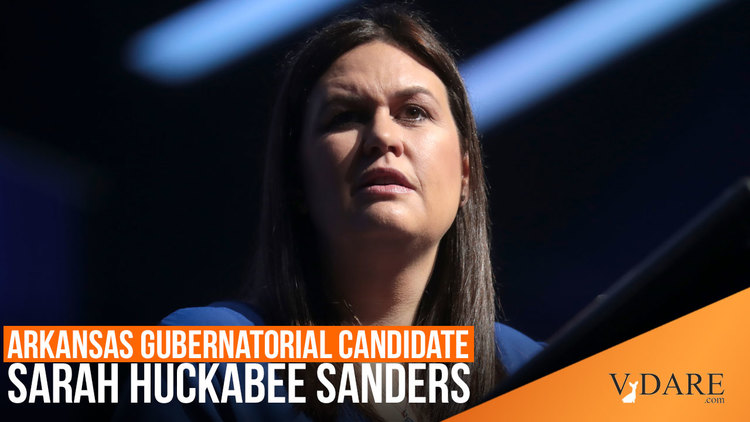 Still The Stupid Party In Arkansas

This morning, I received the first fundraising email from Sarah Huckabee Sanders’ gubernatorial campaign, via a “special message” from Breitbart News. In it, Sanders touts her status as “only the third woman” to serve as White House Press Secretary. She claims that she does not call attention to her sex as a form of “identity politics,” or “checking a box,” but continues very shortly thereafter to note that she would be the first female Governor of Arkansas.

In spite of the fact that Mrs. Sanders spent years as the public face of the Trump Administration, her fundraising letter mentions nothing about immigration.

Mrs. Sanders bleats the standard Republican line against “socialism,” as if that has anything whatsoever to do with the ongoing Great Replacement and annihilation of the Historic American Nation, before waxing lyrical about what she considers to be the greatest parts of Arkansas.

What does Mrs. Sanders name first in her list? Walmart, the evil corporation which donated one hundred million dollars to the domestic terrorists at Black Lives Matter, engineered the removal of the Confederate memorial in my hometown of Bentonville, and, perhaps more than any other company, is responsible for the sellout of America to China.

Mrs. Sanders goes on to cry that Arkansas is “where Daisy Bates and the Little Rock Nine struck a blow against racism and blazed a trail for civil rights.” Actually, President Eisenhower and the 101st Airborne, aided by the federalized Arkansas National Guard, invaded the sovereign State of Arkansas and “blazed a trail for civil rights” at gunpoint. This is, of course, also a dig at then-Governor Orval Faubus, the greatest of our Governors.

Interestingly, Mrs. Sanders does correctly refer to our State as God’s Country—which it is—and, again correctly, states that “you haven’t lived until you float the clear, free-flowing waters of the Buffalo River.” The very same Buffalo River, Sanders fails to acknowledge, which would not exist as a protected National River were it not for the efforts of former Governor Faubus.

Why would Sarah Huckabee Sanders feel such a need to prioritize the Little Rock School Crisis in her first fundraising message, especially for a State in which blacks play no demonstrable role, save for the putrid hellholes of Little Rock and Pine Bluff? Why is the Republican Party so obsessed with becoming the “real party of women” or the “real party of blacks”? Mrs. Sanders, it would appear, is more of the same. I urge her to abandon whatever consultant she has retained, and speak to her would-be constituents instead.