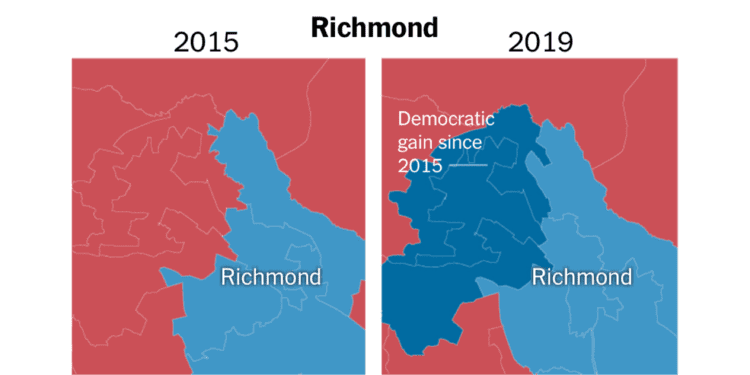 Republicans are falling all over themselves to claim that they lost Virginia not because of demographic change, but because President Donald Trump is a big meanie who cost them votes in the suburbs.

Trump is the walking, talking Democratic get-out-the-vote operation in America’s suburbs. As those New York Times numbers from earlier this week indicated, he’s still got a path to 270 votes in the Electoral College. But he’s going to have to do it without a slew of suburban voters who were once in play for the GOP.

Liberal journalists know what's really happening and are bragging about it.

Not long ago, this rolling green stretch of Northern Virginia was farmland. Most people who could vote had grown up here. And when they did, they usually chose Republicans.

“Guns, that is the most pressing issue for me,” said Vijay Katkuri, 38, a software engineer from southern India, explaining why he voted for a Democratic challenger in Tuesday’s elections. He was shopping for chicken at the Indian Spice Food Market. “There are lots of other issues, but you can only fix them if you are alive.”

Mr. Katkuri’s vote — the first of his life — helped flip a longtime Republican State Senate district and deliver the Virginia statehouse to the Democratic Party for the first time in a generation. It was a stunning political realignment for a southern state, and prompted days of prognosticating about President Trump’s own standing with suburban voters nationally in 2020. But while political leaders come and go, the deeper, more lasting force at work is demographics.

As VDARE.com reported earlier this week, the "suburbs" aren't white anymore. Those white upper-class suburbanites that do exist are probably hostile to Trump because supporting him is seen as socially undesirable, at least in the eyes of the Media/Entertainment/Educational class that shapes public opinion.

What we are really seeing is something that I'm increasingly persuaded is nothing less than a key to human history. The Indian workers imported by American companies for cheap labor vote against the GOP. Population increase also leads to the destruction of rural life and entrenched cultures. Instead, they are replaced by overpopulated settlements where "culture" is simply dictated from the top down, in our age by television, newspapers, and an increasingly censored and policed Internet. Immigrants have no emotional stake in the country's history or culture. Indeed, most resent it, want to see it destroyed, and see immigration as a way of striking back against ethnic enemies. Cheap labor is nothing less than the destruction of nations.

For that reason, any nationalist movement that actually wants to preserve a people or its political expression (a nation-state) can't be committed to just "free markets." They destroy themselves and the country with them.

However, because the GOP and Conservatism Inc. are so thoroughly dominated by donors, we can't have this conversation. Instead, I expect more brain-dead Republican rhetoric about "fighting socialism" until Texas, Florida, and Georgia tip blue because of the same dynamic that flipped Virginia.

(For more, see Conservatism Inc: The Battle for the American Right, available at Amazon, Arktos Publishing or Barnes & Noble.)